I was working at the publications building at Ananda Village one day in the summer of 1976, when Swami Kriyananda stopped by. He asked for my help with photographing some art for a project he was working on.

I followed Swamiji and several members of the publications staff outdoors where the light was better for photography. Swamiji described the pink paper he wanted for the background. I went up to the print shop to look for the paper – I had no idea if we had the right color, so I told Divine Mother I didn’t have a clue, and I asked for Her help. The first place I looked, in the middle of a huge stack of colored sheets, there it was. Swami liked the paper.

I arranged the materials on the ground and knelt and took several photos. It was hot – over 100 degrees – and muggy. My mind was reeling from the heat. I thought that perhaps Swamiji could do a better job, since he would be more detached from the heat than I was. I asked if he wanted to take some pictures, and he instantly said, “Sure!” and fairly leapt up from the couch.

As he knelt over the camera, I saw that he was breathing heavily and that he was perspiring. His hands were shaking from the effort. This simple event showed me that Divine Mother doesn’t care if we don’t “look good” in our service (ashram images of white robes and candlelight!) so long we are eager and willing.

My first three years living at the Village weren’t easy. I had endless moods and depressions. One day I was in my little cabin, sunk in a sad mood, when it occurred to me that each time I had risen above my feelings and done something serviceful, I had been able to emerge from whatever cloud was hovering over me.

I walked up the hill to Pubble, thinking, “My spirits may be sagging, but at least I can show up and serve.”

At the time, Asha was the publications manager. Her office was just off the entry hall. When I opened the front door, I saw that all the people who worked in the building were packed in that tiny space. There were probably 15 people there, and I realized they were talking with Swamiji. Not wanting to pull the energy down with my mood, I tried to ease quietly by. But then I heard Swamiji’s voice, clear and cheerful. “Hello, Rambhakta! How are you?” He parted the crowd and smiled at me.

I realized that God didn’t care at about my mood. He was encouraging the little bit of bright energy I had summoned. I immersed myself in service and after 30 minutes I realized I was feeling pretty darn good – very light and happy.

In those early years, some of the most radiant examples of cheerful service were the nuns – Asha, Seva, Anandi, Parvati, Kalyani, Arati, and their sisters were beacons of light, giving their lives to Master’s work.

At one point, Swamiji was scheduled to give a talk in San Francisco. It was a big event, and Asha was in charge of the preparations. Later I heard her remark that she hadn’t slept in three days, and that after the event she realized she hadn’t even thought about herself in those three days!

Despite these early lessons, I continued to resist Ananda’s emphasis on service. I had come to the community to meditate and pray, and I expected to serve only enough to help keep the community going. I certainly didn’t see service as a central part of our lives. And I couldn’t imagine how the rewards of serving could possibly be equal to those of prayer and meditation. I considered sadhana to be a vastly superior path. It took me twenty years to realize how wrong I was!

Over the years, I noticed a strange thing. Throughout the long years that I resisted serving, my meditations were seldom very good. I thought, “Well, I’ve just got to develop more devotion.”

One day when I was feeling particularly upset over my lack of inspiration I told Seva, the leader of the nuns, “Wouldn’t it be good if in our lives here at Ananda, we could emphasize devotion more?”

Seva looked at me with exasperation. She said, “Rambhaaaaaakta!! We’re here to build this work! Besides, it’s just for this one lifetime!”

Later, I thought that was quite funny. But she had hit the nail on the head!

One evening toward the end of my “resistance” phase, I lay in bed and talked with God and Guru. I said, “In my life at Ananda, I’ve blown it! By going my own way, I haven’t found the joy that I was seeking. I’ve meditated for as much as five or six hours a day, and at one point I chanted for an hour and a half every single day for five years. And still I haven’t found anything like the joy I see in others. I give up! I’ll do whatever You say!”

The next day, I phoned the community’s job coordinator, Steve Weber, and asked if there were any openings in the Village businesses. I thought it would be lovely if I could find a job that would match my personality – perhaps running a computer in the depths of the publications building. But deep down, I knew it wouldn’t work out that way.

Sure enough, Steve said there was a job at Master’s Market, smack in middle of “downtown Ananda.” I laughed merrily and took the job. I worked at Master’s Market for the final year and a half that I lived at the Village, enjoying it tremendously.

Over the years, I had built up a large debt. Some years I made a lot of money, yet I was always behind. But from the moment I accepted that humble, low-paying job at the market, my financial woes began to improve. Within a year, my debts were gone.

The manager of Master’s Market was Tom Taylor, a wonderful man. Tom was an ex-Marine and former farmer from Indiana. He had a wonderful heart and a soft-spoken manner, but he was also tough-minded, as befitted the military policeman he had been. The few times when I tried to call in sick, Tom would say, in his quiet, country-boy manner, “Well, we don’t have a backup.”

I would drag my protesting body to work in the winter cold, only to find my Guru subtly taking care of me, even showing me which healing herbs and juices to make in the market kitchen. After the first hour or so, I would invariably realize that I was feeling unaccountably cheerful. And I swear I got better a lot faster than if I had stayed home!

After working at the market for a year and a half, I was on my lunch break one day when the Village manager, Vidura, buttonholed me. He said, “We’re looking for someone to go down to Palo Alto and work in the legal office.” (Ananda was defending itself against SRF’s lawsuit at the time.)

He said, “Sheila (our lead attorney, now Nayaswami Naidhruva) prayed about it, and your name kept coming up. Would you be willing to move to Mountain View and help out?”

Vidura said, “All right, but we need someone soon…”

Before the words had left his mouth, I laughed and said, “Okay, I’ve thought about it – sure, I’ll go!”

I spent the next two years serving with Naidhruva and Keshava in the legal office. (Keshava managed the office.)

It was a wonderful experience. There was a tangible sense of Master’s presence beneath the surface of our lives as we fought to keep his teachings freely available to devotees everywhere. Lawsuits and lawyers don’t always spell a pleasant time, but there was a power that helped us stay strong and cheerful amid the challenges.

I no longer see service as conflicting with prayer and meditation. I find that service greatly improves my meditations, by opening my heart to God’s presence, as He serves through me.

After my work with the court case finished, I remained here in Palo Alto. My service now takes the form of singing with three Ananda groups, working occasionally in the community, and writing about Ananda.

People often come to Ananda hoping, as I did, to find God’s joy, love, and inner guidance. They meditate faithfully and try to bring God more into their lives. But at some point, many find their efforts bogging down. Their meditations don’t have the same inspiration as when they were just starting out on the path. And they aren’t feeling the joy that they suspect they should be.

In many, if not all cases, it’s simply because they haven’t learned to serve. That’s perhaps an unfortunate way of putting it, because “learning to serve” sounds a bit too much like unpleasant duty. But, in fact, God gives us opportunities to serve, not because he wants to place us firmly under his thumb and make us build His work, but because He wants us to be happy. And He knows that happiness can come to us most easily if we join Him and let Him serve others through us. It’s really as simple as that – if you want to thrive on the spiritual path, then learn to take delight in serving.

To understand this truth more deeply, it helps to spend time with devotees who’ve learned to enjoy service. To that end, I created a booklet called “Thy Light Within Us Shining.” It’s a collection of stories and interviews with devotees who are part of Ananda Sangha here in Palo Alto. If you’re looking to “catch the bug” of service and find God’s joy expressing more through you, I think you might enjoy it. 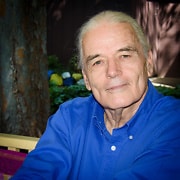