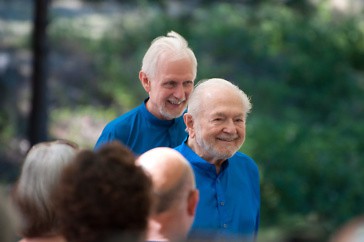 I never met Swami Kriyananda in person, but his words have been a guiding force in my life. Swami’s books and his guru Paramhansa Yogananda’s books are basically the only spiritual books I read. I do not feel an interest in other spiritual readings and also, my full-time job for a global company and my two children keep me quite busy.

Traveling to the Intercontinental Kriyaban* Retreat in Assisi, Italy in August 2017 from my home in Prague, I was looking forward to Kriya initiation, and to spending a sacred week with God and Yogananda, leaving all daily obligations behind me.

From the moment I arrived, it was wonderful. All of my issues and worries were gone. Though I knew they would jump on me again once I got home, I decided to enjoy the freedom while I had it. Going to Assisi was stepping into a higher level of consciousness, where the thoughts or unfinished tasks from my city life didn’t bother me at all. 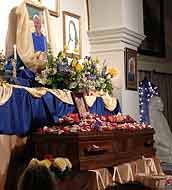 The guests could each sign up to meditate in the Moksha Kutir, where Swami Kriyananda left his body in 2013. I went there on the very first morning. His home is beautiful. As I looked around with interest while waiting outside, a wave of bliss touched my forehead. When I entered the room and sat for meditation, I felt as if an outward force was gluing me to the floor. And when the first note of the harmonium played, tears filled my eyes as I felt the presence of an enormous Love. I did not want to sob with the other people around, and I did not want this Love to go. And, amazingly, this Love remained.

After a time, two phrases from Swami´s song “Love Is a Magician” came clearly to my mind: “I listened and Love was there“ and “Only Love can heal all the pain I feel“ …then I understood.

My mind went back two or three months into the past. Before I mention the challenges I was facing then, I first have to say that I have a very, very good life, blessed in many ways. I am grateful for it and for the gift of Yogananda in my life. This is something words cannot truly express.

I have always had to use effort for things to work in my life. Usually I can face the difficult situations rationally and try to be solution-oriented, but sometimes there are periods of overpowering moods.

During the experience two or three months previously, I was at a point of great frustration at work and was considering leaving my company after almost 14 years there, but I didn’t have the courage to take that step.

I was also, as usual, angry and frustrated with my father, who is an alcoholic but won’t admit to being one. He refuses all treatment except his daily bottle of vodka and cigarettes saying, “This loneliness is unbearable. What other pleasure is in my life if I don’t drink?” Of course, he was also drinking when he wasn’t living alone. During one short visit—I cannot stand to be with him for more than half an hour—I uttered a prayer of exasperation: “Lord, this is so scary. This alcohol is a demon and it can catch anyone. Please do not let me ever, ever dive into such darkness.”

While dealing with these two challenges, one day I was watching my six-year-old son at the playground, when he fell from the jungle gym onto his back. My first words were: “Please, can you move your feet?” Thank God, he could move his feet. I was in such shock that I just held him in my arms for several minutes before calling the ambulance. He had a compressed fracture of three vertebrae. He and I spent one week in the hospital and another two weeks with him just lying in bed on his back. Thanks to God, the healing was smooth, and the spinal cord was not damaged.

The two other problems on my mind were nothing compared to this injury. I blamed myself and suffered about it, wishing I could turn back time to be able to stand next to him to catch his fall.

As I travel to work and back home or during lunch breaks, I sing to myself, usually whatever song or chant comes to my mind. During this difficult time, the only song that I could sing was “Love Is a Magician,” over and over. And I remember asking the question: Is it true that Only Love can heal all the pain I feel?

Now, here I am in Moksha Kutir, and Swami is responding to this question. I was shaken by such sensitive attention, totally unexpected. I was both deeply grateful for his answer and also moved to truly realize that I am not traveling through this lifetime alone.

The meditation ended. Two hours later I was on duty cleaning the Temple of Light and looking at the list of people signed up to meditate in Moksha Kutir. There were only 3 people on the list for that afternoon.

Inwardly I thought: “Swami, I would like to visit you again and again, but we were told to schedule only twice…”

I turned around and there stood Shivani, also looking at the sign-up list. I asked her if I could go more times if not many people were listed.

And so, I headed to Moksha Kutir that same day in the afternoon. 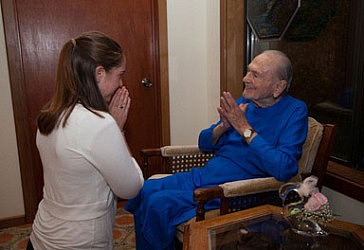 This time, the other people went into the bedroom for the meditation so I remained in the living room by myself. I could not feel the same Love again. I could not even meditate properly. “Never mind, I will just sit calmly and enjoy the silence.” After some time, the feeling of friendship appeared. It was as if Swami was sitting there in his arm chair, me sitting on the carpet, and we were enjoying the presence of each other, at a soul level, without a single word.

I visited Swami a few more times, whenever I was free from other responsibilities. Each meditation was exceptional. There was a tangible Grace poured on all of us. Who could ever resist Love, and Friendship? I wish for all of us that one day we will be able to attract God´s Love at will, and that we will be able to channel this Love to touch other people´s hearts. As Yogananda does, as Swami does.

Because Love is a magician.

*A person who practices Kriya Yoga

About the Author
Katerina Oslejskova