I never wanted to go to India. I had my heart set on a nice vacation to Hawaii, but I felt my Guru, Paramhansa Yogananda, guiding me to go on the Ananda pilgrimage in October 2006.

I was familiar with this type of guidance and it usually came before a big turning point in my life. I had moved to Ananda Village the year before based on the same kind of spiritual “nudge.” Could there be another turning point on the horizon so soon?

That thought made me a bit nervous. But the friends and ministers I spoke with assured me that going on the pilgrimage would be a life-changing experience. There was also the deep inner feeling urging me to go. So I shelved my inner reservations and signed up.

Adjusting to India was not easy. I had never been to a developing country, and the first few days after arriving were jarring, to say the least.

I felt this constant inner argument between my soul and my ego. My soul felt quite at home in the vibration of India: There was no need to explain why I was dressed in white, what a guru is, or why I was wearing Kriya beads around my neck.

At the same time, I wasn’t prepared for India’s extremes. In India, duality is ever-present: rich and poor; old and young; the healthy and the dying. Finding no respite from it, my western mind stared to rebel.

But I trusted my Guru. I also trusted our pilgrimage leaders who had led pilgrimages to India for 20 years. If anything were to happen, they would take care of us. This allowed me to relax and let down my guard.

Opening to the unknown

Our first satsang with Swami Kriyananda, shortly after our arrival, was especially helpful. He never spoke directly to me, but in his presence, I felt my heart opening to India. I began to feel that perhaps I did belong on this pilgrimage, and that as the disciple of a great Master, I too had something in common with the Indian people.

After that satsang, India became a much easier place to be. I stopped judging the way things were and began to surrender to “whatever was trying to happen.”

Within the first week, I learned a valuable lesson about consciousness. We were in the town of Rishikesh in the foothills of the Himalayas. Rishikesh is usually cooler than Delhi, but we arrived during a heat wave and after four days, I found myself getting cranky.

On a day when the temperature was over 100 degrees, we visited a swami who lived in a kutir (cottage) he had built on the banks of the Ganges. As he served us tea, I thought, “Why is he serving us hot tea? Doesn’t he know how hot it is?”

Before then I had no mosquito bites, but as soon as I had “attacking thoughts,” the mosquitoes attacked with a vengeance. I had at least 15 bites by the end of that day.

Lesson learned: when my energy was open and positive, things went very well. When I became negative or critical, I attracted more negativity.

Obviously Divine Mother is not more present in India than in America, but I was certainly more aware of Her presence there.

Nothing in India “works” consistently as it does in America.  The power supply is erratic; hot water is not a guarantee; and going to the bathroom is often an “adventure.” The simple things I took for granted at home—the things that foster my false sense of security—weren’t available.

I was forced to face the truth that I am never really in control of anything. The grace of that lesson was that I found myself clinging to Divine Mother much more.

I was also more aware of Divine Mother in India because the Indian culture is so infused with love of the Divine Mother, in Her myriad manifestations.

The Ganges is named after Ganga, Divine Mother, and the Indian people treat the Ganges as if it were Divine Mother, a real manifestation of Her. Perhaps that’s why the river is said to have spiritual power. It is a tradition to immerse one’s self three times at this sacred place.

At Devapriyag, where the Ganges River starts, the pilgrimage group had an opportunity to experience that power first hand. We went down to the riverbank and did a ceremony close to where people were immersing themselves.

After the ceremony, a few members of our group, following the example of the Indians, began to enter the river and immerse themselves three times. When they came out, each person looked very different—better.

Although the water was cold and I was apprehensive, I decided to immerse myself also. Offering up a prayer to the river, I went in. When I came out of the water, I too felt different, lighter. Only as the trip progressed would I realize what had been washed away that day.

An enduring vibration of love

As we visited the sacred sites in Rishikesh, Badrinath, Varanasi, and Kolkata, I began to realize that there was something common to most of these places. It wasn’t anything external. It was a feeling of love, deep love for God.

How incredible to experience first hand the truth that “love endures.” Some of these places were ancient, with buildings in disrepair, but the vibration of love for God remained.

The highlight of the pilgrimage

For me, and for many in our group, Yogananda’s home was the highlight of the pilgrimage. There I received a blessing that changed me to my core.

For many years I have struggled to believe that God really loved me, that I was a good enough disciple, and that I meditated deeply or long enough. Simply put, I was filled with self-doubt.

To make matters worse, I never had any “experiences” during meditation that gave me any sort of validation—no divine visions, no inner light, no uplifting surges of energy. I felt peaceful after meditation and could see that I was becoming a better person, but thoughts of self-doubt would negate these things.

When it came time to meditate in Yogananda’s attic meditation room, where he found God, we took turns going in, about five at a time. When my turn came, the five of us arranged ourselves in the small space. Somehow I ended up sitting right on Yogananda’s meditation mat!

As I started to pray and meditate, it began to feel as if I were sitting in a huge energy vortex, something not of this world. I felt riveted to the floor—I could not move. It felt as though my heart would burst from the torrent of love suddenly flowing through it.

Imagine my dismay when one of the pilgrimage leaders said, “OK, time to rotate and let the next group in.” Rotate? I can’t move! And, I don’t WANT to move!

But I did move and went downstairs to the room where Babaji came to Master and assured him that going to America was his divine destiny. The wonderful experience continued while I meditated in that room.

I was changed by that experience. It didn’t just calm those thoughts of self-doubt: it erased them. Swami Kriyananda has said that being in the vibration of a great saint can cauterize our negative traits. I believe this is what happened that day.

Having fun with Divine Mother

Once those self-doubts were gone, I knew Divine Mother loved me and I had daily experiences of Her loving concern and care. She seemed to be having fun with me, showing me just how real and available She really is.

She fulfilled even small spiritual desires like finding the translation of the Mahabharata I wanted, as well as big ones, like being blessed by Swami Kriyananda.

On the last day of the pilgrimage, we were hoping to have one last satsang with Swami but learned he wasn’t feeling well. We were scheduled to leave for the airport in a few hours. After packing, one of the pilgrims suggested that we send Swami healing prayers.

Right after we finished, the phone rang with the message that Swami was ready to see us! When we arrived, he was waiting for us in his front parlor. You would never know that he hadn’t been feeling well. He was radiating energy to all of us.

After answering questions and telling a few stories, he asked if we had any more questions. One of the pilgrims asked if he would give us a group blessing. My heart stopped.

Swami paused for a moment with his head bent down slightly, as if listening to Divine Mother whispering something in his ear. Then he looked up and said, “Yes, if you line up, I will bless each one of you individually.”

My eyes began to tear; I was filled with so much joy. I was grateful for this special blessing from Swami, and I knew it was also a gift from Divine Mother and Yogananda, through him.

The blessings I experienced in India were always available to me right here at home. But I think I needed to be completely out of my “element” to surrender deeply enough for healing to take place. My prayer is to always live in that state of surrender, no matter where I am.

Affiliated with Ananda since 2002, Frances now lives at Ananda Village and serves part time as manager of the Shrine of the Masters at the Crystal Hermitage. She also runs a private business offering healing consultations, workshops, and seminars.

About the Author
Frances Fayden 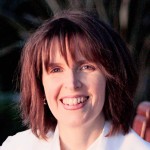