I arrived at Ananda Village on January 3rd, 2009. I was looking for my spiritual home on earth and had not found it in any of the ashrams that I’d attempted to live in before this. Within 2 weeks I was certain that this was what I was looking for. I spent the rest of January trying to tie up the loose ends of my former life in southern California and for the most part I was successful. My mother was moving to Florida, my sister was moving to another community she felt drawn to, most of my friends had moved on to the college life and career focus, and then that just left my father.

He had just been released from a 3 year prison term for various victimless crimes I will not go into here and in order to be allowed to live somewhere other than a ‘halfway house’ full of ex-convicts, he had to live with an adult who had a clean record and would keep up a correspondence with his parole officer about his reintegration process.

Having just discovered my purpose in serving Yogananda’s work as expressed through Ananda, I was certainly not about to volunteer for this job. But every time the subject came up for me in meditation or conversation I could somehow feel that it was necessary for both of us. On a practical note, I also needed to save money in order to take the prerequisite membership programs at Ananda. And after all, hadn’t my father sacrificed much of his own time and energy in order to live with and support me for many years of my life? Now he was in need of my assistance and it would be selfish of me to ignore this. 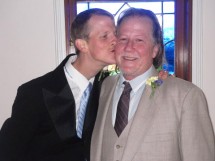 I therefore left Ananda reluctantly and relocated in Orange County with my father. I felt like a child might when the most precious Christmas gift ever conceived of had been given to him and then someone came along and ruthlessly tore it from his grasp. My plan was to return to Ananda as soon as this disagreeable duty was done.

I had found a job in a fine dining restaurant as a waiter and began to save up for my return to Ananda. I would spend my mornings meditating and reading Master’s books and in the evenings I would balance martinis and bacon-wrapped scallops on a serving tray for boisterous groups of wild men and women.

When I would arrive home in the late evening, my father would most of the time be found sweating in a half-conscious daze in front of the television. It didn’t take me long to notice that he had a drug problem. Due to occasionally intense pain from a life lived with little discrimination; he had acquired a prescription for some heavy medication, which would send him bouncing off the walls daily. I would be trying to meditate and I’d hear him rummaging through boxes of old things, blasting crazy music, vacuuming at top speed through the hallway, and all the while conversing loudly with himself about Lord only knows what! To say the least, I was annoyed!

At the end of every meditation I would practice Yogananda’s healing prayer technique and focus on my father being free from his addiction. I would concentrate with greatest effort for I was truly in need!

But it only got worse.

Then one day when I was reading on the patio, my father came out and asked me for 200 dollars. I naturally asked him what it was for. He refused to tell me. And so the answer was definitely no. He said that if I didn’t give it to him then he would throw all my stuff on the street while I was at work and lock the doors. We really got into a heated argument that ended in me locking myself in my room and calling the police.

I told them the story and they came over. I heard my dad yell my name in distress as soon as they showed up. After they had him handcuffed, they came to my room where I was holding my Kriya initiation rose petals and trying to become calm. The officer looked cautiously at the container in my hand which held the petals. I think he thought it was some kind of weapon or drugs. I smiled the best that I could and said, “good luck charm”.

He had me come out into the room where my father was detained and have a discussion with them present. Something happened when I looked into his sad and frightened eyes.

I realized that I was trying to force him to change.

And not for his sake at all… but for my own comfort.

All the many prayers I had focused so intensely on were not for him…they were for me. I had been praying with the intention of changing my circumstances and not for the good of others.

And so it goes without saying that these prayers were not effective. They were contractive and not expansive. They were “distorted by the cross-current of ego” as my guru has put it.

This is when it dawned on me that it’s not what we receive that connects us with God’s unlimited power…it’s what we give.

I felt such compassion in my heart for my father in this moment that I assured the police if they released him we could work it out peacefully. And I thanked them when they did.

Our relationship was shaken this day and it took a couple of months for us to feel comfortable sharing a house and our lives together again.

But in this time I prayed in a different way. Not so much concentrating on what I felt he needed to change, but instead just sending him love from my heart while asking God to bless him with whatever was needed for him to take his next step towards happiness.

As you may guess, the results were much different.

The first change I began to notice was not in my father…but in myself. In my interactions with him I could see and sometimes even feel Divine Mother reaching out from my heart and through my behavior to him in a way that was very healing for us both.

As soon as I sent my prayers with love, and not the ego based desire for a specific result, God had chosen to use me as His instrument for my father’s healing…as well as my own.

Did he quit using drugs?

But he did come to me some time after and said, “I want you to monitor my pain pills. I will give them to you and you only allow me to have one when I really need it.”

Well, this was an adventure in itself because I could see that sometimes he was really in need and others he was sort of faking it.

But it created an openness in our relationship about the drugs and the awareness of his addiction that enabled him in time to use it more responsibly without my intercession.

I returned to Ananda on September 12th of that same year and it has been my blessing to serve here since then.

Coincidentally it was this very week that my father was given freedom from parole.

Now, in retrospect I can certainly see that I was not taken away from Ananda just to do this service for my father. I too, had essential karma to work out before I was ready to live here.

When I returned to my spiritual home, it was with a newly matured approach to life and relationships that is much more harmonious with what is going on at Ananda than I had before this.

Isn’t it amazing how Divine Mother just knows what is best for us?