Swami Kriyananda’s words were fired with great gusto as he dashed into the living room of his home in Gurgaon, India, saying: “The main thing is that, with all of these (flower essences), we can use them to grow if we agree with them.”

Thus began his first and only class on flower essences.

“For instance, I held in my hand once a stone that Babaji had sent to Master by somebody. And it held a blessing. But it isn’t as if automatically anybody who holds that stone would receive a blessing. You have to be in tune with it.”

September of 2004 saw a small group of us seated before Swamiji in the stylish and welcoming parlor. The Indian-model air conditioner clanked and clonked as if gasping for the very air it sought to cool, making the follow-up transcription of his talk on my cassette recorder a nearly impossible challenge.

The best healing methods, as Paramhansa Yogananda states in his book Scientific Healing Affirmations, are those that support the life force, the true healer of our ills. Flower essences do exactly that. The blossoms of a plant or tree contain 90 percent of its life force, botanically speaking. Flower essences, extracted from their blossoms, work to subtly influence, awaken, or stimulate our higher nature.

Birth of a New Line of Flower Essences 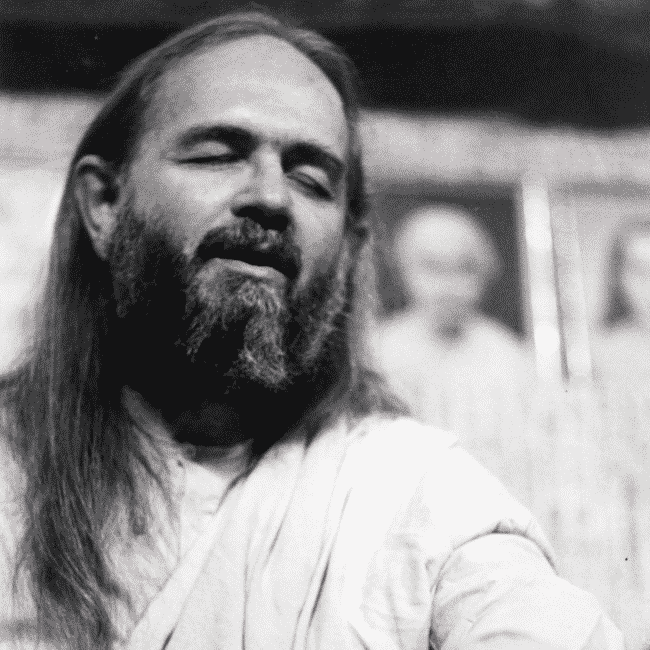 Back in the late 70s, Swami was fascinated by forward-moving Dwapara Yuga health trends. Flower essences had caught his attention. With avid interest, he studied the Bach Flower Remedies, developed by Dr. Edward Bach outside London in the 1930s. Often he would recommend specific flower essences for Ananda Village residents, and I would supply my friends with the corresponding bottles.

Then came that moment after Swami’s morning class at the Meditation Retreat. I turned to him in the lunch line of the Common Dome (our former dining hall), as he said to me:

“You know, I had this idea.” In that moment, the blueprint for Spirit-in-Nature Essences descended from the ether. Swamiji elaborated: “Why not create a new line of flower essences based on Master’s list of the psycho-spiritual qualities of certain foods?”

Included were apples for clarity, figs for flexibility and self-acceptance, and bananas for humility rooted in calmness.

“Swami, I had the same idea!” I blurted out, abandoning my usual shyness around him. “But I’m nervous about creating a new series of flower essences. It’s not been done before!”

In the decades to follow, I would share many testimonials with him about the 20 Spirit-in-Nature Essences. He was especially fond of those about people’s pets. Lacking the prefrontal lobes of the brain, animals are not subject to the wily imaginations of the placebo effect, which adds notable credibility to their flower essence responses. (This subject is covered at greater length in my book, Flower Essences for Animals.)

In fact, Swamiji would share with others the story of a herd of a hundred calves at roundup time—which meant dehorning, castration, branding, and being separated for the first time from their mothers. Within one hour of drinking from their watering trough infused with Pear Essence, they settled down peacefully without the customary climate of trauma-based pandemonium. The ranch hands, witnessing the transformation, were utterly astonished.

Spirit-in-Nature Essences can be called metaphysical herbs. As combination formulas are so popular these days, I developed the 7 Chakra Blend Flower Essences, each addressing the core strengths and challenges of the different chakras. 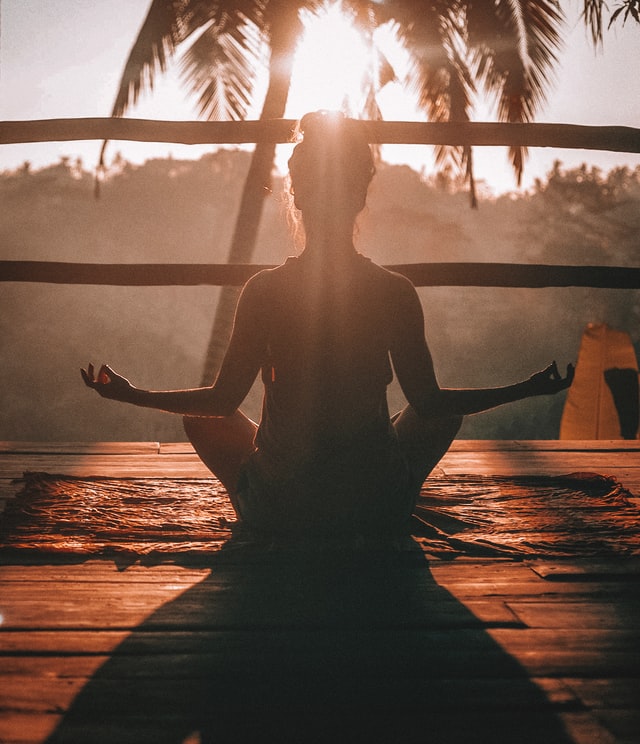 As Swami clarified, “No physical substance is going to affect you spiritually.” Yet taking Spirit-in-Nature Essences is much like “having satsang” with the most pure, potent elements of the Divine Mother in Her garb as Mother Nature.

“More Boxes? No Thank You!”

This title of one of Swami Kriyananda’s songs addresses a contractive attitude and one that he shunned. “Most of us live in boxes of our own making,” he wrote. “Shall we dare to come out and see what reality really is?”

The title also paraphrases a common term used in the flower essence world: the type remedy. This construct narrowly defines an individual according to predominantly negative personality traits. At the previously mentioned class in Swamiji’s living room, I described to him a system I’d created to explain human nature in ways that can help to free and not bind us. The concept of a signature essence, formerly called the theme essence, was designed to replace the concept of negatively typing people—to inspire them to see the best in themselves and to seek their own perfect well-being. A Raspberry signature individual, for example, embodies the qualities of kindness and compassion.

“Well, Lila Devi, I like that. I think that’s good. It doesn’t box people. It gives them an opportunity to grow with that.

“I’ve always hated a system that types people,” Swami continued emphatically, with his Orange Essence signature zeal. “Tara, who was strongly into typing people said, ‘You’re the lone wolf type.’ (Note: Tara Mata was the acting vice president of Self-Realization Fellowship on the board of directors with Swami.) I thought that was the most ridiculous thing I’d ever heard! She liked to type people. And so she didn’t look at the person, she looked at the type. And when they were a type, they had to be this way, and everything she saw about them had to be crammed into that little box. I don’t like that.”

“Signature essences,” I volunteered, “are designed to help people connect with the uplifting qualities of their soul nature.”

I elaborated further for our small class. “At a UK seminar some years ago, one of my students was moved to tears when I suggested his signature flower essence might be the Orange. (Here Swami chuckled.) Reggie had been born with a hand deformity. In elementary school, it had caused him to be the butt of many unkind jokes by his classmates. Years later without any warning, his wife of 24 years left him for another man. Yet even throughout his deepest trials, Reggie maintained an innate sense of enthusiasm, the hallmark of this flower essence. He taught himself to paint intricate landscapes on small stones with the aid of magnifying glasses and became a brilliant energy worker using both hands, thus overcoming his handicap.” 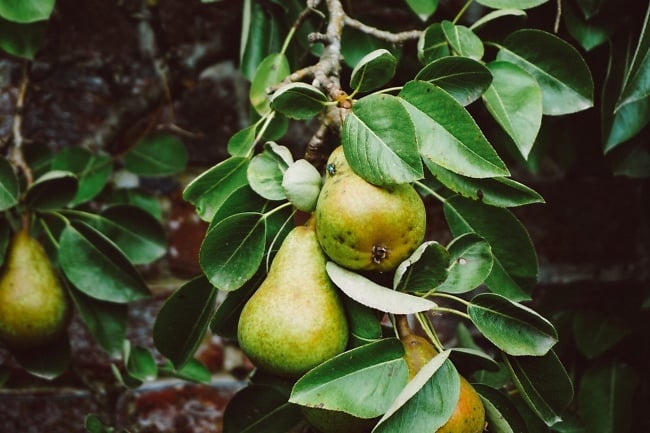 “We all could use a good spray of Pear these days, as far as I’m concerned,” cited one fan of this flower essence. The peaceful effects of Pear are also recommended for emergencies. Moreover, as the first flower essence I prepared, my connection with it carries special memories – my purse and every room in my home are graced with a bottle.

“On Pear Essence,” one woman wrote, “I was able to set aside concerns about my finances and not knowing how I was to be compensated for extra work because of COVID. Through it all, I felt everything would work itself out.”

Have you ever stood in a pear orchard? I highly recommend it! Inner peace abounds in the trees’ white five-petaled blossoms that grow in abundant clusters of five to seven. Their pacifying message addresses a basic challenge of humanity: resistance.

The pear fruit’s fibers are pacifying to the digestive system. Even the wood of the pear tree expresses its tolerant nature. Without breaking or splintering, this hardwood can be carved into many varied designs. The wood’s resilience, seen in its absence of brittle resistance, suggests the still depths of perfect peace.

The opposite of peace, as we well know, is war. How many times each day do we resist our tests, creating a warlike attitude of subtle crosscurrents replete with tension? In these pandemic times, the world seems to be cycling through a mixture of hardship, horrors, and uncertainty.

Accept, adjust, and adapt: these verbs describe the Pear Flower Essence that harbors a portable bomb shelter of tranquility. Pear helps transport us, to quote one of Swamiji’s songs, “above the storms, above the pain, a land where peace and laughter reign.”

As written in The Essential Flower Essence Handbook: “Mother Nature’s pharmacy has long been accessible to those who have pried open her botanical medicine chest. And to those who wish to learn her language—the language of flowers—she bestows her most wonderful secrets of perfect well-being.”

A New Name for Our Vibrational Vitamins 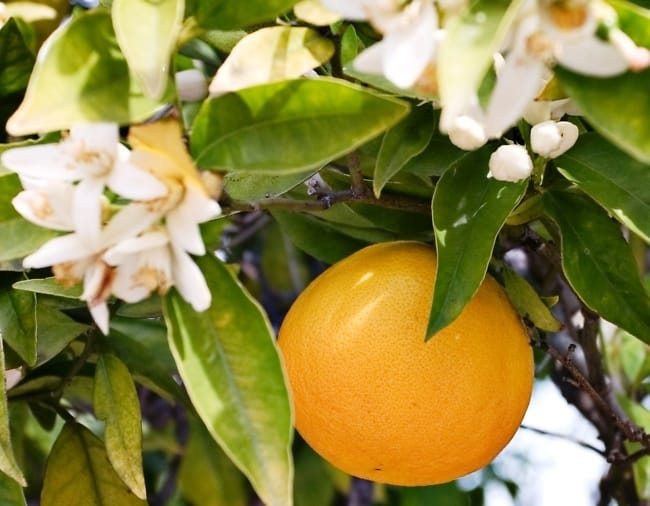 Back in the early days of Ananda Village, many of our business titles were prefaced with “Master’s.” Some friends may remember our former name of Master’s Flower Essences.

In 2004, Swamiji suggested replacing it with Spirit-in-Nature Essences. Nearly a full year passed before I was able to tune in to its poetry. Before long, I’d fallen in love with it. After all, how many brand identities actually explain how their products work? It also references our inner journey to find the divine spirit within our own nature. The name suggests the spirit, or life force, within Mother Nature as well as the dance between Spirit and Nature. As a beloved Indian chant lyricizes:

Spirit and Nature, dancing together,
Victory to Spirit and victory to Nature!

Thus Paramhansa Yogananda’s insights into the “vibrational vitamins” contained within certain foods and their corresponding flowers became the platform for Spirit-in-Nature Essences.

“All You Need Is Love” 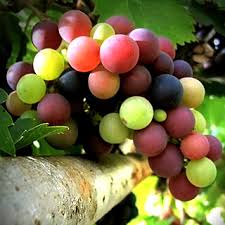 Swamiji loved, used, and highly recommended these flower essences. He delighted in hearing about their latest developments. Of the testimonials I received from him – sometimes handed to me directly or verbalized in person – perhaps the Grape Essence for divine love was his favorite, as seen in the Grape-like devotion and poetry of his words:

“Hard work was dimming my devotion. Grape Essence helped bring the energy back to my heart. It reminded me of the words of the poet-saint Omar Khayyam, from his Rubaiyat: ‘He bid me taste of it; and t’was the Grape!’”

“To live a complete life,” he wrote of this flower essence, “our hearts must be softened. (Just see how dry life is, when we lack love!) Don’t wait for others to love you: Love them first, yourself. Love them spontaneously! Grape Essence will help you to learn selfless love. Best of all, it will help you to develop love for God and for all true and noble principles.”

Love also abounds in nature. Through the language of the flowers, it delivers to us a bouquet of divinity.

About the Author
Lila Devi 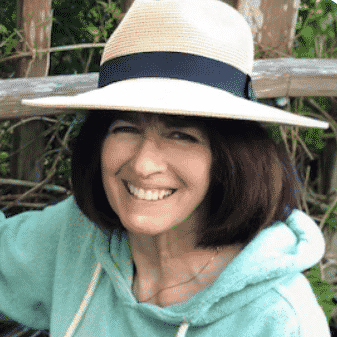 Lila Devi is the acting founder of Spirit-in-Nature Essences, established in 1977, the oldest flower essence line globally outside the UK. Lila has lectured nationally and abroad and currently teaches on Zoom. Her 4 books include: The Essential Flower Essence Handbook (in 5 languages and used by Doctors Across Borders to train their physicians, now celebrating its 25-year anniversary as Crystal Clarity’s first audiobook soon on Amazon Audible); Flower Essences for Animals; Bradley Banana and the Jolly Good Pirate, the first of 20 children’s picture books, each personifying a flower essence; and a spiritual memoir entitled From Bagels to Curry. Lila graduated with honors from the University of Michigan with a Bachelor of Arts degree in English and Psychology and a secondary teaching certificate. She is considered to be one of the foremost flower essence developers in the world today. Also an Ananda minister, she has lived in several Ananda communities (including Ananda Assisi) for 45 years and currently resides at Ananda Village. www.Spirit-in-Nature.com and www.LilaDeviAuthor.com