During his lifetime, Paramhansa Yogananda exhorted his students to create spiritual communities,

places that would support their spiritual lives. As he put it, “Environment is stronger than will power.”

I moved to Ananda Village 3 years ago, and rarely leave it. I run errands in town on occasion, and visit family or go on pilgrimage a couple of times a year.

When I do travel, and see places like those I used to live in, I sometimes make new discoveries. On a recent trip away from Ananda, a few things struck me.

Looking for joy in all the wrong places

First, I was amazed at how crazy most people seemed. They seemed to seek happiness mostly in ways that can’t bring them anything more than fleeting happiness – they seem to seek it in things, in other words: money, property, relationships, and so on. This is pretty crazy! Things are unreliable. They are in constant flux; they are no one’s friend.

That I found such a way of life perfectly normal several years ago underscores the truth in Yogananda’s statement, quoted above.

Dog grooming is not one of my usual interests, but something I discovered on that recent trip was how to have fascinating and even inspiring discussions with others, on diverse topics. The secret was to approach the subject from their point of view.

In fact, my cousin recently started a dog grooming business. Canine-hair care was an unknown art to me, but after making some effort to find what my cousin liked about it, it became interesting. In fact, it has a lot of spiritual lessons!

She told me, for instance, that if certain ferocious dogs sense fear in a groomer, they’ll take advantage of him or her and refuse to cooperate. So my cousin simply makes up her mind not to be afraid! With this act of will, she’s able to handle the trouble-makers even when others aren’t. Her technique is reminiscent of Sri Yukteswar’s sage words: “Look fear in the face and it will cease to trouble you.”

After talking for a while, we concluded that we are each doing that which is helping us to grow. Several years ago, I wouldn’t have been so open to her reality, or enjoyed it so much!

This openness is something I’ve experienced from others at Ananda, thanks to Swami Kriyananda’s leadership and example. 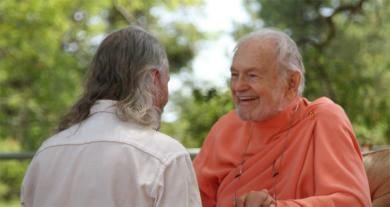 Swami Kriyananda enjoying a conversation with a member of Ananda

I lived in a suburb near Seattle for most of my life. Day in and day out, I’d see lots of people that I didn’t know and never would.

Today, though, most of the people I see are friends, Ananda members that I know: 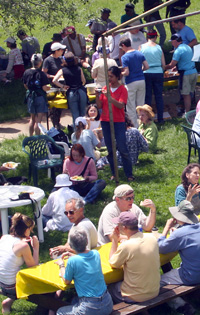 people who I live with, sing with in the choir, or serve with in Ananda’s outreach ministry. Some of my closest friends are also my co-workers.

Swami Kriyananda has made “People are more important than things” one of the key principles that guide Ananda. When I first encountered it in action, it took me off guard. Two Ananda Seattle members were helping me to find a job. I had only recently met either one and felt that I was being a burden. Seeing this, one of them said to me, “This is just what we do for each other.”

I’m deeply grateful to have lived in a place that strengthens the feeling that “all the world is my friend.” It may have had a hand in the following story.

I’ve been using a specific practice on recent trips. It is, while around strangers, to single someone out, and find the place inside myself where I would truly give time, attention, and even my life, to him or her – in the same way that I would give to a brother or a life-long friend. (It’s easy, because I’m very unlikely to have to actually do anything!)

It is rewarding and freeing in its own right – I’ve felt a sincere love for others that I hadn’t experienced before – but I wasn’t expecting any outward results. Things have happened, though, which make me think that this technique has an effect on others, too.

When I practice it on trips, people I don’t know act kinder towards me – even on days when I’ve forgotten about this altogether. We all want friendship and respect, and respond positively towards people who offer it to us.

One day, at a website-related conference, I was attending a meal with hundreds of people I didn’t know. I tried to practice this technique, but was also quite timid, and didn’t introduce myself to anyone! After that, I prayed to Divine Mother to be guided to the right people. Paramhansa Yogananda has taught that we attract friends by giving friendship.

The next time I sat down, it was next to someone who meditated every day. He also lived 5 minutes from the headquarters of Self-Realization Fellowship, which was founded by Yogananda. After we discovered our shared interests, we had a wonderful conversation about meditation and other spiritual topics. 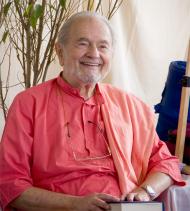 He writes in Revelations of Christ:

“God is in every person you meet. It would be a good practice, while walking down any city street, to look at every passerby and think of him or her as God in that form. Then tell yourself, ‘He (or she), too, wants what I want: happiness.’

“He/she may visualize that fulfillment as a new job, or a raise in salary, or a wife or a husband, or children, or as any of the innumerable things people yearn for everywhere on earth, in the expectation that they’ll find happiness through them. Look at them more deeply, however, and remind yourself, ‘What their souls really want is divine bliss, which is only masquerading as human happiness. In that yearning, they are all my brothers and sisters, even if in their present intentions they are misguided.’

“Talk to God about them in your heart. Ask Him to bless them. In time, with this practice, you will come to think of all life as a great, glorious symphony, blending all creatures together in wonderful, flowing chords, rhythms, and melodies of divine aspiration.”

(This is continued on page 436 of Revelations of Christ.)

I’ve also seen how much we all need divine teachings, and, most importantly, need to see them in practice.

In this way, trips away from spiritual community are a blessing, and even a necessity, an opportunity to share the treasures of the spiritual path. Jesus said, “To whom much is given, much is expected.”

A favorite past-time of mine in crowds (one mentioned above by Swami Kriyananda) is to pray for God to bless everyone around. I recommend it also for use in any environment with a negative magnetism – it helps protect you from that negativity, and can become a real joy in itself.

Though it didn’t happen in a crowd, there’s a small example from my own life of the effect that God’s blessings can have, through this technique.

I follow some blogs related to my work with websites. One day, one of the blog writers apologized for something and said that his week had been going very badly. I wrote and told him how his blog had helped The Expanding Light (Ananda’s meditation and yoga retreat), and tried to pray for him as described above.

My email was very short, but he wrote back and said it had “made his day.” And I felt a blessing come back to me in return.

This is all to say: wherever we live, if we experience peace or any divine quality, we can share it. It’s not necessary to be overt: a calm gaze, a kind word, or your loving presence itself can be an inspiration. 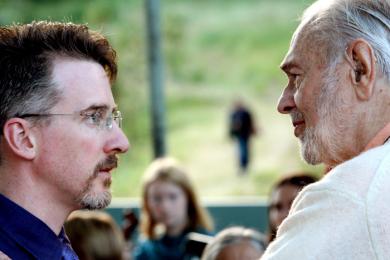