From the Kay Erdwinn’s Post Teaching Yoga for Round Bodies

Except for position 3, Padahastasana, there are no positions in this sequence that are much harder for the fat beginner than for the thinner one, in and of themselves.

However, the transition between postures may be very difficult for fat people. For example, lowering the hands to the ground between Banarasana and Plank Pose may be hard to do because of the belly. Almost inevitably the front knee will drop to the side to accommodate the abdomen, and the person’s balance will be thrown off, especially since s/he must move the now out-of-alignment leg back for the next asana.

Likewise, moving from Adho Mukha Shvanasana back into Banarasana is also difficult since it requires the student to lift and bring the leg forward between the hands, again running into the belly. Most fat students will lift their leg out to the side, then forward, placing the foot beside the hands rather than between them. Both alignment and balance suffer with this move. The same problem occurs in the movement from Banarasana back into Padahastasana.

I don’t know a way for a fat person not to run into this difficulty if s/he does the transitions the traditional way. Here’s what I do personally:

To move from Banarasana to Plank Pose, I first lessen the intensity of the lunge by pressing down with my front foot and moving my torso back (making sure to remain upright, not to bend forward). Then I bring my front leg back to match the back one, so that I am kneeling. Next I place my hands on the ground, much as in “Mad Cat / Old Cow” (on all-fours), as far forward as I can, then lift my body into Plank Pose. The hardest part of this is getting my front leg back to match the back one. The transition is easier if the knee drops to the side, but it is at least possible to do the move without doing that. Thus my body stays in alignment, I keep my balance, and my transition is reasonably smooth.

For moving from Adho Mukha Shvanasana to Banarasana, I leave Downward Facing Dog by re-entering an all-fours position, then I straighten up my torso by pushing my hands into the floor. From here, I step one leg forward (the very large person may have to lean back or move the leg outward slightly, and I honestly don’t know a way around that), then move into Banarasana.

Lastly, for the transition from Banarasana to Padahastasana, I again move my torso back, place my hands on my front thigh, and step the back leg forward as I’m pushing myself up with my hands, and enter the forward fold (as much as the old tum-tum will allow) smoothly, without ever having stood up completely. I’m not sure I like this last maneuver, especially it puts pressure on the front knee when I push myself up. It may be safer for someone with knee problems not to attempt this.

Actually, I’m a bit uneasy about all my adaptations in this sequence. Unlike my reaction to adapting a single asana, I feel a bit like I’m cheating, since the transitions are such a large part of the Surya Namaskar. However, it is the only way I’ve found that allows me to stay in alignment, keep my balance, and maintain the necessary flow of movement. I’d be curious to learn what other fat yogi/yoginis have come up with for this sequence. But so far, these adaptations work for me. I have not yet tried them in class, because the Sun Salutation is a bit advanced for my crowd. 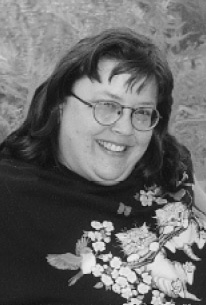