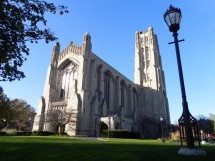 On the weekend of November 5 – 7, 2010, Nayaswami Anaashini Alzate and I traveled from Ananda Village to Chicago to participate in a weekend of programs at the beautiful Rockefeller Chapel at the University of Chicago.

This unusual invitation came about through friends of mine, Elizabeth Davenport and Anne Benvenuti. Anne and Elizabeth are both Episcopal priests. Elizabeth is also the Dean of the Rockefeller Chapel and therefore responsible for all programs which happen there.

I have known Anne since 2000 when Anne graduated from Ananda’s Meditation Teacher Training Program. When Anne and Elizabeth received an announcement that I had become a Nayaswami last December, they felt drawn to have me visit them in Chicago to take part of a Diwali/East Indian/Hindu weekend. Perhaps they felt that this “exotic ‘bluebird’ of the Nayaswami Order” might be just the right (and unique) touch they needed for a weekend like this one.

Diwali is the biggest celebration of the year for many Hindus. It is called a “Festival of Lights” and it happens at just about this time every year, with many elaborate ceremonies, fireworks, lights, and so on — sort of like our Christmas and New Year’s all put together.

Elizabeth, having taken on the position of Dean of this facility about two years ago, is doing her best to have a very “inter-faith feeling” there, with many events from different cultures/religions happening year-round.

In the Chapel (the word “chapel” is misleading; it’s really a huge cathedral) they have rooms set aside for Islam worship, Hindu worship, yoga practices, Zen meditations, and so on. It looks like a medieval church in every respect. It was built in the 1920’s with funding by John D. Rockefeller. Modeled after the great cathedrals of Europe, it seats 1700, has an incredible pipe organ, giant church bells on which they play music, and acoustics that make any choir or musical presentation sound amazing. If you ever get to Chicago, you should make it a point to visit there. See the Chapel website for more information.

Friday night was the Diwali Celebration with traditional Hindu puja ceremonies and East Indian music. There was a large representation of the Chicago Hindu community in attendance. It was presented by the Hindu Student’s Association of the University of Chicago, and it was great fun to be there. 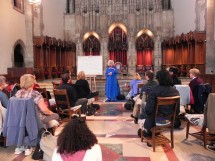 The next day, I presented a 6-hour seminar for about 20 folks on “How to Meditate and How to Share Meditation Skills with Others.” There were a number of University of Chicago seminary students in attendance, some folks who had been for a visit Ananda in the past, and others who were simply interested in the subject. It was a very inspiring program, with a truly delicious, catered Indian lunch happening half-way through it.

When the seminar was over at 3pm, Rev. Elizabeth spirited me quickly away (I had fun changing into Indian clothes while riding in the car) to the very posh Drake Hotel in downtown Chicago where Rev. Anne was the presiding minister at a 4pm Christian/Hindu wedding ceremony. We made it on time, and I provided the chanting. It was a very elaborate wedding which went on for many hours. The bride was from the Mid-West, the groom was of Indian heritage, and the huge audience was 50/50, as was the ceremony. Quite a scene and a bit hard to describe, but it all seemed to work out well. 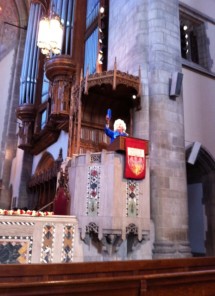 Just before Sunday Service the next day, Annashini and I participated in a 45-minute Q and A forum for professors and graduate students on the Autobiography of a Yogi. They had very interesting questions to ask about the nature of cosmic consciousness!

The Sunday Service was held in the above-mentioned Chapel. We helped to lead it along with various priests, Indian dancers, and musicians. In my brief sermon during the service, I added a small portion of the Ananda “Festival of Light,” (see photo) which was well-received by all.

East met West in a very nice way in Chicago that weekend; as it happened, it was on the very same weekend that President Obama, whose Chicago home is just blocks away from the Rockefeller Chapel, was speaking to the Indian Parliament in New Delhi. Paramhansa Yogananda’s predictions about the unification of India and America seemed to be coming true in both large and small ways. Jai Guru!