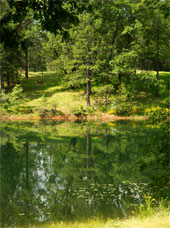 A dream I once had changed the way I look at Ananda. In it, a friend was telling me that Ananda is like a lake of consciousness, filled with joy and reflective of all the colors of the rainbow.

I only very rarely share spiritual dreams, but this one illustrates so well that Ananda is not only an organization, or group of communities. It is also something much greater and more enduring.

I think people feel this when they come to Ananda Village, or to other Ananda communities – if not always consciously, then at some deeper level they sense the “Ananda behind Ananda.” This is an energy that can be tapped into wherever you are, for Ananda (literally “Divine Bliss”) is not bound by distance or divided by borders.

Each year Ananda (the organization) holds an all-day Christmas meditation the week before Christmas, a tradition started by Paramhansa Yogananda in the early 1900s. The first year I was with Ananda (in Seattle), I wanted to go, but was stopped by back problems that forced me to change positions often and meditate lying down – far from an optimal way to meditate, and not really compatible with group meditation.

So I held a long meditation on my own that same day, and discovered a joy that I had never felt before. 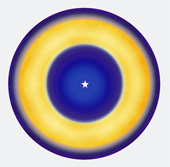 I mentioned this to Terry McGilloway, one of the center leaders in Seattle, and he said, “Oh, you felt it too?”

I know that my experience would likely have been deeper in a group. However, it has helped me realize that Ananda (Divine Bliss) is not a thing which is here and not there. Yogananda described it as “center everywhere, circumference nowhere.” It is most clearly felt, I think, in the heart of one who loves God, no matter where they are.

May you, dear friend in God, be much blessed.