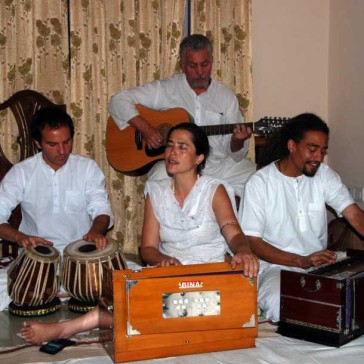 Chanting has the power to bring all who practice it with deep attention a feeling of divine response. Singing, Yogananda said, is a divine art; and devotional chanting is the highest form of this art because it leads to attunement with the Cosmic vibration. In devotional chanting you learn to attune the “receiving station” of your heart to pick up the channel of communion with God through sound.

Devotional chanting can take your negative energy and turn it right around into positive energy — toward, rather than away from God. Many years ago, I decided that Ananda was the place of all places where I truly wanted to live, but personal circumstances forced me to return to my home in Texas for a long time.

My attempts at meditation weren’t going very well either. But I learned that by chanting I could change my black moods into joy and put myself into a space where I really wanted to upgrade my meditations. I didn’t have a harmonium, but I did have a cassette player and a few tapes of music from Ananda.

I would put on these tapes and listen and, eventually, sing along as I learned the words and the melodies. I learned that they had the power to pull my heart out of sadness and loneliness and into a place of real joy.

I chanted with Swami Kriyananda, the founder of Ananda; I chanted with my Ananda brothers and sisters — I was transported through the power of this devotional music to the blessedness of Ananda and the joy it represented to me.

Chanting can help you to overcome temptations and attachments and help you to realize Gods presence within even under the worst of circumstances. Swami tells of going to the nightclub district in San Francisco on a Saturday night to meet someone in the music business. It was not a place for a devotee to be on a Saturday night! So Swami began to chant very softly or mentally: “Sri Ram, jai Ram, jai, jai Ram Om.” Instead of feeling dragged down by the low and worldly vibrations all around, he felt totally uplifted and joyful.

The power of chanting can help you remove obstacles and overcome fear. Fear, particularly, fear of failure is the “Great Paralyzer,” often causing us to freeze into immobility or sin into pits of inertia. One time I had to drive 150 miles alone at night in a broken down car with no money. The car was acting weird and it was dark and I was scared. So I started chanting. I tell you, I chanted as well as I’ve ever chanted in my life, for I was motivated! I made it to Austin and back safely, and then the car broke down. To this day, I truly believe that God and I “chanted” me and my car all the way down that lonely Texas highway to my destination.

Chanting Can Heal You

Master tells in Cosmic Chants how thousands chanted, “O God Beautiful” in Carnegie Hall in 1926 “in a divine atmosphere of joyous praise… The next day many men and women testified to the God-perception and the healing of body, mind, and soul that had taken place during the sacred chanting…”

Chanting Can Give You Devotion

Often we feel, “I want to love God more, but how do I do it?” Sri Yukteswar says in The Holy Science that we can’t put one foot in front of the other on the spiritual path without “the natural love of the heart.” If you remember nothing else about chanting, remember this because it will help you tremendously in your efforts to cultivate devotion.

Always remember why you are chanting and whom it is that you are chanting to. Don’t sing to the person sitting nearby, or to the trees, the sky, or the walls. Don’t even sing to yourself. Sing to God. Sing to the God within you. That’s Who you’re singing to, with a prayer in song, with the power of increasingly focused, one-pointed devotion.