A sacrificial rite or performance of duty. It should be offered with devotion, without any desire for personal gain, and with firm belief in its rightness. (1)

Traditional yagas in Vedic culture were offerings of food, money, or cows for milk. They also were performed according to instructions written in Vedic scriptures. They were accompanied by other rituals such as prayers, chanting mantras, and fire for purification. (1) 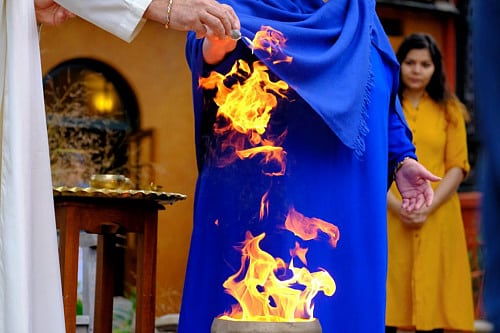 Yagyas were sometimes performed to attain rewards, material or spiritual, but the higher sacrifices were intended as devotional offerings or to purify the soul of desires and attachment to the body. Swami Kriyananda has said that Kriya Yoga is a true yagya. Yagya can also be seen as a continuous self-offering, offering the little self into the higher self. (2)

Ananda ministers occasionally perform a yagya at special occasions, such as weddings, and before Sunday service. They light a small fire and offer ghee and rice into the fire to represent burning up the seeds of desires and karma, freeing us to reunite with the Divine.