Being located in a rural area with lots of brush and trees, Ananda Village has always been in risk of being affected by wildfires. Add to this the hot and dry summers, it is almost impossible to have a year without any fire incident.

Year 1976 (way before my time here) marked the worst fire in Ananda’s history, which burned all but a few structures. In August 2004, I experienced my first close encounter with a wildfire. A fire that started on Tyler Foote Road right below the Expanding Light Retreat, burned a few acres as it traveled up the hills, and eventually destroyed one of the cabins.

After that fire, our awareness and preparedness for fire incidents have increased immensely, year after year, fire season after fire season. Every year we try to fine-tune our preparedness and bring it up a notch higher to be ready for the inevitable.

Yesterday we had another small incident. Due to a possible electrical problem, a car caught fire on the side of Tyler Foote Road right below Ananda Village land. As it burned to ashes, it started a fire that took the brush and trees around it. It was around 4:15pm when I started hearing the fire attack planes circling above Ananda.

I was just about to listen to the Nevada County scanner available on the web, when I heard my phone ring, and saw it display Emergency on its screen. I immediately listened to my messages, and heard Peter Goering (our Village manager) reporting the fire and asking our first responders to stand-by with their clothing and firefighting gear.

I then called 511, which is our conference number for these emergency situations. In a few short moments I heard the announcement that asked our first responders to go to Meru road in one of our housing clusters. I put on my firefighting clothing, grabbed my backpack pump and camelbak, and rushed to the location. 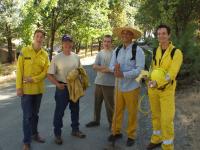 Other first responders had started gathering on Meru Road waiting for further instructions. Soon after we arrived, Thom, one of the Village employees, heard through his scanner that the Fire Department were already calling off the air attack. We didn’t need to fight any spot fires.

Everyone felt a relief. It was also reassuring to see so many people be able to report to the scene so quickly.

Over the last few years, we had many improvements to our fire preparedness, including:

1. More land is being cleared and mowed each year, especially around houses to give the firefighters better chance to protect the structures.

2. We have teams made up of community members responsible for three main areas:

a. Fire Chiefs – people who can run the command center (located at village office), direct other fire chiefs and first responders to the scene, liaise between our first response team and between the Fire Department in charge.
b. First Responders – people who have the proper clothing and gear to fight small fires, mainly spot fires.
c. Evacuation Team – people who are trained in evacuation, and who would go to each cluster to ensure everyone is informed and/or evacuated as the situation arises.

3. Every season we meet with the firefighters from the local volunteer fire department (North San Juan – NSJFD) and from the Columbia Hill CAL FIRE station to get trained and better informed.

4. Three of our residents are volunteer firefighters with the NSJFD.

5. We purchased scanners and 2-way radios for better communication.

7. All first responders carry their fire clothing and gear in their cars during fire season.

8. We have improved our communication system using many of the features of our local PBX (phone switch). We have the ability to alert the fire chiefs and first responders in an efficient manner. We also have voice conferencing capability to be able to interact with each other at the onset of these emergency situations.

9. We perform regular reviews of our response system, fire drills and ongoing training.

This evening we had another training session with firefighters from CAL FIRE, Columbia Hill Station. We had many questions answered and they also tought us how to cut a fire line, how to sharpen tools and how to use fire hoses with our fire hydrants. As usual they emphasized our safety as the main concern and encouraged us to stay within our limits. 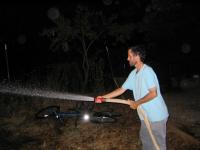 As you see, we are doing our part as best as we can to protect this blessed land, its residents and its structures. The rest is up to the grace of God and our Gurus.