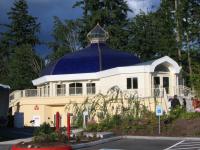 June 23rd 2007 marked the day for the dedication of the beautiful Ananda Seattle Meditation Temple. The Ananda community of Seattle joyfully and skillfully organized the entire weekend with keen attention to detail. All events for the weekend were sold out. People who weren’t able to get in the temple had to use the auxiliary rooms and the outside tent to watch the live video feeds. 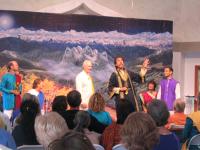 The weekend festivities started on Friday evening with the performance of the play “Jewel in the Lotus” written by Swami Kriyananda. Actors from Ananda Village gave one of their best performances, which brought first laughters and then tears with its clever humor and divine inspiration. 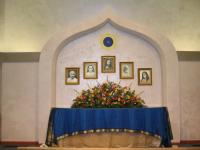 At 11am on Saturday, the time for the dedication ceremony, the temple was filled to overflowing with members of Ananda Sangha from all around the world as well as the Ananda Seattle congregation and special guests including our own Swami Kriyananda for the dedication event.

The special guests included B.S. Prakash, Consul General of India from San Francisco, and Rosemary McAuliffe, Washington State Senator from the First District. Mr. Prakash spoke beautifully for the dire need of such temples in bringing the East and West together and in uniting people from all religious and spiritual backgrounds in peace and harmony.

Hriman and Padma, the spiritual directors of Ananda Seattle, introduced and acknowledged the main contributors involved in the building of the temple.

Swami Kriyananda as the keynote speaker gave one of his most uplifting and inspiring speeches ever. He seemed to be doing great physically, which he attributed to the recent chiropractic treatments he has received. He was able to give his speech while standing with great energy and enthusiasm. Here are some excerpts from his speech:

In referring to the solar energy project for India, he said:

“So here we are a spiritual community, yes, but we are not just spiritually oriented in the sense that the world is there and we are here … We want to be a part of the human race, we are not trying to separate ourselves. In the Indian teachings there is this thought of trying to find Kevalya Moksha, final liberation, but while you are in this mess you might as well make a decent thing out of it.”

On the essence of God:

“This is the teaching of Sanaatan Dharma, that the essence of God is not some big policeman up there watching and waiting for you to make a mistake so he can hurl you into hell. The nature of God is Satchidananda, ever-existing, ever-conscious, ever-new bliss.” 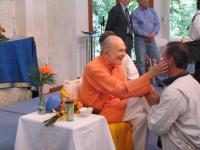 After the ceremony, Swamiji stayed and personally greeted all the guests, many of whom were in tears of joy. 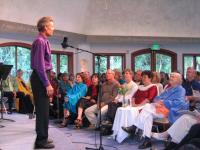 In the evening, the choir and musicians presented a concert of Swami Kriyananda’s music, entitled “Windows on the World”. I felt honored to be able to perform with the other Ananda choir members from all around the world. As always, it was a privilege to ride the wave of inspiration that flows with Swamiji’s music.

Swamiji also gave the Sunday Service to a once again overfilled temple of devotees and guests on this week’s topic of “The Eternal Now”.

Don’t miss the streaming audio/video and a slideshow of this inspiring weekend.