On August 9 2008, the day before the Spiritual Renewal Week, eighteen great souls gathered at Ananda Village to honor Ananda’s 40th anniversary and Swami Kriyananda’s 60th anniversary of discipleship by doing a bicycle ride. They had options of starting or ending the ride at different points along the planned route, thanks to the great sag wagon support by my wife Suzanne and JT’s wife Gitabai. Our combined mileage was 723 bicycling miles over about 8 hours. 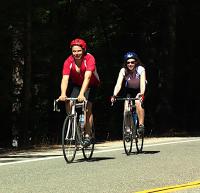 The day started with a light breakfast at our house and a prayer for joy and protection. We loaded some of the bikes on the sag wagons (or upliftment wagons as my wife would like to call them) for their riders to start at a later point and the rest of us got on the road at 8am to meet with them around 9:30 at their starting point. The 66-mile route started at Ananda Village, followed Tyler Foote Road down to Oak Tree Road to North San Juan. A right turn on Route 49 took us to Oregon Creek with a 2.5 mile descent. This was followed by a beautiful, relatively easy 10 mile climb. Before this climb was over, the sag wagons dropped off a group of riders before the top of the hill and we all descended for 4 miles into the North Yuba River valley. The 12 miles in this valley heading to Downieville is one of my favorite stretches of road for bicycling. Downieville was the mid-point for our ride so we stopped there for pizza and rest. We returned to the village following the same route back.

All throughout the day we were blessed with great weather and wonderful satsang. Suzanne and Gitabai drove the sag wagons along the entire route to provide ongoing support for all the riders, while Kent rode his scooter as club’s official photographer and videographer. 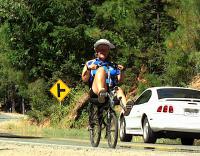 Based on the amount of joy that was generated, we hope to repeat this fun-raising(!) event annually. We hope you can join us for next year’s ride. In the mean time, if you know you’ll be in the area and would like to join us for a ride, just drop me an email.