On June 2nd, JT, Bob and I did our first century together in Calaveras County, organized by the Sacramento Wheelmen Bicycle Club. I had talked about this upcoming ride in my previous post, titled “Satsang On Bicycles”. 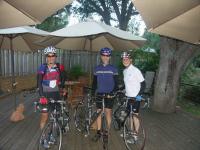 Three of us have been preparing and training for this event for the several months preceding it. We were lucky to have trained in the hills around Ananda Village, because this ride was considered to be one of the harder centuries, with close to 11,000 ft of climbing. We were happy to see that the training had paid off as from start to finish we all felt that we were ready for this ride. We not only finished it but we also finished it with energy left. The total time it took us was a little longer than what we had planned, thanks to many relaxing rest stops and several flat tires (mine!), but the ride time was nothing to be ashamed of. 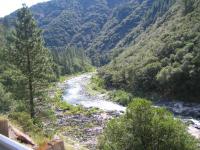 Though the scenery along this ride was quite beautiful, we realized how much better roads and scenery we get by riding around our area, right off of our doorstep. We rode together to Downieville (and beyond) several times, and it’s nothing short of world-class views and roads. Last weekend, we also enjoyed bicycling the entire loop around Lake Tahoe, which is about an hour and a half driving distance from Ananda Village. 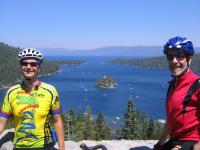 Over the weekend of the Sierra Century we talked about how wonderful would be to invite others to share the joy of bicycling on the hills around Ananda. We could make a weekend event out of it, starting with an orientation on a Friday evening, then meditating together on Saturday morning and then going on a bike ride together, however long it might be, and then coming back to the village and sharing a meal together. Perhaps to top it off we can end the weekend with another leisurely ride on Sunday after Sunday Service. We talked about putting together a website of maps and different routes one can take all starting from Ananda Village for all levels of cyclists. This project is now in progress. 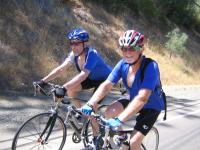 If you are interested in participating in a “Bicycling Around Ananda” weekend, drop me a note. I look forward to hearing from you.