“If young people, before getting entangled in worldly life, experience the bliss of meditation, they are little likely to fall victims in later life to the ubiquitous sense delusions.”—Paramhansa Yogananda

When I was a young girl my father used to caution me about the importance of working hard, and never giving up. He used his own life as an example, showing his children qualities of dignity, perseverance, and love through the way he interacted with the world.

When he died, he unwittingly continued this process. I remember my initial shock when I first saw him on his deathbed. His room was filled with such sacred, luminous energy that my husband and I went into a deep meditation. The stroke had rendered him speechless, and with his personality gone and the ego in final retreat, his eyes gazed upon me for the first time ever with the pure, unflinching sweetness of the soul.

Had it not been for my training in meditation, I would never have been able to appreciate those moments.

A few years ago, I embarked on a journey to teach my nine-year old son, Rama, how to meditate. Swami Kriyananda had once spoken to me of the importance of teaching our son to meditate. Yogananda himself talks about meditating as a child in the Autobiography of a Yogi: “Many a morning and evening found Mother and me meditating before an improvised shrine….”

At the time, my son was a missile of scattered energy—one might say he lived his life somewhat like a human fly, chasing each new energy that presented itself, with little awareness of his effect on others. Had he been enrolled in public school, I was sure they would have labeled him, and possibly prescribed medication to tame his ways.

Parents are often the child’s first guru (teacher) so the examples we set can have lasting effects. Even before Rama was born, my husband and I consciously made an effort to meditate together each day as a way of keeping our souls attuned. We have been married 12 years, and meditating together is one way we keep our marriage strong.

If, as parents, we hadn’t been meditating or didn’t make it a priority, it would have sent an instant message to Rama. It was also very helpful for my son to learn that one of his friends whom he looked up to had started meditating.

I knew that it would be best for Rama if he could learn to meditate without my having to force it on him like a bitter pill. Surely, I had only to plunk my son down next to me while meditating and through osmosis, he would naturally learn the art and science of meditation.

No such luck. I would sit and meditate, while he always found excuses to leave the meditation area. After wrestling with the thought of how I was going to teach our son how to meditate, I decided it might be easier to catch a wild kangaroo! I prayed to Divine Mother for guidance.

I noticed how my son was very diligent about brushing and flossing his teeth when I reminded him. With a little coaching from mom, he had learned to take his own bath in the evening. To encourage his reading I sometimes offered little rewards when he finished a long book. Surely, he had established some good habits. Could some of these techniques be applied to learning meditation?

I waited for the right time to talk gently with my son about how meditation might help him concentrate and heal his heart. When my son was a year old he had open-heart surgery to repair two heart defects.  Each year the cardiologists continue to monitor his heart for the possibility of another surgery.

Rama was receptive to my desire to help him, but he balked at the idea of sitting to meditate. “I can’t do it!” he’d say.

In the beginning, when his resistance was strongest, I would sit with him in his room and review the “hong-sau” meditation technique, a simple breathing technique. I would do the breathing with him, talking him through the technique. If he didn’t want me to talk, we’d just sit together in the asana of meditation. Sometimes we would pray or chant together. My calmness and sensitivity to his energy seemed to help him.

We continued this routine for three or four months for about five minutes each day. It required as much patience and hard work from me as it did for him. Yes, he was resistant. But he was also resistant to brushing his teeth, washing his hair and feeding his pets when he first started. I was determined to help him, and he could feel my own commitment.

I offered him a few rewards along the way. I told him I’d take him snowboarding for two days if after six months he could meditate by himself and make it a daily habit. As he grew calmer from the meditation, his resistance lessened.

After six months, I bought him an egg timer that looks like a little rooster.    As I’d always wake him up for school, I’d bring the little egg timer into his room, tell him it was time to meditate, set the timer for 10 minutes, and walk away.

Occasionally, I’d sneak a look into his room to see if he was really meditating. For a few months, I’d catch him playing with a toy or otherwise engaging himself. As soon as I’d remind him about meditating though, he’d quickly close his eyes and (God only knows) return to his meditation. At night I’d play him the “Land of Mystery” visualization from Swami Kriyananda’s Meditation for Starters, which he learned to love.

There was a point during this process when doubts assailed me. Was I succumbing to time worn “parental authority” techniques? Wasn’t it just better to let him decide on his own when, and if, he wanted to meditate?

But these were only passing fears. Having investigated the wide body of child psychology that exists nowadays, I knew that most of this knowledge, while instructive in some ways, does not give any relevance to God, faith, prayer, and meditation. In my own life, it has been only through meditation, prayer and faith in God that I’ve been able to overcome seemingly insurmountable problems.

It’s been nearly two years since my son has been practicing meditation. Meditation for him is now a daily habit, just like brushing his teeth. And he’s like a different person. He’s much calmer and less frantic. He’s able to concentrate on his homework, which has improved his schooling. And he’s much more aware of other children’s realities, which has helped his friendships.

The beauty of meditation is that it’s a scientific technique that helps people live healthier lives. For children, it not only helps them become calmer and more peaceful, it lays the foundation for introspection and inner growth—something they can take with them on their own journey through life.

Creating a Supportive Environment for Meditation

Recently in my art class I had a 17-year-old high school student whose father had been meditating with him from the time he was quite young. I could sense in this student a sensitivity far beyond his years. This student became a positive model for the other boys in our high school because of his own love of meditation, and the kindness and support he showered on everyone. Today he is excelling in his college studies and has truly kept his high ideals.

I reflected on how meditation, if taught at a young age, could help teens and pre-teens handle stress in constructive ways, resist negative peer influences, and experience more fulfillment in their lives.

For our children to embrace meditation, we need to create a supportive “environment.” It’s important that they’re not over-stimulated by things like videos, television, and negative music. Days packed with activities can ruin a child’s emotional psyche. Make time to read books together, to do chores together—to do the simpler things that allow us to slow down and just enjoy each other’s company.

Sara Cryer, an Ananda Lightbearer, teaches art at Living Wisdom High School at Ananda Village where she lives with her family.
About the Author
Nischala Cryer 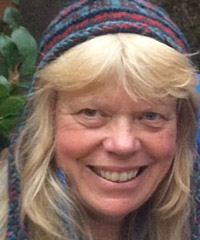