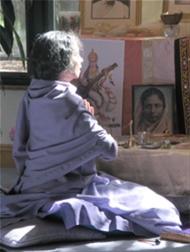 “Divine Mother,” she said, “is the easiest way to God. As any child knows, you can make demands of the Mother than you can’t make of the Father. It is the same with Divine Mother. So, this way of worshipping God has become very popular in India.”

The concept of Divine Mother is one of the most important things that Paramhansa Yogananda and other yogis have brought to the West. It is a beautiful way of relating to God.

The whole weekend, much more than anything she said, was characterized by a beautiful energy. It was very sweet as well as intense.

For example, when I opened one of her books for the first time, I almost started crying. I couldn’t even manage to read the foreword. Strong energy, even strong devotion from a Divine source, is not always easy to handle.

Someone once told me, speaking specifically about Swami Kriyananda, how powerful spiritual energy can be challenging: Divine light exposes your faults as well as your strengths, and living around a very spiritual person is like living around a Divine light. It “increases the voltage.” Not everyone can take what they see, but those who can take it are the ones that grow.

Accepting ugliness as a necessary part of Divine Mother’s creation was a major theme of Vanamali Devi’s Saturday morning talk.

“The beautiful and disgusting parts of life,” she said, “are two sides of one coin. You cannot have one without the other. The person who always lives in daylight can’t know what night is. Think of it! Divine Mother gives us the horrid things so that we can enjoy her beauty. Without those, we couldn’t enjoy it.” 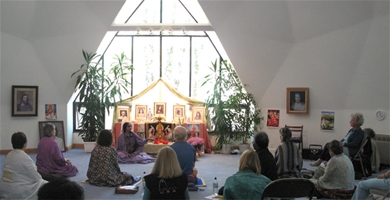 Many paths to one goal

For years I’d been avoiding the teachings of spiritual teachers outside our path (Yogananda’s path) because I didn’t want to get sidetracked or confused.

This is not unwarranted: I think it is a great precaution to take, especially in the first years of one’s discipleship, when one’s footing is less sure. That focus must be there, for one who has chosen a guru.

The effects of reading teachings of many paths can be mental indigestion and confusion; at its worst, it can pull a devotee off their path to God, as once happened (it seems) to a friend of mine.

I want to say all this because it’s important–and of course also because this is a blog dedicated to Paramhansa Yogananda and here I am writing about Vanamali Devi! Yet it seemed right that I should share her visit, which I feel has blessed Ananda.

During the weekend, I kept wanting to think of her as “Miss Vanamali,” out of respect. (The normal way to show respect in India is to add a “-ji” at the end of someone’s name.) It was a surprisingly strong thought! But when someone expresses Divine qualities in a strong way, well, what can you do but feel devotion and respect? The way that she unifies wisdom and devotion may be one of the most valuable things that she has to offer the West.

Just to give one more example: I learned today that Vanamaliji was in pain the entire weekend, owing to back trouble. Yet she didn’t complain – certainly I didn’t hear her mention it.

On the contrary, she was joyful, sharing her love and energy for the length of the retreat. As Mangala, a staff member, commented, she was a model for Divine Mother: giving to God’s children without thought of herself.