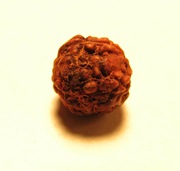 A single bead for a single kriya.

Kriya Yoga is a scientific meditation technique which Paramhansa Yogananda said was the most effective route to God.

He also said that completing one round of practice, which takes less than 30 seconds, is equivalent to one year of natural spiritual progress.

However, Yogananda once told an advanced disciple, “You only have to do one kriya now.” So Kriya Yoga is not just about quantity, but depth – a meditation which focuses on the breath is the same way. Quantity is a good place to start, though!

Kriyas are often counted on a mala, or string of beads. The meditator uses the mala to keep track of how many he has done, up to a count of 108.

I’ve thought for a while that a one-bead mala, for doing just one kriya per meditation, would be a fun idea, mostly as a joke.

A friend of mine, a long-time disciple who I respect deeply, had his birthday a recently. So I gave him a one-bead mala as a present, partly in humor, and partly as a symbol.

He unwrapped it and laughed. A friend nearby asked him what it was. I was surprised by the depth and sincerity of his answer. He replied, “A reminder that every kriya can take us to God if we do it deeply enough.”

In a way, this is true of everything that we do. The more devotion we bring to any activity, the closer it will bring us to God.