3 of us monks founded Ananda’s new monastery in America in August of 2005, but we didn’t have any buildings to go with it. For the first year, we were loosely distributed around the Ananda Meditation Retreat. 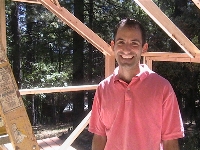 Eventually it became clear that we needed buildings of our own. I was asked to move from my own tent when we had large crowds, and Narayan (a monk slightly older than myself), though he avoided this difficulty, was able to do so only because his own home was incredibly small – so small, no one else would have wanted to stay in it!

Sometime around the spring of 2006, Nitai, probably the wisest among us, set the ball rolling, and we began planning the building process. We built the monastery in the summer of 2006. 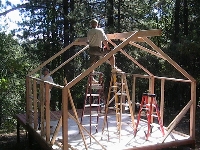 Wyatt (left) and Nitai during construction

Nitai had some building experience, but I think this was the first time on a construction crew for Narayan and myself. I don’t know if this is most people’s experience with Ananda, but I’ve often been asked to do something that I had no training, knowledge, or experience in. It keeps things interesting, and invites one to seek new ways to do things. It can also, I think, encourage one to be more reliant on God.

Wyatt, the foreman, was essential: so much so that, by the time we were nearly finished, Nitai was calling us the “Kripa Construction Company.” (Kripa means “Divine Grace.”)

Because we built during the summer, Nitai, a high school teacher at Ananda Village, didn’t have to work and was able to commit the most time to the project. Narayan and I joined on the mornings we could take off from our jobs in the Village.

My initial hopes for wheels (a portable bungalow!) and a sunroof had to be scratched in favor of reality.

What Are Those Things?

Swami Kriyananda recommends for monks to live in separate buildings, and for women monastics to live together. These bungalows were the cheapest (less than $3,000 each), most reliable structures we knew of that could retain heat during winter and provide a comfortable lifestyle. 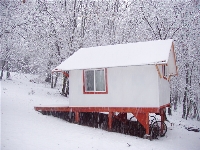 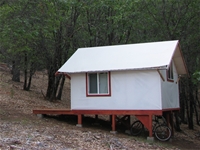 They were also easy to build.

We have electricity. We have propane heat. The walls are insulated, and the floors are wood. A nylon tarp stretches over the roof, and at 12′ x 12′, the bungalows are spacious: plenty of room for any monk I know.

Without all that, the bungalows are essentially canvas tents on stilts. So it is, how shall I say, somewhat drafty. Yet, I find winters in them to be enjoyable. The bungalow is small, so it starts off cold and heats up quickly, and stays at a comfortable temperature without trouble.

What Is It Like to Live in a Monastery?

I think it is a help, if it is right for you. Really, all members of Ananda are monastics: we practice inner renunciation to the extent we are able. Above all this means renouncing the ego, and offering all that we are to Divine Mother, to God.

In this spirit it seems helpful to be a monk (a formal renunciate) if it focuses one’s life on this kind of self-offering, which is the only truly important kind of renunciation. 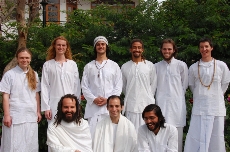 Narayan and I with the monks in India

Our monastery is not a traditional one, as you’ve probably realized! We live at the Ananda Meditation Retreat with a small band of high school students, “yoga university” students, retreat staff members, and others, and work at Ananda Village during the week. We don’t have a lifestyle of seclusion or separation from society at large. In fact, I didn’t notice a big difference in the outward way I lived when I became a monk.

I was still meditating, and serving, and living in spiritual community, like before. None of that has changed. But: my spiritual life has deepened. And it has deepened more, the more committed I have become to this lifestyle. I can only say that this means to me that I am meant to be a monk.

I’ve seen the same thing happen in others who have become formal renunciates since I’ve known them – this includes many of Ananda’s monks in India, as well as Narayan and myself in America. There’s a level of peace that we didn’t have before. Monks tend toward silence and seclusion, and this is a big help in developing inner communion.

But is it necessary to be a monk or a nun? Ananda, with its mostly-householder communities, shows clearly that it is not! What is most wonderful in any life is love for God, and no rule or outward path can circumscribe this simple fact.

(Left to right) Myself, Narayan, and Nitai in front of the monastery