In the spring of 2007 a dear friend suggested that we build a new entry sign at Ananda Village to welcome people to the community. To help it happen, she volunteered money for the project. This started discussions in our monthly planning meetings about building an informational sign that was also “nice-to-look-at.”

So began the long saga of drawing up sketches: should it be one sign or more? Should it be a more than a mere sign? A monument, perhaps? What about building materials: stucco? Wood? A combination? What should the sign say? “Ananda,” and perhaps a subtitle: “A World Brotherhood Colony,” or “Joy Is Within You” (the name of Ananda’s logo). Should it have directions to Master’s Market, just to the right at Ananda’s famous “downwtown”; and Crystal Hermitage, on the other side of the hill?

Over the next number of months, it seemed to our village members like there was a lot of talking, pointing, and head-scratching at the building site, but little action. For the group of us involved in the actual creation of the sign, it had become clear that nothing truly inspired us, so nothing happened for awhile.

Then, after seeing some preliminary sketches, Jyotish Novak suggested that the greeting one receives upon entering Ananda Village should be artistic and inspirational, rather than just practical.

Thus began some fun out-of-the-box thinking. Lotus columns and kundalini (Sanskrit for inner energy) pillars came and went. Finally Jyotish suggested an infinity pool (a pool with the water is filled to the brim and perfectly calm ) with the Joy Is Within You Symbol (Ananda’s logo), seeming to emerge from the still water. This inspired some real enthusiasm.

Devi Novak came to one of the meetings and suggested waterfalls on the back rim. I (being a pool and landscape contractor) drew up a few sketches and then we began the mock-up phase.

Now our village members saw ACTION at the site, but their questions remained: what the heck are you guys doing? A masonite (a brand of hardboard) board was bent to show the shape of the pond perimeter. On the front was spray-painted Ananda Village in a nice bright orange. To top it all off there was the Joy Symbol constructed of glued-together PVC pipe with a Salvador-Dali-type “bend” to it.

Later on a member of the team made a plywood to-scale Joy Symbol, which was painted gold and put up in our “masonite” pool.

At this point, we agreed that the proportions were just about right. Our sign had turned into something much greater than was originally visualized, and our benefactor tripled the money pledge. I took on the pool aspect of the project. Others began the process of creating the real Joy Symbol. They spent weeks making it out of wood, which was later cast into a polymer resin. When they were finished, it was transported by truck to a business in the nearby Nevada City to be cast.

I began forming the pool basin with the drain, filter system and footings for the Joy Symbol. I also found some fantastic greenish boulders to edge the pool. Power and water were brought to the site.

Swami Kriyananda was scheduled to arrive from India soon for a busy summer at the Village, so we filled up the pool and installed the gold-painted wood mockup.

Later in the summer the newly-cast Joy Symbol was carefully brought back to the Village, sanded and triple-pained with coats of gold epoxy car paint by the members of the building team.

All the pieces came together during the week we celebrated Ananda’s 40th Anniversary, and Swami’s 60th year of discipleship. The Village was overflowing with guests from all over the world. A beautiful sign greeted everyone on their arrival. Many have expressed their appreciation of the labor of love that went into creating it. Guests and residents alike still remark how much the new Joy Is Within You entry sign truly expresses Ananda’s spirit.

About the Author
Tim Tschantz 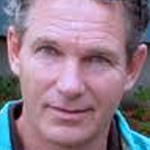