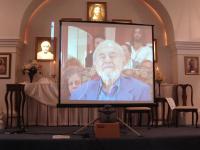 Watching Swami in Italy watch us

Early Dwapara Yuga sees many technological and social advancements. For instance, we have long offered the time shifting capabilities of viewing recorded videos of Sunday Services or recent talks by Swami Kriyanananda on our website. We videotape these events, work our computer magic to put them into a form that is suitable for internet viewing and put them on our website where you can view them on demand any time from anywhere which has served tens of thousands of devotees over the years. These audio and video recordings are also offered by some of the colonies including India and Italy.

Now we have begun to remove the geographic barriers to being with Swami and each other with real time live conferences and broadcasts. As with all processes at Ananda, this is growing organically, one step at a time.

Earlier in the spring, the decision was made to acquire and install a new technology which enables Swami Kriyananda to communicate over the internet to a larger audience. Called video conferencing, it enables 2 way live simultaneous audio and video communication between parties. What’s the big deal? Telephones have been around for ages and now, with internet, there is skype, etc. What is new for us is the ability to send and receive a clear, LARGE, and live conference.

We started out with 2 way conference between Swami who is currently at his home in Assisi, Italy and our community residents at Ananda Village who gathered for these satsangs at Hansa Mandir (where we hold Sunday service) after morning meditation. Swami could hear and see us on his large screen TV in his home and we could see him on a big screen set up with projector and hear him via a large speaker. LIVE, I mean live. no delays. Just like talking on a telephone except the image of Swami projected on a big screen in front of Hansa altar. Residents were deeply touched by the sense of true satsang with Swami despite the 9,000 mile distance. 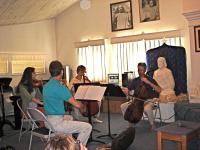 We then, at a subsequent satsang, tested our ability to broadcast this conference to one viewer which turned out to be Ananda Seattle. They watched and heard whatever we saw and heard. Thanks to high speed broadband connection, they had a very satisfying experience.

Last week, for the birthday celebration we sent the live stream to a server in Canada for rebroadcast and it was then viewed simultaneously at community gatherings India, Seattle, Portland, Palo Alto and Los Angeles. Ananda Italy moved their side of broadcast to their beautiful mandir and we saw 50 residents from the Assisi community present. The World Brotherhood choir at Ananda Village sang several songs and a quartet of musicians played several instrumental pieces.

What is next is future more widespread live broadcasts of some of the summer events here at Ananda Village and maybe even some 2 way live satsangs with Swami Kriyananda from wherever he resides. We are removing the the geographic barrier in his ability to have satsang with other devotees around the world. Truly a major shift for the future. Stay tuned for more on the ananda.org website.

About the Author
Kent Williams

PhotoKent is a long time resident at Ananda Village and amateur photographer and videographer who flies quadcopters to make videos.
Read more