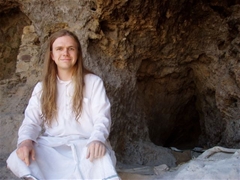 This photograph was taken at a cave where Swami Kriyananda once spent a month in seclusion. “Next door” (next cave) is Vasishta Guha, spiritually deep and powerful, and flowing past it is the Ganges.

Vasishta Guha has a great story behind it. For countless years, it’s said, holy people have stayed in the cave, meditating there and making it holy. It was made well known by Swami Purushottamananda, who lived there for 30 years in the mid-1900s.

As it is now, the cave is not very deep; perhaps forty or fifty feet. At that point it is walled off. I’ve read, though, that it extends a full twelve-and-a-half miles (twenty kilometers) past this point!

As the story goes, Swami Purushottamananda walled off the vast majority of the cave to stop people from disturbing the siddhas (realized or perfected souls) who were, and perhaps still are, sitting back there in their astral (energy-based) bodies, meditating.

Is this true? I certainly can’t say for sure. However: this cave is the one place I would make sure to go if I ever returned to Rishikesh. It was intense.

It’s interesting: these places would be impossible to enjoy in a really meaningful way without a spiritual practice. Can you imagine going to see holy places just to look at them? “Oh look. A cave. It’s dark.”

But when you can feel the vibrations, a cave can become a fountain of peace. In fact, the memories that live most strongly with me from this trip are of meditations, most especially that one at Vasishta Guha.

I mentioned earlier that I spent less than usual time meditating on this trip. That was definitely a loss! 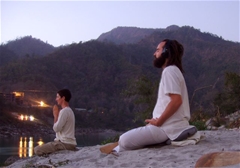 But: it clarified for me the difference that long-enough meditations make: they are essential. Since my return to America, I’ve made the commitment to add a half-hour onto my daily meditation practice.

Consider that when we meditate we are bathing in a river of inner light. Whether we actually see light or not, it helps very much to remain in the uplifted state of meditation – what Lahiri Mahasaya called the calm “after-effect poise” – for as long as possible. Otherwise the “dirt” of our lower nature may only loosen instead of being washed away; when we get up, it will dry and be stuck to us as ever before.

Best, though, is to enjoy meditation. It’s possible to overdo it, and I don’t suppose that dry meditations, of any length, clean our consciousness as well as those where we experience joy or devotion.