Recently I’ve been struck yet again by how effective Kriya Yoga is for causing deep changes in people’s lives and consciousness.

Not long ago, I was checking someone’s Kriya practice. This person received Kriya about a year ago. At the time they received the initiation, I wasn’t quite sure that they were ready to practice the technique. They didn’t seem to have the necessary focus. Kriya requires a serious commitment in order to be most effective.

Imagine my surprise when I saw them completely changed, after only one year of Kriya practice! They had bright eyes, clear mind, and a deep sense of joy. I saw increased energy, and a growing desire to serve others. Their meditations had improved to the point where divine inner communion has become a powerful daily reality. 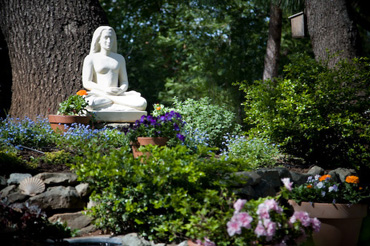 I have seen similar results in others, time and again, so I shouldn’t be surprised any longer. When Paramhansa Yogananda called Kriya Yoga an “Ancient Science,” he was addressing one important aspect of Kriya. A true science is proved by experiment. Moreover, it has to be proved not only by one person, but by anyone, anywhere, who performs the same experiment.

The Kriya “experiment,” done correctly, produces remarkable results in all who practice it. Results aren’t always instantly noticed, but are inevitable for those who follow the Kriya path sincerely and with deep devotion.

One time I was talking with Peggy Deitz, a late, long-time disciple of Yogananda. She wrote the beautiful book Thank You, Master, describing her time with Yogananda. She remarked that the Path of Kriya is somewhat like planting a fruit tree.

She pointed out that if one follows the right gardening practices by fertilizing, watering, and protecting the young tree, it will inevitably bear fruit. It won’t always be quick, but when the time is right, the tree will produce the long-awaited fruit.

The Path of Kriya Yoga is the same. It is truly a science, and when practiced the right way, it will, without exception, bear the fruit the yogi is seeking – divine joy, a lightness of being, clarity of mind, boundless energy, and direct experience of God. I’ve seen this ‘experiment’ proven time and time again.

As Yogananda said, “Kriya plus devotion works like mathematics. It cannot fail!”