On May 29th, a prayer vigil began at Ananda Village, inspired by the two that were recently

The reason behind these has been Swami Kriyananda’s health, which is affected by traveling – and he’s been doing a fair amount of traveling, to give talks and spend time with devotees in Italy and, very soon, in America.

Nothing is life-threatening, but he has to go through a lot of tapasya, or sacrifice, simply to make any public appearance.

The vigil will last nearly 100 hours in all, continuing until June 2nd, when 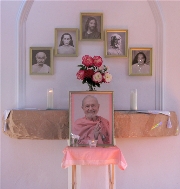 Swamiji is scheduled to arrive in America. During this time, Ananda Village residents are taking one-hour shifts, praying for his health and sending him love.*

I participated in the vigil yesterday for an hour and a half, with more time scheduled tomorrow. It was a joy. Like a flame, which, kept burning, can heat up an entire building, a vigil draws to the object of its prayers an intense spiritual fire. We’re doing this to help bring God’s light to Swami Kriyananda, but I feel it is also blessing us, deeply.

It is an honor to pray for someone so selfless. He is always giving, simply by his presence and friendship – and his gift to all of us, right now, is the opportunity to pray for him.

The vigil is held at the Crystal Hermitage, left, near Swami Kriyananda’s house at Ananda Village.

* We use the healing prayer techniques taught by Yogananda.