The Three Qualities of the Universe 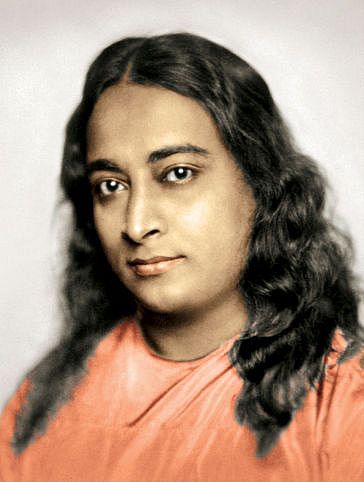 The ancient yoga teachings stated that the food a person eats affects his state of consciousness. Paramhansa Yogananda (author of the world-renowned Autobiography of a Yogi), in his wide range of teachings, explained that specific spiritual influences are inherent in certain foods. Such influences include cereal for strength of character; beets for martial vigor; maple syrup for mental freshness.

According to ancient yoga tradition, the universe expresses three fundamental qualities or gunas, depending on the degree of clarity with which they express the original, Pure Consciousness out of which all things were manifested. In Sanskrit those qualities were named tamo guna (the which is dulling to the consciousness), rajo guna (which activates the mind), and sattwa guna (which clarifies and uplifts the understanding).

How Does This Apply to Our Food?

Certain foods were described as being tamasic because the effect they have on our awareness is stultifying. Others were considered rajasic because they tend to make one restless and overactive. For mental and spiritual happiness, the foods most highly recommended were sattwic, because they exert a calming and uplifting influence on one’s consciousness. 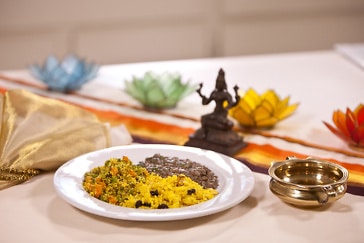 For a well-balanced and happy life, foods with a tamasic influence should either be kept to a minimum or eliminated altogether. One should moderate his intake of rajasic foods. Foods that help to induce calmness and mental upliftment should preponderate in the diet of people seeking inner peace. Modern life, however, is essentially restless and ego-centered. For people who must cope with worldly attitudes around them, or who have many outward demands made on their time and energy, Yogananda recommend that some rajasic foods be included in the diet. For them, a measure of rajas will help them to deal effectively with the restlessness in their environment.

Tamasic foods include all those which have a deadening or stupefying effect on the mind—foods such as alcoholic beverages and certain drugs, whether medical of hallucinogenic. Foods are tamasic also when they are lifeless, perhaps because they’ve been “cooked to death,” or have simply become stale, losing their vitality. Tamasic foods include also those which are too pungent, which is to say those with a strong, sharp taste. Excessively heavy foods, finally, which emphasize bulk rather than vitality, are also considered tamasic.

Rajasic foods include spicy foods such as mustard, onions, garlic, chili peppers, hot sauces, and other foods that have an irritating or over-stimulating effect on the body, and especially on the nervous system. 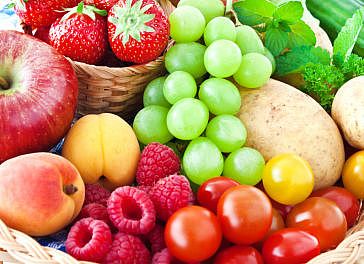 Sattwic foods are those which are calming to the nerves. They include especially fresh fruits, nuts, and vegetables.

To eat heavily, however, even if one’s diet is otherwise sattwic, can have a tamasic influence, since excessive bulk darkens the mind rather than uplifting or energizing it.

Particularly important is the consciousness a person holds while eating. Important also is the consciousness with which the food is cooked or otherwise readied for the table. Even unspiritual food can be spiritualized by a cheerful, uplifted state of mind while one eats.

Getting an Extra Boost 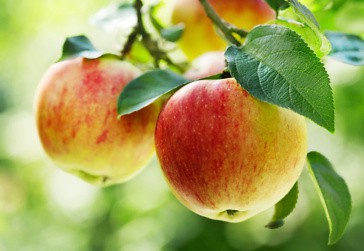 It takes time to reap the full benefit from even the best of foods. In the present age, with its exaggerated restlessness, people are impatient for results. A fruit’s essence is most highly concentrated in the blossom from which the fruit appears. The essences are made from the blossoms—which would be impossible to do from the fruits themselves—and contain in potent form the spiritual quality of each food.

A major benefit of flower essences is that they affect their users without bloating their stomachs! (How many cherries, after all, would one need to become appreciably more cheerful? or grapes, to become more loving? Their sheer bulk might have a tamasic, rather than a sattwic, effect!) Two or three drops of flower essence taken several times a day can greatly increase the spiritual power of these foods.

An interesting aspect of these wonderful essences is that they have also been found to help animals. Animals, in fact, respond more spontaneously because there is no negative “placebo effect” due to doubts or other mental reservations. 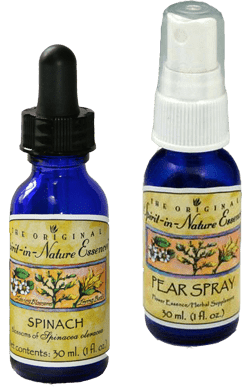 However people are slowly becoming more open to energy-based solutions to challenges. Flower essences work with a person’s spiritual nature. They help people to reclaim inner peace, innate sense of dignity, and indomitable strength in the face of obstacles.

Commissioned by Swami Kriyananda, Lila Devi founded Spirit-in-Nature Essences in 1977 to create blossom-essences from the foods Paramhansa Yogananda described. Lila Devi is also the author of The Essential Flower Essence Handbook, published in 6 languages, which has been used by Doctors Across Borders to train their physicians.

The spiritual qualities, and the specific food from which each blossom-essence has been made, are listed below:

An apple blossom for peaceful clarity.

These essences act with or without our affirming their spiritual qualities. Their effectiveness is greatly enhanced, however, when combined with affirmations, uttered out loud or mentally with concentration, will power, and energy. Spirit-in-Nature Essences offers suggested affirmations to use with each essence. 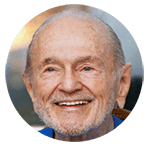 Swami Kriyananda (1926-2013) is a direct disciple of Paramhansa Yogananda and the founder of Ananda. He has written extensively about the spiritual path and composed many pieces of spiritually uplifting music. In his final years he traveled and lectured around the world, showing others how to more fully live in their Highest Self. 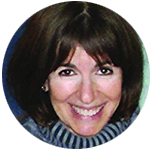 Lila Devi is an Ananda minister and the founder of Spirit-in-Nature Essences. She is an engaging seminar leader with over 40 years’ experience who lectures nationally and abroad. She has authored 4 books: The Essential Flower Essence Handbook, Flower Essences for Animals, Bradley Banana and The Jolly Good Pirate, and From Bagels to Curry, a spiritual memoir about a Jewish yogi’s journey from a traditional religion to a spiritual community (Ananda). Lila is considered one of the foremost flower essence developers in the world today. She graduated with honors from the University of Michigan with a Bachelor of Arts degree in English and Psychology and a Secondary Education certificate.