An Interview with Dr. Bryan Coleman-Salgado 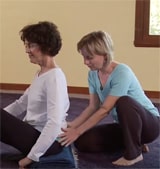 Q. Bryan, in 2008 you conducted a study to determine whether Ananda Yoga could help people diagnosed with multiple sclerosis (MS). What did the study show?

A. We found significant improvements in both the physical health and quality of life of those who participated in the study, essentially validating what Paramhansa Yogananda says about the positive effects of meditation and the Energization Exercises on the brain and nervous system. One participant did the practices everyday and had outstanding results in all the areas we measured. She had brain scans taken before and after the study which showed a reversal of the damage caused by MS.

For the study, I used the term “Ananda Yoga” to refer to the full range of practices offered at Ananda, including meditation, the Energization Exercises, postures with affirmations, and deep relaxation.

Q. What prompted you to do a study of how Ananda Yoga might help people with MS?

A. In 2007, a neurologist in Italy completed a study showing that persons with MS who took part in an 8-month Ananda Yoga program experienced a significant decrease in fatigue and depression. Upon learning of the study, the Expanding Light staff at Ananda Village decided to do an MS study that would validate these findings on fatigue and depression, but also look at the impact of Ananda Yoga on the physical symptoms of MS.

I am a long-time member of Ananda. When I heard of The Expanding Light’s intention to do a study, I felt that my background in neurologic rehabilitation research could help make the study scientifically stronger. I am a Doctor of Physical Therapy, and serve as a university faculty member, teaching and researching. At the time, I had just finished my doctoral thesis on treating MS. By studying MS, we were also seeking information that would be helpful to people with other neurological diseases.

Q. What was the purpose of the study?

A. Specifically, the purpose of the study was to determine if an 18-week Ananda Yoga program could effect improvements in strength, mobility, fatigue, balance, respiratory function, and in the quality of life of persons with early stage MS. “Quality of life” means how people perceive their physical and mental health, and how that perception affects their sense of well-being.

Multiple sclerosis is usually described as “progressive,” which means that you get worse as the years pass. That, however, is not a helpful perspective. There are many instances of people with MS who have made a complete recovery or have stabilized and not worsened throughout their lives.

In designing this study, we felt that Ananda’s spiritual perspective and yogic practices could be especially useful in offsetting the pervasive negativity that says that people with MS will inevitably “get worse and die.”

Q. What is multiple sclerosis and how is it caused?

A. MS is a chronic inflammatory disease affecting the central nervous system. Some call it “the great crippler of young adults” because the onset is usually from 20-40 years old.

The cause is unknown and the symptoms vary widely, but the most common ones are: physical weakness, abnormal muscle tone, loss of balance in walking, respiratory weakness, impaired bladder and bowel function, fatigue, depression, and cognitive impairments affecting attention span, concentration, and memory. Fatigue especially is a tremendous challenge for persons with MS and the most frequently cited complaint.

Since MS affects people in the prime of their working lives, those involved in “mental” work can feel desperate about diminishing cognitive capacity. One of the participants in the study initiated a lengthy discussion among the group about the cognitive impairments of the disease (attention, concentration, memory) and how much more terrifying they were than the physical impairments.

Q. Other than the Italian study, did you draw upon any other studies in designing the Ananda Yoga study?

A. We looked at several studies that used traditional physical therapy or included only one yogic practice, such as postures.

However, while attending an international yoga therapy workshop, I had learned that the best researchers were discovering that the most effective yoga programs provide an initial period of immersion long enough to take participants out of their usual routines, and to allow them to go deeply into all of the practices. Offering yoga once a week in a community setting does not seem to have nearly the same effect as an initial introduction of at least one full day of immersion.

Additionally, it was becoming apparent to researchers that a “multi-component” approach (more than just postures and a brief meditation) was most effective, especially for improvements in mental health.

Our approach incorporated both of these “best practices.” We did an intensive 5-day workshop to start off the MS program, and Ananda Yoga certainly has multiple components.

Q. Who were the study participants and how were they recruited?

Twenty-eight people diagnosed with mild to moderate MS participated in the initial 5-day training. Nearly all of them were still working for a living, although a few had serious disabilities that altered their work and family lives.

Q. I understand that you tested all study participants before the start of the 5-day training?

A. We tested all participants on both the physical and quality of life impairments caused by the disease. This initial testing gave us a baseline to compare with later re-testing to determine how much the practices helped them.

After the initial testing, participants took part in classes and workshops in Ananda Yoga practices at The Expanding Light. They also attended classes discussing the scientific evidence showing the positive impact of yogic practices on the nervous system, especially meditation and the Energization Exercises.

After the 5-day intensive, participants returned home for 18 weeks of Ananda Yoga practice. We asked them to practice the techniques at least 3 times a week and to keep a journal. To support them in their home practice, we gave them an illustrated practice manual, and a DVD with a guided meditation, and a demonstration of yoga postures and Energization Exercises.

The Expanding Light staff kept in touch with everyone through weekly inspirational emails and monthly phone calls. The group proved very cohesive and they formed their own “mini community” with a blog that lasted at least two years beyond the study.

Q. Did participants have any trouble keeping up with their practices at home?

Q. When the participants returned to The Expanding Light in May 2008 for re-testing, did you find that they had gotten better?

A. Most definitely. Every single area of functioning that we measured showed improvements for the group as a whole. These are particularly compelling results when studying a progressive disease such as MS, which is usually thought of as an ever-worsening condition.

Yet even more critical from a scientific perspective is that our re-testing showed that there were statistically significant (that is, beyond just a chance) improvements.

To measure physical changes, we used standardized tests for balance, walking speed and endurance, leg strength, and respiratory capacity. We found improvements in the following areas:

To measure quality of life changes, we used the standardized MS Quality of Life survey, and found improvements in the following areas:

Q. Ananda Yoga includes a fairly large number of practices. Did the study show how many of the practices one needs to do to get the benefits, and for how many days a week?

A. We think that one explanation for the improvements is that Ananda Yoga is multi-component – it includes meditation, Energization Exercises, deep relaxation, and postures with affirmations. The data shows that with one exception, participants practiced every component of Ananda Yoga, but that they varied in how frequently they practiced.

Q. What are the most important lessons and implications from the study?

A. The study showed that Ananda Yoga helps people with a significant chronic disease to be more uplifted, to be less depressed, to be less at risk of falling, to be much less fatigued, and to be more socially active because they feel less noticeably disabled.

For persons with a chronic neurological illness, perhaps the most significant overall result is that participants not only did not get worse, but they all improved. In medical science, developing a therapy that slows the progress of a chronic disease is considered a huge breakthrough. If, as this study suggests, a regular practice of Ananda Yoga can not only stop a “progressive worsening” of a chronic disease, but can also bring about improvements, then Ananda Yoga offers potentially positive benefits for everyone.

It is clear to me that we possess – in Yogananda’s teachings and especially in the expression of these teachings through Ananda Yoga — very powerful tools. We are only now beginning to have the scientific means to measure just how powerful they are.

Bryan Coleman-Salgado is a Doctor of Physical Therapy, and teaches neurologic physical therapy as a full-time faculty member at California State University, Sacramento. He is a Sevaka life member at Ananda, and has been a yoga practitioner for 34 years.

Clarity Magazine articles can be printed in “text only” format, using your own computer.

About the Author
Dr. Bryan Coleman-Salgado 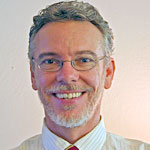