Ananda’s outreach efforts in Spanish started in the ’80s with Marga Dominguez-Goering. She began by translating Swami Kriyananda’s “Festival of Light” ceremony performed at Sunday Services, and Ananda’s beginner lessons in meditation.

In 1997, with my arrival at Ananda Village, we founded Ananda’s Spanish Ministry, which is now online at www.anandaespanol.org.

Marga (from Spain) and I (from Colombia) both shared the desire to spread Paramhansa Yogananda’s teachings and Ananda’s way of life with Spanish speaking people.

However, without a Spanish speaking population nearby and without a web site, the Spanish ministry was not going to grow very fast – this was obvious. Ram Smith, an Ananda minister, encouraged us to organize a workshop at Ananda’s Meditation Retreat. We created a very simple web site and a whole family from Colombia, who lived in the San Francisco Bay Area attended. About 6 people came.

In the following months and years, we continued our outreach efforts, and attracted devotees from all over – including some who were interested in sharing the teachings of yoga and meditation, helping them to reach more people.

Seeing these students’ commitment and devotion to this spiritual path made us feel that Paramhansa Yogananda was helping us to find leaders that could take these teachings back to their own homes, in places like Spain, Argentina, and Los Angeles. When the Internet became popular everywhere, the work was cut out for us.

In time, with the help of Ananda’s Director of the Kriya Yoga Ministry, we decided to focus on finding and training people who were interested in Kriya Yoga. Paramhansa Yogananda called Kriya Yoga “the easiest, most effective, and most scientific avenue of approach to the Infinite.”

Students who take Kriya Initiation start with lessons in meditation, continue with the Spanish version of The Art and Science of Raja Yoga, and accept discipleship to Paramhansa Yogananda before learning the techniques of Kriya Yoga.

The students download the lessons through our web site: Ananda Español. 3,000 people signed up for the lessons in the last 3 years, and we are getting about 80 new students a week! We have students in 26 countries and new meditation groups are forming on a regular basis.

On one end, we have Marga and I, who correspond with new students, welcoming them and answering their questions. I coordinate North America, Mexico, and Latino America, while Marga coordinates Spain and other countries. We have students from Croatia, Malaysia, and Israel! (You can find Spanish speaking people everywhere in the world.)

An Ananda minister arranging flowers before a retreat in Venezuala

On the other end, we have the leaders of the meditation groups where we send nearby students so that they can have 1-on-1 training. We also offer retreats where people get to know us and can meet other people on the same spiritual path.

In Spain we are seeing an incredible increase in students, and new leaders are coming forth, like Pedro Rapp, who came to a retreat in Segovia in 2005. With other Ananda members in Spain he has trained 2 new Kriyabans in his area and has helped train several disciples of Paramhansa Yogananda.

Having an Ananda community nearby whose teachers can travel – like Ananda Italy – and having a handful of dedicated leaders interested in spreading these teachings, the number of students interested in Kriya Yoga sky rockets.

A challenge is to take this model to Latino America, where there is no community nearby, and where students have a hard time getting visas to come to America. Still, the Spanish ministry has given Kriya Initiation in Cuba, Venezuela, and now Mexico, whose future looks very good. In Mexico, recently, another Ananda member and myself were invited to give discipleship training to 80 new devotees (below) who are now on their way to taking Kriya Initiation.

“Now I love to meditate!”

These are some of the things that we are hearing from our students:

“Thank you, for all your help. I have tried so many different techniques to learn to meditate and not until now have I seen any progress. I feel deep peace and perceive a deep breakthrough in my search.”
– Alvaro, Mexico

“I just started this path and already saw important changes in myself; I have more tolerance, I feel calmer and more patient. Even my friends and family can tell the difference. My goal is to contact God through my gurus with Ananda’s help. Thank you so much for everything.”
– Francisco, Ecuador

“I’m really enjoying the teachings of Paramhansa Yogananda. I found them exceptional and full of practical and spiritual wisdom.”
– Rafael, Spain

“I have finished the second part of the lessons and I have a strong desire to continue and to prepare for Kriya Yoga.”
– Maria, Argentina

“The Energization Exercises are excellent!! Thank you. Now I love to meditate!”
– Olga, Mexico

About the Author
Nayaswami Anaashani 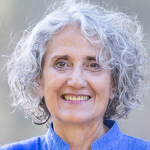