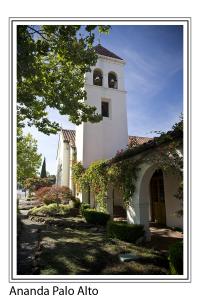 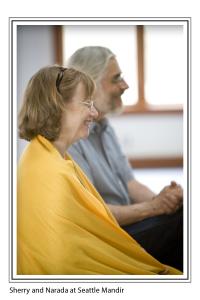 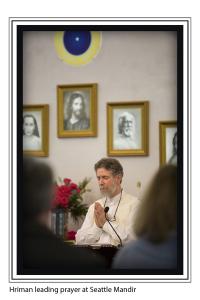 Hello everyone. I hope this blog letter finds you all well.

As you probably know, Swami Kriyananda arrived in the United States on Thursday. He is staying in the Ananda Palo Alto Community for a few days and will arrive at Ananda Village on Monday (today) most likely.

On Sunday, Swamiji was scheduled to do a live telecast to the Seattle community from Palo Alto. Many people dedicated many hours to try to set up this live feed of Swami’s special greeting and talk to the folks gathered in the Seattle mandir. The day before the talk it looked like this amazing technology would work perfectly and then on Sunday this technology decided to be very temperamental.

My husband, Dave was there to video the talk, so I was there to assist everyone, which mostly meant moving boxes, setting up lights and making sure everyone was drinking water. (It was very warm in the Bay Area this weekend)

It was beautiful to see that despite long hours of problem solving and creative attempts at setting up this complex video teleconferencing system that Kent, Leo and Dave could remain so calm and joyful. And as it turned out they were so accepting of the way things worked out versus what they wanted to have happen. Trying our best is always necessary, but not being attached to the fruits of our labor brings joy and harmony.

I was able to take a few photos just as Swamiji sat to begin his broadcast. There were many of us in the little room. It was a two-way connection on a laptop computer that was in front of him. He waved to the computer because he could see all the people in the room in Seattle. Swami spoke for 25 minutes, answered questions and despite being jet-lagged, said he feels bliss all the time. I felt very blessed to be in the same room with him. And seeing how focused he was on talking to the devotees in Seattle (even though he could only see them on a computer screen), I am sure they felt blessed, too.

I am including other photos of the Palo Alto Mandir with its beautiful new sign. I am also posting some photos of the Seattle community that I took on a recent trip to Seattle. I accompanied Dave and the Ananda Fundraising team which included Catherine Van Houten, Lisa Fontaine and Parvati Hansen. As you can see, the Seattle area was beautiful and I was very pleased to be able visit with folks up there and see all the beauty that is manifesting in the community and the mandir.

I am typing this up in the car on my way home to the Village (Dave is driving) and hope to post it as soon as I get home. Then, if luck is with me, I will catch a glimpse of Swamiji as he enters the village this afternoon.

There has been a lot of great things happening at the village (community gardens and building upgrades) that I hope to share with you in the next days and weeks ahead. The Expanding Light amphitheater is being upgraded and should look great in time for Swami’s first scheduled class during his birthday celebration weekend, June 20th. We hope for a live broadcast and video uploads of those talks!

God Bless you all!

Oh, and please keep up your prayers for Swamiji. He says he can feel them. I send you my prayers and wishes for a good summer.