During his stay in America, Swami Kriyananda met with various groups, including a number of

pilgrims from Ananda in India. (The monks were also invited – that’s how I came to be there.)

The gathering, or “tea,” took place at Swami Kriyananda’s home at Ananda Village, the Crystal Hermitage. The centerpiece of the Hermitage is a large blue dome overlooking the roaring Yuba River, which is often used for gatherings like this one. It was here that we sat down, carrying snacks, for a very informal question and answer session.

Solar Power and Ice Cream:
A Few Nice Things From the Afternoon

Swami Kriyananda was a gracious host. He shared his words, but much more than that, he shared his kindness and friendship. When he had been talking with the Indians for a while, some of them set their food aside, probably out of respect, or because they had experienced an inner stillness. The conversation continued for several minutes.

Then Swami Kriyananda stopped in mid-sentence and said to one of them, with sincere motherly concern, “Eat your ice cream!” I was touched that he would notice something seeming so insignificant! Sometimes you see love expressed most clearly in small things like that.

Everyone laughed, and a few picked up their food again.

Swami Kriyananda also spoke at length about Ananda’s new Solar Project, emphasizing that cheap solar electricity could help villagers in India and all over the world. He pointed out how even just a little good light at night could transform the lives of people who are completely “off the grid.”

Finally, he talked of service: an important aspect of the path that Yogananda taught. He said that we gain spiritually when we give. The phrase he used was:

“What you give out the front door comes in through the back.”

Either studying his life or meeting him in person, one can see in Swami Kriyananda that he has lived and realized this truth. 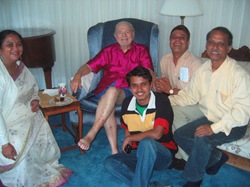