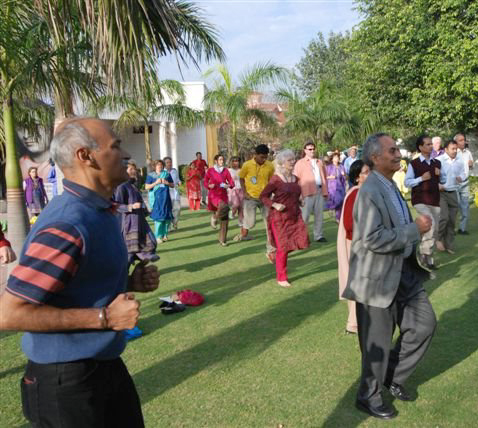 This weekend is the annual Ananda retreat in honor of Paramhansa Yogananda’s Mahasamadhi, here in Gurgaon, India. It’s such a joy to practice meditation and Kriya Yoga with people from all over the world: India, America, South Africa, and nearly every European country. Seeing the harmony and love between the people here shows how easy it would be to achieve world peace if everyone meditated together!

This morning, Swami Kriyananda gave a deeply inspiring talk, beginning with a discussion of Sanatan Dharma, which he described as the truth underlying the entire universe. He continued by reading excerpts from his new book, The Revelations of Christ, which explains the true teachings of Christ – Sanatan Dharma – as opposed to the ‘religious’ teachings of Christian churches over the centuries.

His talk is now on the Ananda website, along with other talks and classes given during the retreat.

It’s especially inspiring for me to see the attitude that Indians have toward great teachers. Recently, Swami Kriyananda has been experiencing some health problems. It was questionable whether he would even be able to give the talk today.

At breakfast this morning with some Indian guests, I commented about the possibility that Swamiji, as we call him, might not be well enough to speak. One young Indian man remarked that as he was eating his breakfast, he was giving all of his strength and nourishment to Swamiji. I could see that this was a natural attitude held by many people here.

In the afternoon, there were workshops by Ananda teachers from all over the world on art, astrology, healing, and education.

The evening featured the first-ever performance in India of Swamiji’s play, The Jewel in the Lotus. The setting of the play is a village in the Indian Himalayas. The themes are various aspects of the spiritual search universal to all seekers.

The actors performed it superbly, with great joy and deep feeling. Afterward, Swamiji remarked that it was the best performance of the play he had ever seen. The audience was captivated throughout.

One of the themes of the play seemed especially appropriate to modern India. It concerns the story of Romesh, a successful businessman who wants his son Narayan to join the family business. Narayan wants to dedicate his life to God. In the end, after much drama, Romesh blesses his son to go and seek God.

In my week here, I’ve already seen a couple of cases of young Indian men who are part of Ananda India, and whose parents are still against their child’s search for God. It is certainly a universal theme, but one that seems more common in the up and coming Indian economy.