“If formal renunciation is an option… it would be wise to consider embracing it.”

This was in the middle of text which made it clear that, to find God, it is not necessary to become a monk or a nun (i.e. a formal renunciate). “Great saints,” Swami Kriyananda wrote, “are to be found in both the single and married states.” (Swamiji later explained these thoughts more fully in Sadhu, Beware!.)

That first statement stayed with me, though, and I prayed intently for guidance. “Should I be a formal renunciate or a householder renunciate?” I asked this question over and over. I really wanted to know.

Over time, I felt a growing desire to be a monk. Not having received any other guidance, I reasoned that starting in this direction would help me see if it was right. I decided to attune myself to the monastic life.

Ananda’s first monastery, and what happened to it

For the next year, there wasn’t anything at all formal about my formal renunciation! Everyone I asked told me that there weren’t any Ananda monks in America yet, though a monastery had been started in India.

Monks from East and West in Gurgaon, India, March 2007

After asking around, I got in touch with Nitai Deranja, who had been the head of the monks 30 years ago, in the early days of Ananda. In those days, there was something of an imbalance – many of the most dedicated members of Ananda were formal renunciates. Dedication isn’t an outer role, however; its true home is in the heart.

Paramhansa Yogananda’s teachings emphasize this truth: that one can live a life dedicated to God while carrying out the duties of family life or fulfilling other normal responsibilities. His most advanced disciples, including Rajarsi Janakananda and Sister Gyanamata, either were or had been married.

If things had stayed the way they were, probably Ananda would would not have become as successful as it is today. To help the community become more balanced, Swami Kriyananda began to strongly emphasize the married and family life.

Over time, nearly all of the monks and nuns married, including Nitai. Their experience with formal renunciation helped them in their new and needed role of the “householder renunciate.”

During this time Swami Kriyananda did say that some day Ananda would need strong monasteries again – that they would be necessary in a well-rounded spiritual community. 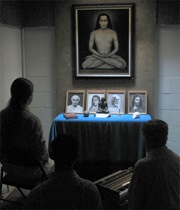 The Babaji Cave, once a root cellar, is now a meditation temple

When I met him in 2005, Nitai was again living as a monk. He and Ray, another Ananda member, were meditating each Sunday in the Babaji Cave at Ananda’s Meditation Retreat. I joined them, along with Narayan, another Ananda Village resident.

After the meditations, we shared thoughts about the spiritual life. Becoming a monk felt more and more right, and I decided to make a commitment to it.

I was enthusiastic to take some kind of life-long vow. Every time I brought it up, Nitai mentioned that the most Swami Kriyananda would ever give to the monks during the early years was a 1-year vow – and he seemed reluctant to give even that. A 1-year vow is basically a 1-year commitment to formal renunciation. It’s safer than a lifetime commitment, and can be renewed every year.

When I took a 1-year monastic vow for the first time in 2005, I felt blessed. Soon afterwards, Nitai, Ray, Narayan, and myself founded the monastery at the Meditation Retreat.

(Left to right) Myself, Nitai, and Narayan in front of the monastery buildings in March, 2007.

The above isn’t fixed by any means – it changes with our own individual schedules, and also from year to year. On Mondays and Thursdays we often listen to a talk of Swami Kriyananda’s during dinner, and this last summer we also went jogging or played soccer on occasion.

Each Wednesday I have 1-on-1 meditation classes with 1 or 2 of the high school boys, whose dorm is next to the monastery. The high school boys have a half-hour meditation every weekday morning that they spend at the dorm. (Some stay all week, and some come for a couple of days each week.)

Nitai once shared with Narayan and I that, just as a married man needs to spend time with his wife, monks need to spend quality time with Divine Mother (the Mother aspect of God; “Divine Mother” is another way of referring to Him). Spending time in silence, he said, is like “taking Divine Mother out to dinner.”

For this reason, I have been spending some Saturdays in silence, meditating and chanting for longer periods of time, reading spiritual books, getting out into nature, and at the same time trying to practice the presence of Divine Mother. An evening or morning of silence is something that many people can try. (If you want to try it for a whole weekend, you might enjoy the upcoming Guided Silent Retreat at The Expanding Light Retreat led by Narayan and myself.) It has helped to strengthen my love for Her.

The extra freedom for silence and seclusion that I’ve found in the monastery has been helpful. These last 2 months, with the changing of the seasons from summer to fall, I’ve felt a deepening certainty that the path of formal renunciation is for me. Focused on realizing Divine Mother as my true companion, I have felt a deepening desire to be more dedicated to Her alone. 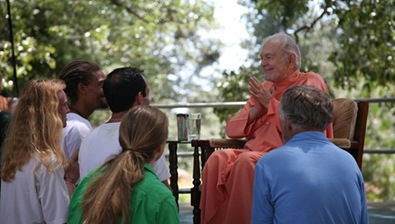