On This Day In The Life of Paramhansa Yogananda 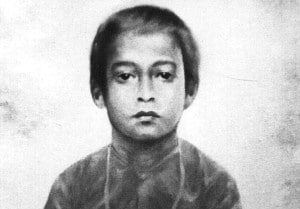 THE PATH OF SELF-REALIZATION

Yogananda was born as Mukunda Lal Ghosh in Gorakhpur, India.

Yogananda presented a play with the Boston branch of the Yogoda Satsanga Society of America titled “The Little Clay Cart” at Jordan Hall in Boston.

Yogananda gave a talk at his birthday celebration that was later published as In the Glory of the Spirit.

Yogananda gave a talk at an informal birthday gathering that was later published as Beholding the One In All.

Yogananda was unable to attend his birthday party in person, but addressed the participants over the “loudspeaker.”

Yogananda gave a talk at his last birthday celebration that was published as Awake in the Cosmic Dream.