Tulsi-da once told me how he had come to know Master. “One afternoon,” he said, “in May, 1909, I was resting on a bench in Greer Park, near my home. I had just completed an invigorating run, and was thinking about the big hockey match that was scheduled the next day. All of a sudden, I saw this long-haired boy come up to me. I didn’t recognize him, and was certain we had never met before. He asked, ‘Aren’t you Tulsi Bose?’

”Astonished, I replied, ‘But who are you?‘

”By this time I was surprised not only by this boy’s abruptness, but by his persistent interest in me. I had just barely got out a halting ‘Yes . . .’ when, sure of me now, he cut in quickly, ‘All right, let’s run together!’ I didn’t see why we shouldn’t, so we started out at a fast clip.

“For the first lap we were running side by side. By the end of the second lap, however, he was ten feet ahead of me. I couldn’t believe my eyes! I was a very good runner, and besides, I knew all the runners in our vicinity. Who was this boy? Where did he come from?

”I was breathing quite heavily from my efforts to beat this upstart! Yet how could I quit? I didn’t want to be defeated! So I said, ‘Let’s do it a second time.’ This time, I ran as fast as I could. Still, I couldn’t beat him.

“Finally I asked him, ‘How is it you can run so fast? Your stride is not that of a runner at all.’ He replied, ‘I will teach you. Come to my home tonight.’

“’Why, that is the home of Bhagabati Babu!’

“At midnight I reached Mukunda’s home at 4 Garpar Road. He was standing outside waiting for me. We entered the house together and went to his room on the ground floor. He shut the door, and we sat down, arranging our legs in the lotus pose. He then touched my forehead, and my mind became completely still. He taught me some yoga meditation techniques, and we remained there the whole night. Before leaving the house early the next morning I got to hear the story of how and why he had found me.

”’It has not been quiet here at home,’ Mukunda said, ‘with so many children running all over the place, and guests always coming. I’ve found it disturbing not to have time for solitude and meditation. One day I cried to Divine Mother Kali, “Please give me one good, devoted friend with a quiet home where I can be more with You.” Later, I was walking down the street near our house when suddenly I went into a trance. In vision I saw a young man about my own age playing in front of what seemed to be his family home. Divine Mother said to me, “That boy is a good devotee, and loves Me very much. You will get all the help you want from him and his family.” Hearing these words, my eyes filled with tears. Mentally I bowed at Her feet, thanking Her for Her love for me. It was soon after that we met.’ 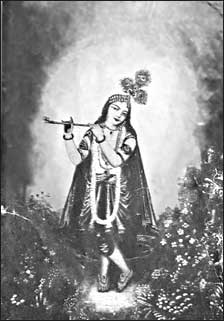 The painting of Krishna by Hari Narayan Bose, father of Tulsi Bose

“I invited Mukunda to our house the next evening for dinner. He came over in the afternoon and I introduced him to my father, Hari Narayan Bose. Father was very happy on seeing him, and told him, ‘It feels as though you were a part of our family already! What is time when recognition is so sudden?’ ”Mukunda did become an honorary member of our family. He used to address my father as Baba Mahasaya (‘Father with a great soul’). Ever since that afternoon in the park, we two boys spent much of our time together.“

The following year, Mukunda’s cousin Prabhas-da joined the two friends. Together they would go to Dakshineswar and sit under the Panchavati, or Bel tree, on the temple grounds, for night meditations.

Tulsi continued, ”One day, in 1919, I was talking with Mukunda about the advanced yogic state called samadhi. He said to me, ‘Come sit here beside me. Practice the Kriya I have taught you.’ I did so. He then touched my forehead. Suddenly I lost outer consciousness. My awareness began spiraling upwards. I saw countless radiant beings, beautiful scenes-other worlds!

“’How was it?’ he asked. I told him what I had seen and how beautiful it all was. ‘Please,’ I said, ‘show me how I can be in that state all the time.’ He laughed and replied, ‘These experiences are not for you in this lifetime. You must wait till your next life. Meanwhile, do Kriya every day, and live a very simple existence.’

”One day,“ Tulsi continued, ”my father, concerned for my future, asked Mukunda if I would go to the Himalayas and live out my life as a yogi. Mukunda answered him, ‘Tulsi-da will not go there. He will stay here with you, marry, and have three daughters, one of whom however will not live long.’ Everything came to pass as he’d said. I married, had three daughters, and one of them died when she was only four years old. The other two lived.“

I must add here, parenthetically, that the youngest daughter, Hassi, years later became my wife.

”Two years later, when my father heard that Mukunda wanted a place in which to hold meditation classes, he purchased the plot of land behind our home and gave it to us boys, along with the money to build a three-room thatched hut where we could have our meditations and be alone with God. It was in this way that Mukunda began his very first school.“

Swami Kebalanandaji, a deep yogi and noted Sanskrit scholar, soon began teaching there. He was a devotee of Lahiri Mahasaya, who called him Shastri Mahasaya, which is to say, ”Learned in the soul-meaning of the scriptures.“ Mukunda was thrilled to have such a divine mentor. Together they spent many hours daily, learning the teachings of the great ones. 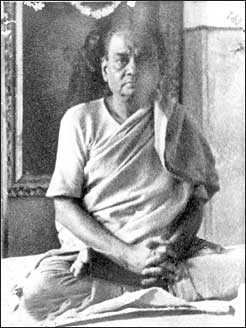 Atmananda at the home of Tulsi Bose.

Friends who were sincere in their search for God often joined Mukunda and Tulsi-da in their new school. In 1916 a devotee offered Mukunda a piece of land in Dihika that could serve as a better place for a rapidly growing school. Then it was, also, that Mukunda took his monastic vows from his guru Sri Yukteswar, becoming known from then on as Swami Yogananda.

Sri Yukteswarji came to Tulsi’s home to see Yogananda’s school ashram before they moved to Dihika. It wasn’t long, however, before they had to leave Dihika also, owing to an outbreak of malaria. In this dilemma, the Maharaja of Kashimbazar came to the rescue. He offered Swami Yogananda a plot of land in Ranchi, Bihar. To those grounds, in 1918, Yogananda eventually moved his school. In this salubrious climate, a growing body of students came in order to learn ”the ways of God and mathematics.“ Two years passed. Then Divine Mother called Yogananda to America.

Tulsi-da, in speaking to Daya Mata and the others of her group, recalled fondly, ”He never forgot me. He would write often from America and tell me and my family of his experiences in that new land. It was hard to imagine what his life was really like. I wondered if I would ever see him again.

“Then, in 1926, my father passed away. In 1927 I married Martan Ma. Guruji had picked her out for me, and blessed her and also our first daughter.”

Later, when Master returned to India in 1935, he stayed with Tulsi and Martan Ma in their home. He also blessed their third child in Martan’s womb, saying, “This child will be a girl, and will be very devoted.” He gave Martan an apple “for the baby,” whose name was Hassi, which means, “Laughter.” Indeed, Hassi has always been blessed with a happy disposition.

Tulsi and Master traveled together to many places. One day they were meditating together with Prakash Das and Jitendra (Jiten) Mazumdar,(1) when one of Tulsi’s cousins rushed into the room crying urgently, “Come quickly! It’s my wife; she’s dying!”

The two doctors in attendance had told him there was no hope for her recovery. The cousin knew Master, however, and had deep faith in him. Therefore, “hoping against hope,” he had come here for help. Master told the others to come along.

On arriving at the cousin’s home, Master went immediately into the bedroom. There, asking the others to wait outside, he closed the door. Meanwhile, another highly respected physician came to see what he could do. He too was obliged to wait outside. More than forty-five minutes passed. Finally, Master came out of the room; the cousin’s wife came with him, walking without assistance! The doctors, all three of whom were there, were astounded. This, they exclaimed, was truly a miracle.

Master said to the husband, “After we leave, she will sleep one or two days. Don’t be alarmed, and don’t call her. She will be all right, and will eventually regain her full strength.”

Not a word passed between the friends after they left. They were overcome by what they’d witnessed. On arriving at Tulsi’s home, Master asked Dakha to cook him a curry. Rajaram, a young man who served as the housekeeper, later gave him a massage to help restore the energy he’d given out.

After that, the cousin’s wife came frequently to see Master, and eventually took initiation and discipleship from him.

“One day,” Tulsi-da said, “Guruji took us to Shantiniketan (‘Abode of Peace’) to visit the great poet Rabindranath Tagore. Guruji told us he was a highly advanced soul. After we’d been there awhile, and were preparing to start back to Calcutta, Master asked Tagore, ‘How do you feel (meaning, about his life)?’ The poet replied spontaneously in poetic style:

Yes, I am a Traveler.
Nothing can hold me back.
Pleasure and pain seek to bind me,
But, ah! my home lies far beyond.

His non-attachment impressed me deeply.

Tulsi understood Tagore’s desire to be released from banal office work, for he too had never held a traditional job. Indeed, he had never held any job at all! He spent all his time doing sadhana, as Master had asked him to do.

It was about this time that Master announced a wish to purchase a large piece of land on the bank of the Ganges. Prakash Das began the search for the perfect ashram setting. At last they found, in Dakshineswar, a three-and-a-half-acre piece right on the Ganges. Master went twice to see it, and finally decided to buy it. He sent Prakash Das to fix the price, telling him, ”As soon as I return to America, I will send you the money for the final purchase.”

Master left India at the end of 1936. Prakash Das sent him a hundred photographs of the land, from different perspectives. The property was finally purchased in 1939. Master was very happy. It became a place of great peace-ideal for meditation!

Chapter 6: Ranchi — Then, a Trek to Badrinath!