I was born in North Calcutta on March 20th, 1927, at my family’s home. When I was six months old my father died, and my mother was obliged to leave our home owing to certain problems with our property. Mother and I went to live in the home of my mother’s brother in South Calcutta.

At seventeen, a close friend and I joined the army. In the end we joined the resistance movement against British rule, and were eventually jailed for five months. After my release in 1945, I was accepted into Ashutosh College, where, in 1947 (the year India won its independence from Great Britain), I received my B.A. degree. From 1949 to 1954, I was employed as a refrigeration engineer, and in that capacity was sent throughout India. Thus, perhaps, began my “career” as a traveller!

During that period of my life I had very few friends. My mind could not accept wine, dancing, smoking, and other so-called “pleasures” of youth, so I kept to myself much of the time. My mother arranged for me to marry when I was twenty-eight, but, having no desire for marriage, I declined.

In 1966, during a visit to the great woman saint Anandamoyee Ma, I received an answer from her to my burning question: “Should I live the rest of my life in Himalayan solitude?”

“You cannot do so,” she said. “You will have to return and enter family life. Your wife, however, will belong to Yogananda’s spiritual family, and will herself be a devotee.” Another great saint, Kailash Pati, with whom I stayed in Ranikhet, a Himalayan town, told me the same thing later on.

I had already met Hassi, my wife to be, on 4th May in 1955 at the Yogoda Satsanga Society ashram outside Calcutta, but had had no interest in marrying at that time. In 1969, however, on 3rd February, we were finally married. Our son Manash was born 4th January, 1970. I am my mother’s only son, and Manash also is my and Hassi’s only son. 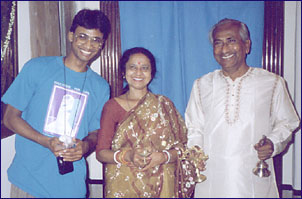 Manash, Hassi, and me

Chapter 1: I Find My Guru