It was December 2003 when Swami Kriyananda and his “landing party” arrived in Delhi and moved into a house in the Gurgaon, Delhi suburbs. 4 years later, Swamiji, with the staff of Ananda India and some friends, gathered to reflect on our growth and accomplishments, and to look to some of our future directions. The recording of the celebration is available below.

The celebration began with a prayer and a favorite chant, “O God Beautiful”, originally written in Hindi by Guru Nanak (founder of the Sikh faith) and translated into English by Paramhansa Yogananda. It is heart-warming to sing this song to God in 2 languages, uniting all our voices. (You can listen to the chant below).

Listen to the chant here

The united voices continued with songs by the choir. Swamiji’s music conveys truth and joy through beautiful words, melodies, and harmonies. In many ways the spirit of Ananda can be experienced through our music. As Swamiji said in his talk that evening, “It is wonderful to see so many Indians singing–we have launched a choir here.”

Next we turned our attention to the video screen to watch a slideshow: “Scenes from the Early Years”. Not so much a documentary as a string of captured moments, these photos presented many pivotal events in Ananda India’s history.

Especially engaging were the video clips of a talk Swamiji gave one afternoon during his first months here, the opening of The Wishing Tree store in 2004, and Swamiji’s last day of filming his daily television shows in 2005.

Swamiji then stood and told the story of how he came to India. He detailed some of the major accomplishments, adding his personal commentary. He included a few of our future directions, and held up two new publications: The Bhagavad Gita verses published as a small book, and a special edition of Education for Life.

It was inspiring to witness how Ananda India has grown in a short amount of time. Relative to most of Ananda’s other colonies, Ananda India is quite young–this year Ananda Assisi celebrated its 20th anniversary, with most of the west coast colonies not far behind; next year Ananda Village will complete its 40th year.

“Scenes from the Early Years” video 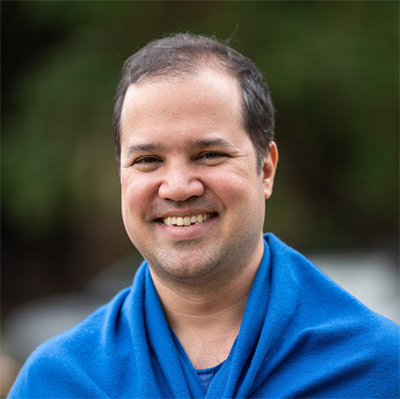