“How do I know if I have overcome a particular karma?” Swami Kriyananda was asked by a student.

“When you are no longer afraid of it,” was his reply. I have often thought of these words and pondered their meaning.

Many people are afraid of dying. Those who are not are usually at least afraid of the circumstances that might surround their death, because of the pain that might be involved. Swami Kriyananda, through his life, has shown us repeatedly his courage, self-control and detachment when it comes to dealing with physical pain, but most importantly: he has taught us how, and encouraged us to imitate his example ourselves!

My name is Brahmachari Hezequiel, I live in the Ananda Pune Community in India along with my brother Baraquiel, and today I had the opportunity to ponder on those words of Swamiji’s, as they relate to physical pain, through a more direct experience than usual… 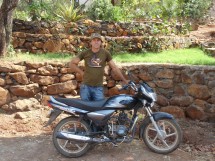 The recently revived bike, repaired by Paul, a devotee from Australia (pictured)

A month or two ago, my brother and I learned how to drive a motorbike. It was a useful thing to know, as it eliminated, for the most part, the need to ask other people to drive us to the places we needed to go.

However, five days ago, a friend of mine had a bike accident; he was badly scratched all throughout his body. Although it was nothing serious, in the sense that his life wasn’t threatened nor was his body in any permanent way, he went through a lot of pain, mostly during the healing process, in which the community’s doctor sprayed some “Antiseptic Spray Bandage” on his wounds: it burnt… a lot.

This event left me wondering: what if that happened to me? Would I be able to take it? Moreover, I wondered: what if I fall from the bike at a speed? Is it possible to survive that or is it certain death? How bad would my body be injured if that happened? These thoughts were dancing in my head throughout the days.

Now, the advantage (or disadvantage if seen from the other side) of being in the spiritual path is that you can expect your karma to be back at you very, very soon: sometimes in a matter of hours! In addition, “what if” situations that are given energy by being repeated over and over in the mind also tend to come rather fast… in this case it was five days later. 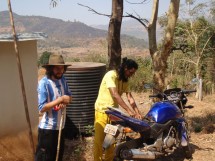 Baraquiel, my brother (left) and Shurjo contemplating the sad fate of bikes in the community

The Ananda Community in India is beautiful, peaceful, full of joy and the masters’ blessings, but it has one drawback: the internet connection is terrible. So, we have to go to our city center (about an hour’s drive from the community) whenever we need a good connection.

Today was one of such days; Swamiji’s second class on Success and Happiness was happening, and therefore there was a mass migration to the city in order to watch the streaming video. Most people managed to fit in the van, but my brother and I had to take the windy way: we’d have to take the bike.

And so it happened that, as we were driving happily on the highway, like we had done so many times before, the routine was broken: a curve approached, and instead of everything being fine, as habit would have it, it went wrong and we went off the road. I lost control of the bike and, still going at 60 km/h, I was suddenly aware of the fact that I was still moving forward: except that instead of a bike under me, my body was acting as “wheels.” I vaguely noticed my brother also falling and rolling over me, then stopping a bit ahead of where I was laying.

And this was the start of a day of joyful discoveries…

The first of them was just a reinstatement of the wonderfulness of the spiritual path and the way it changes people. My brother and I followed the exact same process once we finished rolling on the ground: we looked for each other, and we asked “are you okay?” It was only after that that we checked our own bodies to look for damages, and again both said “yes, don’t worry.” Which loosely translates to: “I’m still alive, even though I’m paining all over. But it doesn’t matter, how are you?”

As it happens, my brother had, by good fortune, come out of the ordeal almost unscratched! My body, however, was another matter altogether. Although it didn’t get to the extremes that my friend got in his accident, I got enough injuries to get my “wish” of knowing what he felt come true. However, by God’s grace, even though my body was paining a lot, my mind (now knowing that my passenger was okay) was happily soaring on the thought of God, and my brother and I had a fun time making fun of the situation which, ignoring the bodily damage, was pretty funny on the ridiculous side.

Maybe half an hour later, a friend of ours came to pick us up (and the bike, rest in peace) with a truck. Then I realized that, because of the accident, the normal instinct of protecting the body, which is always there to a larger or smaller extent, had very much diminished for the time being… after all, my body was already a mess, it wasn’t even worth it to try and protect it any further! I found this tremendously liberating, and I had a marvelous sense of freedom during the ride back home, enjoying the beautiful day, the scent of the beginning of the summer and just life in general.

Once we were back home, it was time to go through the “shower to clean the wounds, then spray them” phase. That, in particular, was what I had been dreading all of those days before in my “what if” mind scenario; now, however, even though I wasn’t at all thrilled at the prospect, I was so joyful that I could only laugh when thinking that I would have to go through the same process that I saw my friend undergo only five days before! Still I hesitated and tried to delay the moment as much as possible; but, in my mind, it was all part of a big comedy. After a few minutes, I finally went for it…

Make no mistake: it burnt… a lot. Yet I was also observing and learning during the whole process… I noticed that if I concentrated on the joy I felt inside, I didn’t notice the pain as much; if I saw the situation with an objective mind and calm feeling (I was mentally and inwardly paraphrasing Yogananda: “pain cannot make my condition any worse, nor lack of thereof any better”), the pain was still there, but it just didn’t bother me at all because I knew it was meaningless; if I concentrated in the center of the pain, I would feel it more intensely for a few moments, but then it lost reality because I could feel myself not being the body.

All of these states of mind came to me alternatively and then left when my concentration or my willpower wavered, only to come back again when I reapplied the above principles. It was quite an experience, and it played its role on teaching me the ongoing lesson that physical pain is nothing to be afraid of.

I had a beautiful meditation later on, which served to crown a day that was generally marked as being very blissful, in spite (or perhaps because of?) the bodily pain. I’ve heard swamiji say before something along the lines of pain being very close to bliss. In my experience, the extra effort I put into having a good meditation in spite of the pain, actually propels me deeper than usual; the same principle applied to other spiritual practices all day long makes for a great boon to my inner joy, thanks to the pain! 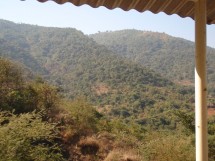 With a scenery like this, pain is easily forgotten!

Now, one wonders: what kind of karma did I have to have such an accident? Did the minor injuries I contracted, thanks to guru’s grace, satisfied the karma of a much serious accident I might have had otherwise? With those things, one never knows! So, it works in every case to be grateful for what happened, because when one knows God is taking care of his life, then it makes no sense to brood over a helpful lesson and possibly a major karma burner! My own feelings when I was riding the truck back to the community, fresh from the accident, were of gratefulness. I was mentally praying to Divine Mother, thanking her for the experience in general, and for “being done with it” in particular, but mostly for the joy I was feeling, which let me know it was all arranged for my greater good.

To go back to the previous question: what kind of karma did I have to have such an accident? A worldly person might say “bad” right away, but from a devotee’s perspective, that’s not it. Swamiji has taught us that situations are neutral, and so is karma, being only the “action and reaction” principle applied to our lives. The only true measure to determine whether a karma is good or bad is this: Does it lead you closer to freedom in God, or does it lead you to greater bondage in delusion?

In this case the answer is clear: I must have had very, very VERY good karma to have this bike accident!