Earlier this year I had the opportunity to travel to Mexico and Venezuela to lead Kriya Yoga initiations. Even though it’s a struggle to communicate due to my lack of Spanish (fortunately, I had a very good translator!), there is a lingua franca (common language) shared by sincere Kriya Yogis — the language of divine joy.

When we live for God, and regularly practice meditation and Kriya Yoga, we naturally grow into what the yogis describe as our true nature: “Satchitananda,” ever-existing, ever-conscious, ever new bliss.

In Lazaro Cardenas, Mexico, we stayed at the brand “new” Ananda ashram begun by our dear friend Medardo (see his blog post about the ashram, Building Ananda in Mexico). It is an extraordinary testimony to the creativity and will of the devotees there, that they made a beautiful ashram out of a ruined and abandoned building — one which had graffiti on all the walls inside and out, and a foot of waste on all the floors!

We were given a wonderful opportunity to experience divine cooperation and joy. There were about twenty of us staying there as part of our Kriya retreat. We shared two bathrooms that didn’t have doors yet. The flimsy curtains covering the doorways were frequently blown aside with the breeze, sometimes at very inconvenient moments!

There was no dimming of anyone’s joy — it only increased throughout the retreat. A group of us were talking on the last day, and one of the new Kriyabans received a phone call, which reduced him to tears. At first concerned that there was a tragedy in his family, we eventually learned he had just found out that he won a money lottery at the factory where he worked.

He had prayed to Babaji for help in winning it, with the intention of paying for bathroom doors for the new ashram! Praying for winning a lottery is typically not recommended, but we were all utterly charmed by the man’s simple devotion and sincerity. Our joy turned to laughter when someone suggested that Babaji must have earnestly wanted those bathroom doors installed in the ashram! It’s obvious that the Ananda Ashram will grow into a beautiful home for the Kriya Yogis in Lazaro Cardenas.

In Venezuela we had a delightful and inspiring meeting with Blanca, a 95-year old Kriya Yogi who received Kriya over fifty years ago from Senor Cuaron, a direct disciple of Paramhansa Yogananda.

Blanca has continued her Kriya practice and devotion to Yogananda all these years, with very little support from other disciples. The divine joy in her eyes and overall demeanor were a powerful testimonial to the benefits of Kriya, and steadfast discipleship to Yogananda.

Blanca’s parents were also Kriya Yogis, as well as Blanca’s daughter Nancy, who recounted a very interesting story about the birth of her own child. 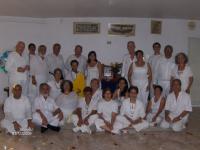 A friend of Nancy’s was visiting India while Nancy was expecting a child. Her friend met a Swami there who, in so many words said, “You have a friend back home who is about to have a child. This child is the soul of my former disciple Ganesh. Your friend’s child will be a boy, and will be born on such-and-such date and hour. Ganesh and I won’t be together in this lifetime, but we will see each other next lifetime.”

When Nancy heard this, she had difficulty believing it because the birth date given by the Swami would mean a a premature birth by many weeks. But, sure enough, a boy was born on the very date and hour predicted by the Swami, and Nancy named her son Ganesh.

When he was six years old, Ganesh wrote to the Swami in India. The letter was returned, with a note that the Swami had just passed away. Certainly a strange story! And a beautiful confirmation of reincarnation and the eternal nature of the Guru-Disciple relationship.

During our trip we not only had the opportunity to meet Ganesh, now an adult, but to perform a baptism for his young son. Now five generations of that one family in Venezuela are blessed by the teachings of India and Kriya Yoga!

I would like to thank everyone who donates so generously to help spread the teachings of Kriya Yoga throughout the world. There are many, many souls who are receiving the blessings of Kriya, and the divine friendship and support that we could not otherwise share.

Finally, I would like to share a wonderful practice suggested by Paramhansa Yogananda. He once told some disciples, “Memorize my poem ‘Samadhi,’ and repeat it daily. It will help to awaken within you that lost memory of what you are in reality: sons of Infinity.”

During a weekly three-hour men’s Kriya meditation at Ananda Village, we listen to a recording of Swami Kriyananda reading the poem.

If you can’t memorize or read the entire poem every day, you can learn one line that Yogananda repeats over and over in a talk he gave one Christmas day. It describes and helps us affirm our own true nature. Try repeating the following line in your meditation, as you go to sleep, and during other times: