A Beautiful Farm near Half Moon Bay 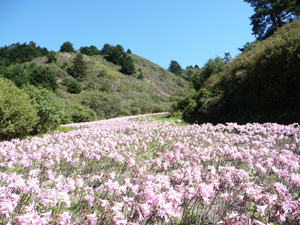 When Swamiji passed into the Infinite, it was as if an enormous wave of energy was released. As his body declined with the passing years, his consciousness expanded, until the body was simply too confining to hold it. For him it was a joyous release.

And once freed, Swamiji became able, so it seems, to be with all of us everywhere even more.

In Palo Alto, that sudden increase of energy flowing from a higher source has taken a very specific, and somewhat surprising form: the acquisition of a farm in Half Moon Bay. It could not have happened without Swamiji’s help, encouragement, and apparently fundraising skills.

In six weeks we raised $1.8 million dollars. Yes, that is the right time frame and the right amount of money. As you all know, we are not wealthy people. But we are dedicated. It was thrilling to see how much we can do when we work together for God. As it rapidly unfolded, we often joked that it was as if Swamiji, from the other side, was pushing money across to us!

What we have bought is a working commercial farm, now called Ananda Valley Farm. It’s two miles in from the ocean, just outside Half Moon Bay. Because it is so close to the coast, you can grow all year.

See  beautiful collection of photos taken at the Dedication on October 5, 2013

Even though you are literally just 10 minutes from a good cappuccino, when you are in Ananda Valley you feel as if you are miles from any other habitation. And it is only 40 minutes from our Temple and community.

Some of the 67 acres goes up the brush-lined hills, but there are still about 25 acres of first-class farmland. There is also plenty of water—two wells, a creek, and an ever-flowing spring that comes out of granite rock, pure and drinkable.

The property comes with some housing for farmworkers, quite a bit of barn/storage space, loads of equipment, three giant greenhouses, an irrigation pond — everything you could imagine to run a commercial farm.

The land was dedicated in a ceremony on Saturday, October 5, 2013. David and Asha spoke, sharing the story of our farm up to the current moment, and we also heard from our official farm staff members Biraj, Lahari, and Warren. James, our realtor, shared how he’d felt Swamiji’s presence “whispering from the trees” to him, all throughout the process of buying the property. And we were honored to meet Caín, the foreman who has lived and worked on this land for 39 years, and is now taking on the new challenge of teaching us all how to be farmers. A potentially daunting task, but one he’s facing with admirably good humor.

To bless the land, everyone received an envelope containing small items to distribute or bury around the property as we roamed and chanted for half an hour. We had pictures of Swamiji and the Masters, small ziplocs of Ganges water, tiny stones from Babaji’s cave in the Himalayas, and packets of soil from Crystal Hermitage. Asha had kept a large container of the finely sifted Crystal Hermitage soil for a long time, ever since someone gave it to Swamiji many years ago, and had just been waiting to see what its ultimate purpose would be. This was perfect.

To end, we gathered in a central area for a fire ceremony, and then closed by singing Channels, Swamiji’s song of gratitude to Divine Mother and to Her presence as expressed through all the infinite, joyful variety of creation. And a song of opening ourselves, as well, to be Her channels. It was a beautifully uplifting occasion, and the feeling of the day was that Ananda Valley Farm had clearly and unmistakably been launched on its Divine mission. Appropriately, Asha commented that the day’s photos are the first we’ve had that truly do justice to the land.

Mother, we thank you,
Your joy shines in ev’rything!
Open these channels
That the world once more may sing.