When I was a senior with Ananda Living Wisdom High School, we took our annual “Service Adventure” trip to Quebec and the east coast of the United States. Our first scheduled stop was to spend one week at an intentional community in Quebec called “Cite Ecologique.” To put it lightly, I was not enthused about traveling to what I imagined to be a hippie Canadian commune in a cold, abandoned, and middle-of-nowhere area of Quebec – in January, no less. I managed to bite the bullet and convinced myself that one week would pass quickly enough before we could visit Boston, Washington D.C., and other potential highlights of our trip (all of which, I’m certain, just coincidentally happened to be located in the U.S.).

When our group of six students (ninth-twelfth grade) and two teachers arrived in Cite Ecologique and began to meet the members of Cite Ecologique, I was awestruck. I felt like I was meeting long-lost friends, not strangers. Here was a group of people, just like those in Ananda, who were dedicating their lives to working together in a community environment for a higher cause. Whether their educational principles, spiritual background, creative abilities through businesses and original enterprises – all of it was strikingly similar and deeply resonated with what I had experienced growing up in Ananda. These people were instant family to me.

After one week, we returned to the U.S. and spent a short amount of time in Cite Ecologique’s community branch in Colebrook, New Hampshire. Upon our arrival (and the return of U.S. cell service), I immediately called my parents. “I know what I want to do with my life!” I exclaimed; “I want to be an ambassador for the communities movement.” One week visiting Cite Ecologique provided all the inspiration I needed to know that there was something with communities, their creation and connection, I felt called to do.

This inspiration is, in part, what led me back to Ananda for this summer internship experience. A “communities ambassador” isn’t exactly a career option one can find on Monster.com. Still, with each available opportunity, I have tried to learn more about Cite Ecologique, Ananda, and the history, structure, management, and daily operations of other communities. Since my trip to Cite Ecologique in my senior year of high school, the thought of helping connect and spread intentional communities very much appealed to me.

Imagine my delighted surprise when, looking through Ananda Village’s original master plan compiled in 1976, I saw these statements outlined in the “Goals” section for the community:

C. Creating an Institute of Cooperative Spiritual Living for the study and experimental practice of cooperative and spiritual ideas;

D. Helping other people to develop communities similar to our own;

E. Developing a communications network with other communities for the exchange of information, skills, goods, and services.

How wonderful it is to be reassured of an idea that was actually planted in the ether many years ago! The intention of connecting with existing intentional communities and helping others start their own communities has been with Ananda for quite some time, but is yet to fully manifest. Interestingly enough, of the fifteen goals and sub-goals listed for Ananda in the ’76 master plan, the three listed above are the only ones that have not come to tangible fruition. Ananda College and Ananda’s Meditation Retreat have incorporated some of these goals over the years, but not quite in the manner that they were mentioned in the master plan.

The Institute of Cooperative Spiritual Living was summarized as follows in the ’76 master plan:

The Institute of Cooperative Spiritual Living will be designed as an educational institute in community development and rural living skills. We will include classes in community organization, government, economics, social planning, organic gardening, animal husbandry, and carpentry.

The Institute was to focus on students gaining firsthand community experience by living and working in Ananda Village, while also learning details about design and planning, alternative infrastructure and energy systems, and other topics primarily as they pertained to communities. Perhaps a program such as this could be further incorporated into the curriculum offered by Ananda College in Laurelwood, Oregon, where the latest Ananda community development is well underway.

The early planning details of Ananda Village, included in the original master plan, are a helpful tool to gain an insight into what Kriyananda and early members envisioned in terms of community practicalities and ideals. Outreach and networking with existing intentional communities, as well as helping others start similar communities, was a central component of Kriyananda’s vision for Ananda’s work. 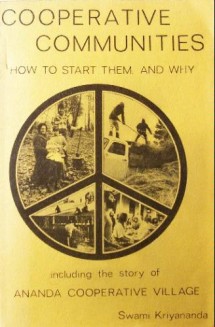 Kriyananda’s fervor for working with other communities was largely unreciprocated throughout his life. His two books (out of over 140 published) specifically focusing on communities, Intentional Communities: How to Start Them and Why and Cities of Light, were among his slowest selling books. For reasons on which anyone can speculate, Kriyananda’s (and Ananda’s) outreach to other communities did not see much in the way of notable or lasting success.

Incidentally, in the summer of 2010 Kriyananda met with Michael Deunov, the founder of Cite Ecologique, and the two had an instantaneous connection; one might even say that they were reunited spiritual brothers. This meeting, and the continuing connections with Cite Ecologique, may have marked a shift in what seemed to be a laggard among Kriyananda’s original goals with Ananda.

Intentional communities of all backgrounds can easily begin engaging in mutual cooperation by exchanging ideas, resources, and other specialties. Ananda and Cite Ecologique, within four years of first developing a connection, have continued to build an exchange program among the respective schools of each community, with other areas for exchange being explored. By starting small and building relationships with just one or two communities initially, as is currently happening with Cite Ecologique, Ananda can begin to engage in meaningful networking and cultivation of intentional communities around the world, realizing the final component of Kriyananda’s original vision for Ananda.  Forty years later, perhaps the time for communities collaboration truly is now.