The city of Frederick reclines in the rolling hills of central Maryland as it has since before the days of the Civil War. It is from this charming, quiet city that I began my adventure to the woods of northern Massachusetts for my first Kriya initiation.This journey starts, as many Ananda journeys have started, with a reading of Autobiography of a Yogi. This book was the very first book I downloaded into one of the very first Amazon Kindle e-readers available to the general public. The reading of this amazing book led to an email acquaintance with Nayaswami Devarshi in the Ananda Kriya ministry.

What followed over the next year were lots of questions, Energization Exercises, meditations, chanting, more questions, lots of reading, a Discipleship ceremony, and finally: approval to participate in the Ananda Kriya initiation to be held at the Rolling Ridge Retreat Center in North Andover, MA in early May of 2010.

In the spirit of Autobiography of a Yogi, and with the understanding that I may never journey to the Himalayas, I decided to make this trip an adventure and chose a challenging, road-less-travelled path to the Rolling Ridge Retreat Center at North Andover. 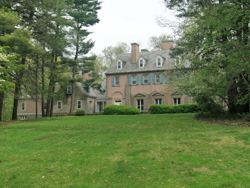 The Retreat sits on 38 acres of wooded land, and serves as a religious retreat and conference center for people seeking to renew their faith in a quiet, elegant monastic setting.

Could there be a better place to host a Kriya initiation retreat?

I arrived early to the event and was able to set my bag down and explore the grounds before the day’s first activities began.

Late April covers Rolling Ridge with a lush spring quilt of leaves, grass, pine cones, and moss. The curious explorer, if he looks long enough, will find an old stonework fountain, walking trails to the lake, a peace pole, and a ‘meditative labyrinth’ with which to walk through. 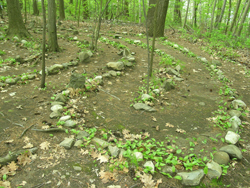 As serene as the grounds may be; however, the real showcase of the estate are the main houses where we eat, sleep, and commune. After a half century of religious retreats the energy of the campus is reflective, restorative, meditative, and timeless.

I imagine that if I listened long enough I would hear a quite voice on the wind saying, “I have something for you, something that your Father left for you in my care. Safe it has been waiting until you were ready. I am filled with happiness to finally share it with you.”

The other Ananda guests soon began to arrive, and we busied ourselves with registration details and checking in to our rooms. The men were on the top floor, in rooms hidden by all the nooks and crannies a proud New England estate could provide. From below us on the main floor I hear ringing bells. The time for sightseeing has come to an end. The Kriya retreat is officially under way!

Afternoon sadhana (spiritual practice) brought everybody to the main courtyard where, as a group, we practiced our Energization Exercises and yoga.

Exercising in the courtyard

Balancing on one foot with arms and legs in all different directions is hard enough and the challenge of cobblestones in the courtyard made windmills out of a few of us. After yoga we filed back into the building and into the temple room for chanting and meditation.

During this time I saw Nayaswami Jaya and Sadhana Devi, long-time Ananda ministers who lead the retreat, for the first time. What a wonderful couple. I was unable to make an introduction as the group broke off for our first dinner; however, I was fortunate enough to sit next to Jaya at the dinner table.

Humorously, after a couple of false starts in our conversation he was able to gauge the depth of my exposure to Ananda. To his amusement, he spent several patient minutes explaining to me the proper way to pronounce the names of our Gurus that I had been reading about over the last year.

After dinner we returned to the temple and the company of many, many Ananda friends. Over the remainder of the evening I met people from Maine, New Hampshire, Massachusetts, Rhode Island, North Carolina, Oregon, and California.

I spent quality time with one of them late into the evening, learning about how Ananda meditation groups come together. And then, unrelated to anything we were discussing, he said, “God is the joy we experience in meditation.”

That was odd. Late at night and alone in the dining hall, he dropped this profound statement, then moved on to another topic without even a break in cadence.

Rolling with it, I rolled the sentence over and over again in my head and wondered how a year’s worth of study and meditation could be compressed into a single phrase and still have room to stretch in my mind. This must be the Ananda way.

The next morning started with a group meditation at 5:30 am, and I have to say that I wasn’t expecting anything quite so early. In no mood to miss anything this weekend, I made the extra effort and was “awake and ready.”

Breakfast was waiting for us after several hours of meditation, exercises, yoga, and chanting, and there were many healthy appetites to attend to. After breakfast and an hour of free time we gathered again in the temple room for a class on Kriya Yoga.

Nayaswami Jaya gave the best introduction to Kriya I have ever heard. I find yoga a difficult topic to introduce to new people, there are so many ideas wrapped in so many new vocabulary words that it is easy to get lost, and lose the attention of those I am speaking with.
As Jaya spoke, simply but with  eloquence, he said, “Yoga is the science of happiness.”

There, it happened again! Right in the middle of Jaya’s talk, another profound sentence of great weight and simplicity. I am beginning to wonder if Ananda brings something to yoga, and not the other way around.

If all of the words from Yogananda’s and Kriyananda’s books that are shelved in my brain fell out, leaving only “God is the joy we experience in meditation,” and “Yoga is the science of happiness,” I would be understood by all.

After the Kriya class and a short meditation we gathered in the lunch room for the final meal before the Kriya initiation.

What can I say about Kriya initiation that hasn’t been said or experienced by thousands before me?

Figuratively, I felt a lifetime of experiences recede into a column of light and grace.

Silence followed us into dinner after our Kriya initiation. We ate, we reflected, we retired to our beds.

The next day started with the sound of a strolling kirtan (devotional chanting) greeting us with a 6:30 wake-up call. The new Kriyabans (Kriya Yoga initiates) gathered for a review of all we had learned the night before, followed by breakfast.

Next came the Purification Ceremony (part of the weekly Ananda Sunday Service) and the Service. It was wonderful, there were so many happy people there, and blessings flew back and forth throughout. I cannot say too much good about how well Ananda can sing. The choir during the Sunday service was perfect, and for all the claims I heard about not practicing enough, I am not sure how much better they could have been.

The weekend was coming to a close and I made my preparations to return to my home in Frederick. I met so many good people on this weekend retreat; I don’t know how to acknowledge them all.

If any of you are reading this, thank you, thank you, and thank you again. It was a great pleasure to meet all of you. I look forward to meeting all of you again soon. I want to extend a special thank you to Nayaswami Jaya and Sadhana Devi for their dedication to this work and participation in this event.

I also must extend an equally special thank you to Tracy Anderson who hosted a flawless retreat.

About the Author
Patrick Mullin