Editor’s note (2019): the center and retreat at Laurelwood has moved out of the hands of Ananda after many years. We wish it the best in the next phase of its life!

Ananda Portland recently purchased a former Seventh-Day Adventist Academy. The academy buildings sit on 55 acres of rolling hills 30 minutes west of the city of Portland. The setting is rural, but not isolated – the school once housed, fed and educated hundreds of students and was the heart of life in the valley. A few rooms were used by a small mission college when the academy closed, and maintenance of the buildings continued in an effort to keep decay from having the upper hand, but those activities were not enough to keep the energy “awake and ready” as we say at Ananda. The property went to sleep while life went on in the valley and traffic rolled by on the highway in front of the administration building.

When I first saw the site it was a cold, damp, grey November day. As we walked through the old dormitories, it felt a bit eerie, and the damaged, neglected rooms littered with debris and leftover bits from years gone were stale and lifeless. However, when I stepped outside and looked across the rolling lawn and saw the trees and the gardens, I sensed the divine energy waiting to move and expand again.

The small group that took up residence after we took possession of the property on May 4th were full of enthusiasm and took on the daunting job of cleaning, repairing, painting and awakening the consciousness sleeping under the surface.

After a few weeks of work, we invited our Ananda Portland family to come to a potluck and get a closer look at the new venture. The weather allowed for outdoor eating so we pulled tables out of the as-yet-unused cafeteria and set up lunch huddled close to the buildings where the residents were living and the life energy was the strongest. We enjoyed the view and toured the grounds and exclaimed over the changes that had already been made. I could feel the devas singing among the spring flowers – so happy to be awakened to joyful Ananda laughter. 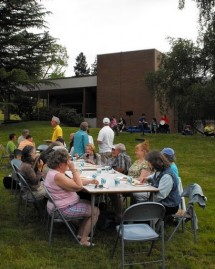 The work continued – and the daily meditations. As the mower worked on the enthusiastic spring grass and the rooms woke up to golden yellow walls and the pipes flowed with crystal clear spring water, and Yogananda’s picture found its way into every corner, the meditators gently touched the resting consciousness of Laurelwood with divine friendship and encouragement.

Extra energy was put forth to prepare for another potluck – this time the invitation went out to the surrounding community and those who remembered the academy in its previous incarnation as a school. Everything was scrubbed and the grounds were trimmed and lovingly beautified. The day was warm and the tables were set up outside. As I drove up I was thrilled to see the tables stretched out across the lawn down near the road – the Ananda energy had now expanded across the campus and I felt I was pulling into any one of Ananda colonies around the world – awake and ready! 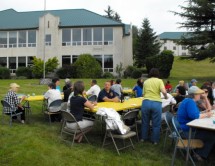 On the lawn at Ananda Laurelwood

We had a joyful afternoon, with food, Swami Kriyananda’s music, and volleyball. I watched the young people and old people share in the adventure of this new expression of Ananda, and I could sense the joyful divine energy that flowed through the campus and the buildings for generations. Since 1904 the site had been dedicated to spiritual education, worship, prayer and divine fellowship – Divine Mother was holding it for us so all that inspiration and devotion could find expression again. 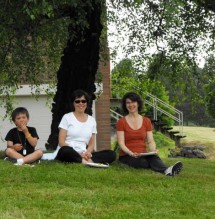 As I looked back on the day I reflected that the process I see playing out at Laurelwood is very much like our own inner awakening as we find our spiritual path. There is so many old habits and forgotten debris to clear out of the way, it’s overwhelming. But as the energy moves in the right direction, our inner nature supports our efforts and progress is slowly made. We have to rejoice and celebrate every victory as we reclaim the light of our true nature. Laurelwood is a long term venture – there are rooms that won’t get touched for years, but the awakening has begun.

About the Author
Lorna Knox