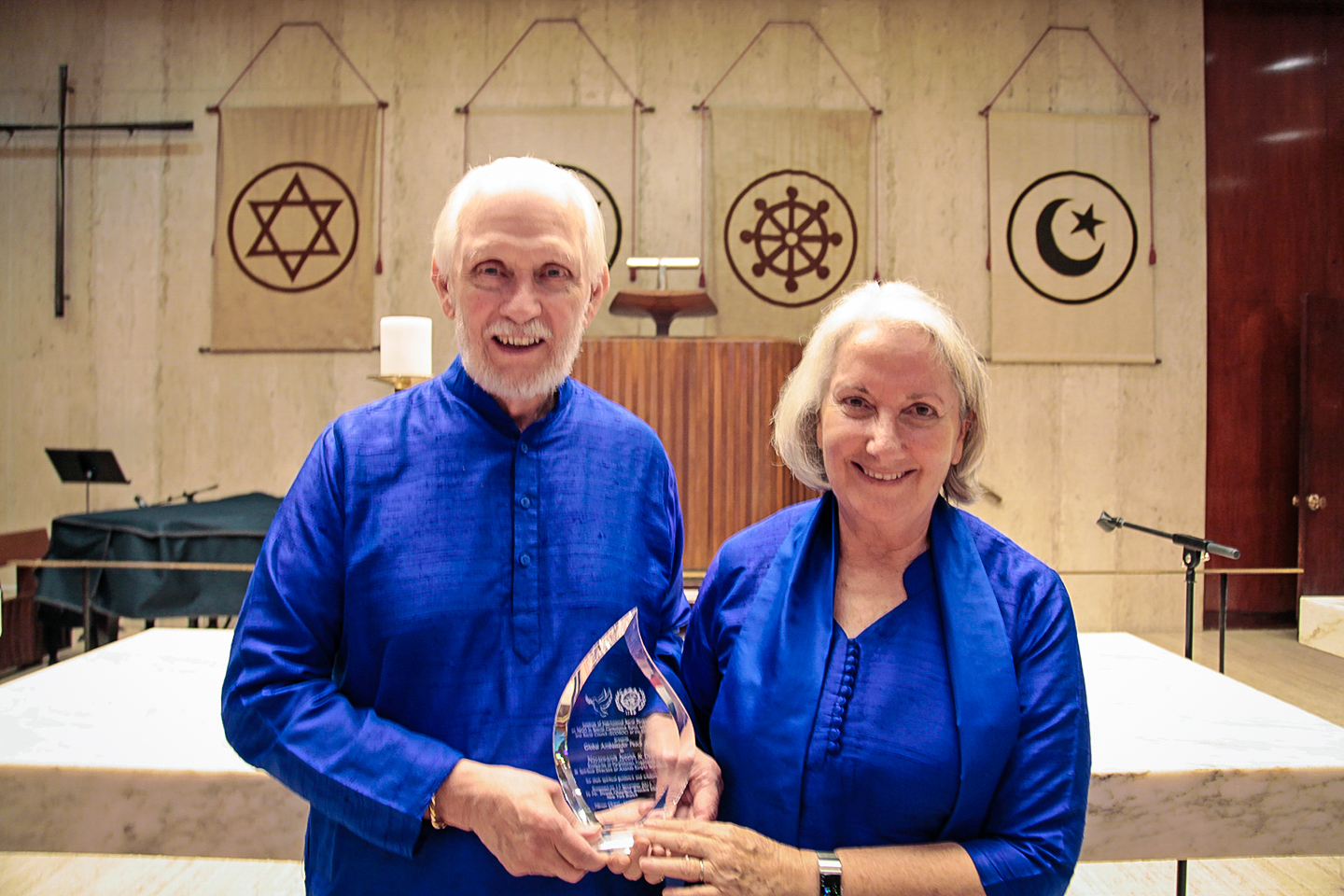 Ananda receives Global Ambassador Peace Award from the Institute of International Social Development (IISD), an international non-governmental organization (NGO) in special consultative status with the Economic and Social Council at the United Nations.

The Spiritual Directors of Ananda, Nayaswami Jyotish and Nayaswami Devi, received the award on November 17, 2017 in the Tillman Chapel at the United Nations Church Center in New York City.

“Institute of International Social Development recognizes spiritual leaders and the UN leadership which we believe can transform the world,” said Shomik Chaudhuri, President of IISD. “There are very few leaders like Jyotish and Devi. We are honored to give them the Global Ambassador Peace Award for the inspiring ways Ananda brings Paramhansa Yogananda’s spiritual wisdom to life today.”

“Yogananda’s mission,” explained Nayaswami Jyotish, “was to spread the teachings of meditation and Kriya Yoga as tools for the evolution of personal and planetary consciousness. He came to show how everyone can use meditation to enhance their daily life.”

“Reading Yogananda’s ‘Prayer for a United World’ at the United Nations today was a great honor,” said Nayaswami Devi. 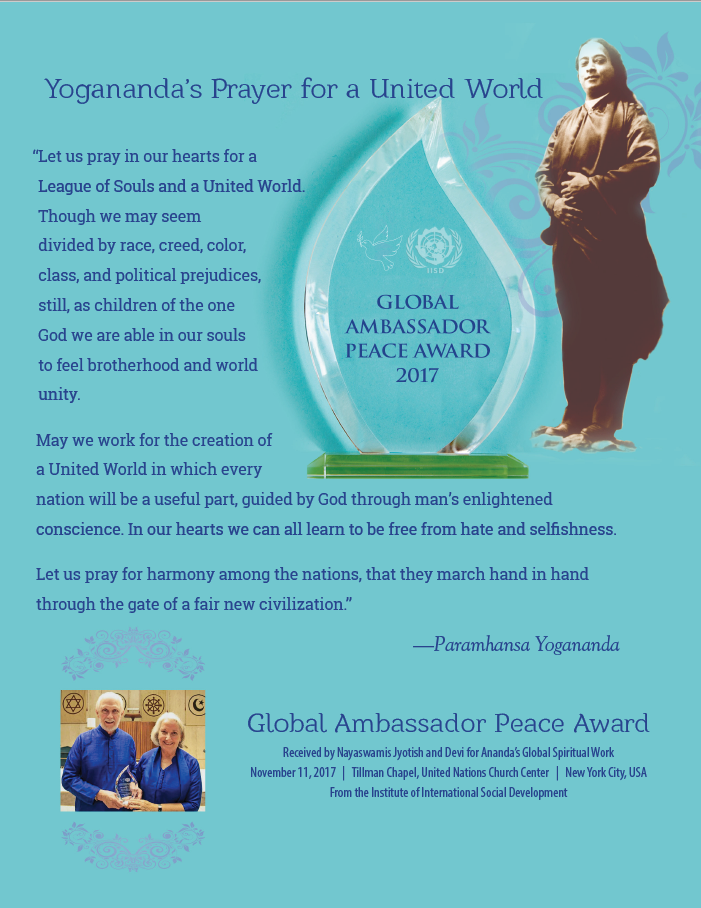 In response to the great uncertainty people are feeling today, Ananda founded Be the Change. Already close to 2,300 people in 70 countries have pledged their meditation minutes to radiate a million hours of peace and harmony to the world.

“Be the Change gives people a positive action—meditation—to help them transcend their fears and anger about the state of our world,” explained Nayaswami Jyotish.

“We all need to take personal responsibility for the state of our world today. Our challenges are precious spiritual opportunities,” said Nayaswami Devi. “Meditation raises our consciousness,” she added. “Only with an uplifted consciousness will we achieve sustainable living and harmony on our planet. Meditation is how we can be the change we wish to see in the world.”

In direct service, Ananda brings “dignity and divinity” to more than 4,000 widows abandoned in the holy city of Vrindavan, India, giving them safe housing, food, clothing, medical care, and personal care for each woman.

“It’s not enough to just provide basic needs,” said Nayaswami Jyotish. “People need someone who cares for them, and loves them. Our service to the widows restores their dignity and divinity.”

Founded in 1969, Ananda has grown into a spiritual movement of 140,000 people worldwide living the change they want to see in the world. It includes 8 cooperative, spiritual communities; 5 retreat centers; 5 schools (nonsectarian, pre-K through high school); 3 organic farms; an award-winning health clinic; 3 publishing houses; over 145 meditation groups and teaching centers, online and in 28 countries; as well as the Paramhansa Yogananda Public Charitable Trust.

“Living in an Ananda community is living yoga in every aspect of daily life,” said Nayaswami Jyotish.

The original Ananda Village continues today as a private, non-profit, spiritual community of about 250 people on 700 acres near Nevada City, CA. This year Nevada County approved a master plan for Ananda Village to build another 100 homes over the next 25 years. Founded by Ananda members, the Sierra Family Medical Clinic provides primary medical care for over 5,000 residents of the surrounding rural communities.

Each April over 7,000 people visit Ananda Village to experience the color and joy of 19,000 tulips in bloom at Crystal Hermitage Gardens, a VIA Magazine “Gorgeous Garden of the West.” Thousands travel to the Expanding Light Retreat for yoga and meditation teacher training, and personal retreats.

The teachings of Paramhansa Yogananda, author of the spiritual classic, Autobiography of a Yogi, guide Ananda’s world service. In 1920, Yogananda came to the United States to address a conference of religious liberals in Boston, MA.  He met US President Calvin Coolidge in the White House. The Los Angeles Times wrote “Thousands being turned away from the 3,000-seat Philharmonic Auditorium…Swami Yogananda is the attraction.”

“You would be hard-pressed to find anyone on the spiritual path whose life has not been influenced by this profound work of literature; it started me on a path of yoga, meditation, and self-exploration,” said Jack Canfield, author of Chicken Soup for the Soul.

Nayaswami Jyotish and Nayaswami Devi trained with Ananda’s founder, Swami Kriyananda (a direct disciple of Yogananda), for nearly 50 years. As emissaries of Yogananda today, Jyotish and Devi travel the world sharing the practical and heart-opening path of Kriya Yoga. 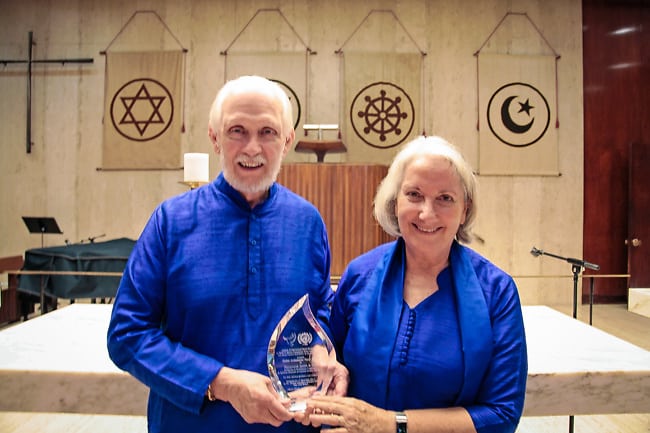 Prayer for a United World

Let us pray in our hearts for a League of Souls and a United World.

Though we may seem divided by race, creed, color, class, and political prejudices, still, as children of the one God we are able in our souls to feel brotherhood and world unity.

May we work for the creation of a United World in which every nation will be a useful part, guided by God through man’s enlightened conscience.

In our hearts we can all learn to be free from hate and selfishness.

Let us pray for harmony among the nations, that they march hand in hand through the gate of a fair new civilization.

For more information or an interview, please contact pr@ananda.org.

About the Author
Radhika Cosley