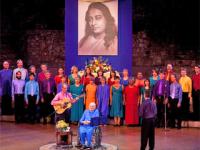 As many of you may know, Swami Kriyananda, now 84, has had some recent physical setbacks, including a visit to the emergency room last Tuesday after a fall that injured his hip. He was scheduled to be at a tea in Los Angeles on Saturday, and was heartbroken to cancel for the first time in his life an appearance of such magnitude. He didn’t even know if he would be able to make it to his publicized talk on Sunday at the Ford Amphitheater. On Sunday morning we were overjoyed to hear the news that he was miraculously on his way, either by the Grace of God, a Herculean exertion of will power, or a combination of both. I wasn’t sure in what condition he would arrive after what must have been a painful trip. However, he entered the Ford Amphitheater with great energy, and was greeted with much joy by all who were already seated in the amphitheater (his path to the backstage area was visible to all). The pictures you see of his talk at the Ford Amphitheater mark his first ever appearance in a wheelchair.

Divine Mother gave him a grand entrance, coinciding perfectly with a musical climax halfway through our preshow performance of Life Is a Quest for Joy. The next 10 minutes of the piece were some of the most special I’ve ever played. It was as if his presence fueled a spark within me, granting me the boon of tangibly feeling God’s loving presence expanding from my heart.

Having been a performer for the past 25 years, I’ve been backstage with celebrities such as Elizabeth Taylor, Judy Collins, Julian Lennon, Ringo Starr, and Elton John, and have often seen inconsistencies with their public personas, ranging from peaceful to exuberant, dull to vulgar.

As I walked backstage last Sunday after finishing our piece, I saw Swamiji ready to go. No trace of his recent ordeal showed on his face, as he radiated joy, enthusiasm, love, and a deep sense of peace. I was simply stunned – this was no facade, as there were just a handful of us in his presence, quietly waiting.

There comes a deep joy in life when you recognize someone not necessarily for their relationship to you (a wife, a friend, a son or daughter), but for what they have brought to your life. Unlike others, I have not been in the position to be close personally to Swami Kriyananda. In fact, one day years ago I decided to try to feel towards him as I would a dear personal loved one. An hour later I passed him in the Crystal Hermitage, and I silently reached out to him with that personal kind of energy. I was amazed at how completely limiting it felt, trying to relate to him only on a superficial (egoic) level. I realized finally that I needed to go much deeper, and since then have deepened my attunement with him not by any outward relationship, but by tuning into his vibration and inspiration, especially through music. Since then, numerous times I’ve been overwhelmed at how empty my life would be without his teaching, his attunement with Yogananda, his music, and his incredible example of living for God.

For those few moments before he went onstage, I saw him not for my personal friend, or a celebrity, or even the founder of Ananda. What was overwhelmingly evident to me was a disciple’s great joy and devotion in serving his Guru – it is all he lives for now. It shone through his eyes, his face, with a force that could be tangibly felt.

I went back onstage to conduct the choir, and as we ended our set with his song Dark Eyes, you may be wondering why I was hardly moving my arms. I could once again feel that same presence of the power of love, coming from our singing, and was trying to expand that bubble of inspiration to fill the amphitheater. Could any of you feel it, I wonder?

During his talk, I sat downstairs with the choir in the green room and listened. Over the PA system I could hear his heartfelt emotion as he spoke of the beginning of his journey to live for God alone. I continued to dive deep into his vibration, not noticing how well he was articulating his words, or where his talk may be going from one thought to another. I was simply overjoyed that he had made the trip, and was here to serve all those awaiting his presence.

At the end of the show, we came back onstage to sing Peace with him, and despite his evident fatigue, still chose to sing with us, with surprising vigor. As the audience sang the final “Amen” with us, the amphitheater was vibrantly resonating with a Divine Presence that could not but open wide that hardest of hearts.

After he was taken backstage, he remained in that uplifted bliss, radiating joy as he blessed Neale Donald Walsch and his wife and a few others before leaving for his new home in Los Angeles. I know in his heart of hearts he couldn’t help but feel Yogananda’s blessings from all the energy it took to make “The Miracle Show” (as Sean has been dubbing it) the great success that it was.

Thank you Swamiji, for your continued example of a life lived completely for God, no matter what the cost.