Surrounded by a lovely, expansive garden, willow branches swaying in the breeze and brushing against the water of a large shallow pond just behind us, we watched the couple approach. Both American, they had met while attending College in Delhi, India. The decorations were festive and Indian, and the couple, their attendents and family, had all graciously donned Indian dress. The mood was sacred as the couple approached separately, walking with great reverence that was both natural and deliberate.

Ananta and I were asked to preside over their marriage earlier this summer, the woman being the daughter of the owner of a yoga studio where we taught a meditation workshop. When we first met this couple we were instantly taken by the depth of their committment and how naturally they resonated with Yogananda’s teachings on Spritual Marriage. Wishing to share with them the vibration and spirit of the ceremony, we sang for them, acappella, the song, “Divine Friendship” by Nayaswami Kriyananda. It follows: “Dearest Friend, in the blend of your life’s path with mine, I have found love is crowned with freedom’s vine. Sorrows all disappear, when friendship’s gaze is clear. May our sight, shunning night, toward God incline.”

They were weeping and deeply moved. Because of their receptivity we were able to address the fundamental priciples of spritual marriage. For us to accept the responsibility of marrying them it was important that we feel their sincerity and a desire for a spiritually based marriage.

In many modern marriages there is little of honor and respect, what to speak of a deep understanding of the underlying purpose of marriage. “People come together,” Paramhansa Yogananda said, “attracted by a pretty shade of lipstick and a flashy bow tie.”

While all marriages in India are not perfect, traditionally, the man is taught to look upon the woman as the Divine Mother, and the woman to look upon the man as the Heavenly Father. Some might view this as an odd approach, or even awkward, but if our highest concern and respect is for our partner, that their soul flourish and be able to realize his/her highest aspirations, what a different relationship marriage could be. Imagine it. We look around and so oftentimes see the emphasis on personal fulfillment and the projection onto another of who and what they should be and become. If we, however, hold our partner in the highest light, they may in time, view themselves that way too.

It seemed deeply relevant that this couple met in India (it could have been any country really) away from all that is familiar in a certain sense. By their very circumstance they were challenged to be both expansive and inclusive. These, as well, are essential qualities of spiritual marriage. Our happiness must include the happiness of others. Our efforts must be not just for ourselves but for all who come into our lives. Whatever we are given of blessing, it is our responsibility and blessing to share that with others.

Following the ceremony, friends of the couple shared their deep appreciation to be a part of such a ceremony and to have explained for the first time in their hearing the meaning of marriage as a spiritual opportunity and as a path to expansion and freedom. One individual commented that she and her peers are taking a hard look at marriage and asking the questions, “Is this for me? What does this mean? Is this a valid step?” Their friends who were getting married that day were the first of their “group of friends” who were taking this step. It was very symbolic and refreshingly instructive and thought provoking. They were inspired by the maturity of this couple, their commitment, the vows they took, the goals for their marriage, their future, and their aspirations to be of service to humankind. It was a maturity that was exceptional and made them stand out.

I have always been awed through this simple and inspiring Ananda marriage ceremony to see people’s hearts and minds opened to eternal truths and understandings that make sense, are truely applicable, and transcend individual beliefs. Every path, every journey, has as its ultimate purpose, an expansion of consciousness, a transcendence of ego. Over the years we have performed many weddings and oftentimes find ourselves with a large body of people, other than the bride and groom, whom we do not know, nor necessarily share similar interests. Always, however, there are some who, as a consequence, are inspsired to seek a deeper meaning in their lives. A seed is planted. For this I am eternally grateful and assured that Grace can flow through all circumstances if we open ourselves to it and do it with God and for God.

In appreciation for all that is,
Nayaswami Maria 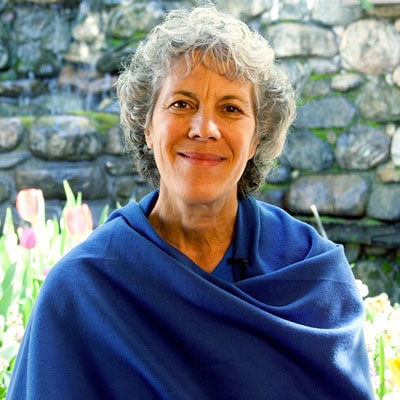 Nayaswami Maria came to Ananda in 1976 and served on the Ananda Organic Farm from 1976 through 1986. In 1979, she was married to Ananta in a ceremony performed by Swami Kriyananda. In 1986, Swami Kriyananda asked Maria and Ananta to direct and further develop the Ananda community in Sacramento, where they served for 23 years as ministers and spiritual directors. In 2009, Kriyananda asked them to return to Ananda Village.
Read more