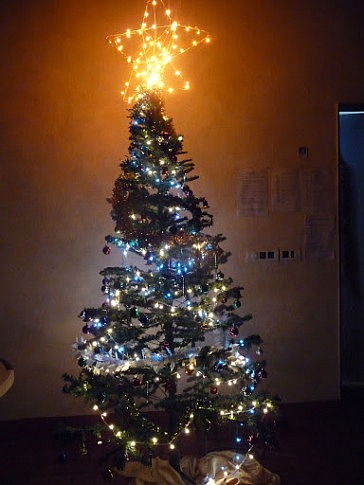 One day I was chatting with Swami Kriyananda’s nurse at Ananda Village and I was describing what I’ve done for the Village in terms of our Christmas Eve celebrations. I was hoping to inspire her to attempt the same when she returned to Pune India where Swami resided. She became very excited and suggested that I visit Pune to help that year with Christmas.

It is not in the Indian culture to celebrate Christmas. And although many Indians know who Christ is, he isn’t thought of by most as a guru. Swamiji was thrilled when Miriam suggested to him that I come over; I was also thrilled to receive the invitation. A long awaited desire to visit India was about to be fulfilled.

I felt as though I were on a mission of grace right from the beginning. I’d been in Seattle directing some scenes from Swamiji’s children’s story The Time Tunnel for the Seattle congregation. It was a well-attended event and included people from all over the country. My friend Dharmadevi was there from LA.

We spent little time together in Seattle, but I’d heard through the grapevine that she was planning a trip to India close to the time that I was. Literally in passing, I mentioned to her that I was going and that perhaps we should go together. She smiled and nodded “yes.”

The day I flew out of Seattle while waiting at the airport for my plane to take off, I went into Starbuck’s; low and behold there she stood. She was flying back to LA that day and both of us felt the synchronicity of our meeting as a sign that we should travel together.

We booked our flights through a travel agent and she was even given a free flight from LA to meet me in San Francisco. The trip was of course a delight except for the fact that I got ill, even before reaching India! I suppose you could call it Delhi-belly (a term for the digestive problems Americans often get when visiting India), but whatever it was it put me out of commission for the first three days of my landing in India.

They say that we work through a lot of karma when we travel to India. I think this is probably true. Neverthless, after my illness, I felt purified, lighter and ready for whatever was to come my way. 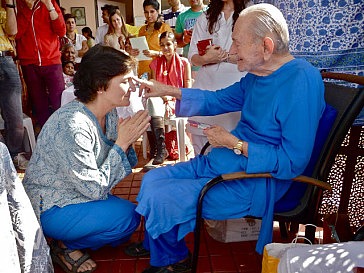 You find a way to synthesize your understanding of the teachings and how that translates into the culture that you are working with along with their understanding. And most important, you simplify.

Swamiji and his guru Paramhansa Yogananda taught that we don’t go to a country to Americanize or Indianize. Yogananda did not come to America to make us all Indians, he came to blend and synthesize East and West. He took the best of each culture, a combination of American ingenuity and productivity and the inwardness of Eastern spirituality.

We all have to find our own way. Events and spiritual ceremonies are so sacred to a culture that they must reflect who they are, not who you as a director are, or think they should be.

The Ananda land in Pune is beautiful, and vibrationally sacred. It is alive with God’s presence, even in these infant stages of the community. I was surrounded by devotees from all over the world. I felt safe and it was easy to feel a deep sense of the Divine presence.

There are a few little quirks. The food is different, but this was not a problem for me because I love Indian cuisine. At times you hear raucous chanting from neighboring towns, resulting from a wedding or some type of event. You are isolated from larger shopping areas and you walk a lot (so it’s best to have all that you need for the day when you leave home in the morning).

It’s wise to bring your shoes in for the night or they may not be there in the morning, and a flashlight is advisable so that you can see the little critters that may lie on your path at night. For the truth seeker, it is a haven of peace, full of interesting sounds and beautifully colored birds.

The land is guarded by Mamma, a stray dog of a breed that I’ve only seen in India. They are all over. The first morning we were there Dharmadevi and I went to sadhana. 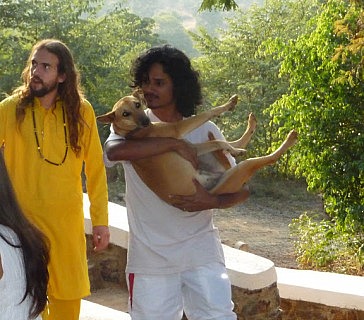 While we were walking to the temple, Mamma greeted us when we walked out the door (how do they know?), and walked us all the way to the temple. The whole time she barked at the possible hidden dangers in the bushes as if to show us she was taking care of us and that we need not worry. That was her job and she had it covered.

She was the happiest dog I’ve ever seen. She was well fed (Mamma, like many Ananda strays, is fed many times a day by both staff and visitors). She had a big property to frolic on and complete freedom to come and go as she pleased. There were a couple of stray dogs that would come by to play and they were her friends. However, if they got to close to the retreat (especially the dining area) or the guests she would send them on their way; there was no doubt that she was in charge.

On Mondays when the retreat was silent and everyone seemed to be secluding, even Mamma took a day of rest. She would be fast asleep on the trail to the temple. When Mamma was resting, not even a crane could move her; savasana at its finest!

Before I went to India, I thought I understood the driving. But no one who described it could ever give it justice. My best memory was sitting at a four way intersection for half an hour while everything was at a standstill. All traffic was trying to go at once. Finally a few gentlemen got out of their cars and directed everyone. What a dilemma that would have been in our culture. In India, everyone expects it and flows with it.

Day to day shopping in India is somewhat limited. You can find soap to bathe with, but the choices are limited and usually between two major American brands, Dial or Lifeboy. It’s difficult to find candles for your altar not to mention a candle light ceremony. But we did! The community is not set up for sewing costumes, so we had to get creative with draping the beautiful fabric found all throughout India and mixing brilliant color combinations.

Bramachari Aditya, our resident doctor, would often take us shopping. We would climb into a little blue car that could seat about six people. The ride to town was bumpy — I mean bumpy enough to throw you out of your seat if you weren’t holding on to something. 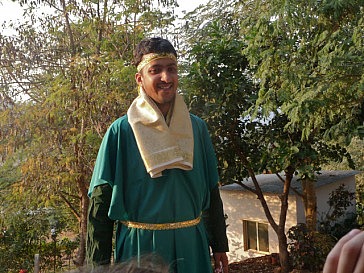 Aditya took me Christmas shopping for fabric and other props that we needed for our performance. We began at a local shop that I considered to be India’s version of a Walmart. The store was a little bigger than my living room and bathroom combined (which is approx. 60’x20’). Anything I asked for, the man behind the counter pulled off a shelf. Rubber bands, synthetic flowers, angel wings; no brands and the selection was very limited, but I was impressed! Aditya and I had fun.

Sadly I had to draw the line and assert my directors prerogative when Aditya wanted to buy a plastic saber for his role as a wise man. (This was just not my idea of proper attire for a wise man, no matter the culture.) But being the good natured fellow that he is, he easily acquiesced even though I know the little boy in him was disappointed.

Before I went to India I had written a very simple script for the evening. I cast our little production and it was complete with angels, Mary, Joseph and wise men. No part for Mamma however, she’d need to wait down below. Her cameo appearance (much to everyone’s surprise) for the Christmas concert seemed to bring enough joy and from a director’s perspective, a little “Too much joy!”

In writing the script, I primarily stayed with the basic storyline and of course we had Swamij’s beautiful music sung by a small choir which in vibration translates into any culture. Unfortunately, I had misplaced our precious taper candles for the ceremony so we had to substitute little tea lights. Tricky to light, but we had beautiful and adept angels lighting them, so we were okay.

Our performance took place in a lovely little amphitheater by Swamiji’s house. It was like performing in a “Temple of Trees” from Autobiography of a Yogi. There was tiered seating for the audience and the stage was leveled dirt. I loved it!

In the last years of his life, Swamiji became frailer, so we decided to have an angel walk to him so that he could light his candle from his seat. To our surprise he insisted that he walk to the area where everyone was posed in the traditional crèche. True to his style, he had an angel light his tiny candle on stage for him. His face was so innocent and childlike. It is one of the sweetest and fondest memories that I have of Swamiji. 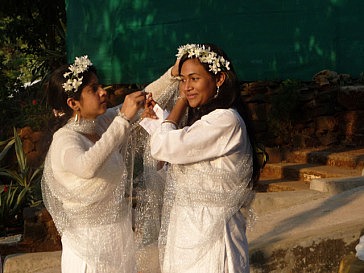 East Indians are wonderful actors! Directing them was a joy. They took direction easily and came from their hearts, as did the Italians and Americans that acted. The event lasted less than 45 minutes, once everyone had lit their candles.

After everyone had left the event, I and two of my friends sat in the vibration of the evening. The vibration lingered for a very long time, many hours. I have to say that after directing for several years what I consider deep spiritual events, I have never felt a vibration quite like this one. All three of us felt it.

It was not only deep and uplifting, but powerful, awe-inspiring actually. I literally felt as if Christ himself was there. I could only liken it to a similar vibration that I’d felt in Jerusalem many years ago, which was the power of Christ. But even this surpassed it. It was proof to me that Christ did live in the Himalayas at some point in time, and that he still visited, and was there that night.

About the Author
Nayaswami Devaki 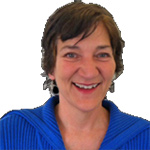