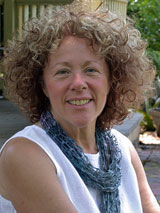 Dr. Shanti Rubenstone is a teacher and minister at Ananda Palo Alto in northern California.

I already had a successful career as a nurse working with one of the best-known cardiologists in the country; helping him with his clinic, surgery, and research; even writing papers on my own. But it wasn’t enough. As a young woman I had wanted to be a doctor, but my mother, who never had much faith in my potential, laughed outright when I told her. She assured me I could never make it through medical school, and I didn’t have the confidence then that I could prove her wrong.

“Be a nurse,” she said. “You’ll be lucky if you can manage that.” She was a good woman in many ways, but where I was concerned, that goodness was often withheld.

Now, years later, I wanted to finish what I started and get a Ph.D. or an M.D. I moved to a small town in Southern California and started taking a few classes. I had graduated from nursing school, but not from college. I used to run by the ocean, and one of my favorite spots was called Swami’s Beach. I didn’t know at the time that it was named after Paramhansa Yogananda, who before he was Paramhansa was called Swami. That beach was right next to his seaside hermitage.

Often when i was there, funny things would happen to me. I couldn’t just sail past Swami’s Beach the way I could any other. Often I would have to slow down, or even sit for a while. One time when I was sitting there, an inner voice spoke with irresistible power.

“You have to be a physician. You will need to go to a top Ivy League medical school because you will practice in unusual ways and you’ll need this for credibility.”

I am capable, but I have never been “school smart.” Still, there was no counter thought to this one. Without hesitation i applied to medical school at Harvard, Yale, Duke, Stanford, and a couple of others easier to get into. I had faith in what I had been told, but felt I should also be practical.

Stanford and Yale accepted me outright. Duke put me on their wait list. Harvard said no. I chose Stanford and had a great four years. I was only an average student, but I excelled in other ways. I was a natural with the patients and a leader among the students. When graduation came, I was chosen to give the student address and introduce the guest speaker.

A few days before the ceremony, the dean of the Medical School called me into his office. We had become good friends.

“We can’t find your undergraduate degree,” he said to me.

“That’s impossible,” he said. “We would never accept a student who didn’t have a college degree. Furthermore, we can’t give you your M.D. unless you already have your B.A.”

Even though he spoke forcefully, I wasn’t the slightest bit flustered. By that time I had become a disciple of Paramhansa Yogananda and felt it was he who had spoken to me on Swami’s Beach that day. The dean was not in charge of my medical career; Yogananda was.

“Well,” I said, “you do have a problem. You are in good company, though. Duke and Yale also accepted me without a degree.” Then I spoke forcefully, “I am going to graduate with my class. It is up to you to figure out how.”

About the Author
Loved and Protected