I have been blessed to witness what many souls would call a miracle through the healing power of prayers. Yogananda’s healing prayer techniques utilize the natural law of electromagnetism and healing energy transmission through the hands and spiritual eye. I have witnessed these prayers work and the following story is another example very dear to my heart of their immense power.

At 7:30 pm on November 5th 2011, my husband, Leon, and I were pulling into the driveway after being away at a conference when a local police car drove up immediately behind us. The officer came over to us as we got out of the car and said, “We’ve been trying to reach you. Your son has been in a serious accident and is in critical condition with a head injury. Here are some numbers to call.”

My heart sank as Leon and I both assimilated the shock and meaning of these words. I heard myself say, “My baby! My baby!”

We called the numbers and learned our 20 year old son, Ben, had been riding his bike without a helmet down a hill at about 30 miles per hour when a car turned left in front of him. He rode into the car on his bike and flew 20 to 30 feet and landed on his head on the pavement earlier that afternoon. The doctor in the emergency room shared Ben had a large laceration that required 12 staples in the back of his head, a fracture in his skull, bruises and multiple bleeds in his brain.

Leon and I prepared to drive the four hours to Albany Medical Center, New York, from our home in southern Maine.

Trembling inside, I collected myself enough while packing to talk to Divine Mother. I told her, “Ben is Your child and I’m only his mom ‘this time’. I surrender to Your will for Ben whatever it is”. I very firmly demanded, “You’re going to have to give me the strength to do this and do it through me! I don’t know how to do this!”

Leon and I set off to drive the longest four hour drive we’ve ever driven. We called family members and emailed friends asking for prayers for Ben.

Nayaswami Devi was the first email responder and she wrote, “We are praying for Ben’s complete recovery. Stay in the bubble of God’s peace, light, and love. Your friends in God,” Jyotish and devi.

What helpful words! Thank you Devi! I practiced the Hong Sau meditation technique and was able to stay relatively calm in God’s bubble of peace, light and love the remainder of the drive and subsequent days.

Leon and I arrived at Albany Medical Center at 12:30 am and were directed to the surgical Intensive Care Unit. Thirty or so of Ben’s friends greeted us in the waiting area eager to learn how Ben was doing.

Leon and I were admitted and taken to Ben. He was “asleep” and his face was very pale and yet I felt he was “present”. I reassured him he’d be fine in soft words as I stroked his hair.

We were told the jostling of his brain inside his skull at the time of the accident caused nerve shearing between the two hemispheres. We watched the nurses check his pupils and saw they were equal and reactive to light and he could move his thumb when pinched. Thank you God! We were told Ben might need surgery to remove part of his skull if his brain swelled too much and that’s why he was in the surgical ICU being monitored. Leon and I placed a pellet of Arnica 30C inside Ben’s lower lip every hour in hopes of preventing further brain swelling.

Around 3:30 am I went to the hotel that had been reserved for us while Leon stayed by Ben’s side. Upon waking from a short, fitful sleep I prayed and meditated and felt the underlying unity of Divine Mother’s presence in all souls reassuring me Ben would recover. Tears of love and gratitude swelled up from my heart!

I sang the song, Brothers, by Swami Kriyananda as I let myself feel the underlying Unity that connects us all and thought of Ben’s brothers and sisters waiting in vigil the previous night. (The vigil continued the 10 days Ben was at Albany Medical Center) I also felt Unity with the many souls who were already praying deeply on Ben’s behalf and how “one life beneath the surface makes us brothers”.

November 6th, that first day after the accident Ben softly spoke a few precious words to me, “Hi mama”. Leon and I greeted dozens of Ben’s dear friends and discussed the accident and care as each one came in to see Ben. I told everyone he’d recover because he wasn’t paralyzed and was responding to the hourly stimuli from the nurses. (I had also felt Divine Mother’s reassurance that morning)

Some close relatives came up from Connecticut to see Ben. I was told, “Though we don’t believe, we’ll be praying for Ben”. (Those same relatives two weeks later were saying what a miracle it was that Ben was recovering so well!)

As we were leaving to get a little dinner that evening, the nurse asked Ben, “Would you like to join your family for dinner Ben?” He replied in partial consciousness, “no breakfast” and gestured a slight wave to us as we departed.

Tuesday, November 8th, I received reassurances from Swamiji’s assistants that Swamiji was aware of Ben’s accident and was praying for him. Mary Kretzmann, who leads the Ananda Healing Prayer Ministry, had emailed a photo I’d taken of Ben the first day in the ICU. The email to me shared Swamiji looked at the photo on the computer screen in India very closely and after a few minutes he quietly said, “It’s okay”.

Time entered a new dimension with ongoing visitors and caring attention to our beloved in critical condition. Friends and family came from the west coast and sat by Ben’s bed waiting for him to “wake up”. The veil of delusion was thinner than usual. Personalities melted away as we showered Ben with our hearts love.

Over the next few weeks as he began to regain consciousness, Ben wept numerous times sharing how much love he felt in his heart. I knew he was feeling not only the loving presence of those of us with him but of all who were praying for him around the world. Divine Mother’s love bathed him through all these brothers and sisters.

One week after Ben’s accident, the driver of the car that had turned left in front of him on his bike came to visit Ben with his wife. The poor man had been severely traumatized by the accident and was afraid to visit Ben until he was out of critical care. They had been praying all week for Ben’s recovery. The sweet man said, “I don’t know if you believe in God but He is real and He’s watching out for all of us!” We all rejoiced with tears of gratitude that Ben would live and was recovering with more periods of conscious wakefulness.

The ninth day after the accident, Ben demonstrated he could walk and eat with assistance. He was authorized to be transferred to Spaulding Rehab Hospital in Boston the next day. Upon arriving at Spaulding the doctor asked Ben why he was there. Ben responded, “I’ve been told I have a traumatic brain injury”. Ben had no recollection of his accident or the previous ten days at Albany Medical Center.

Day by day, Ben continued to heal with the coaching of numerous therapists and doctors in rehabilitation. He seemed to “come back” two weeks after his accident. A photo of me, Ben and Leon was taken that evening which I share here. He was released from the rehabilitation hospital three and a half weeks after his admittance. 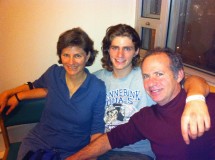 Since that time, Ben has continued to recover and regain his short term memory, processing skills and energy. I heard him say he’s “almost 100%” last night. It will be four months since the accident this weekend. He is phenomenally fortunate to be alive and recovering so quickly.

To each of you who prayed daily for Ben’s recovery, thank you for your prayers and loving support. This has been an extraordinary time and you are all a part of it! The instrument is blessed by that which flows through it.