Nayaswami Jyotish and Nayaswami Devi are accompanying Swami Kriyananda in Los Angeles, where he and the Ananda team launch the new expansion of our work.

This is the first installment of their Ananda LA blog series. Stay tuned for more!

Greetings to you from Los Angeles!

We will try to send regular news about Swami Kriyananda and Ananda team’s activities here, because we know your thoughts and prayers are with us now especially.

Most of you probably saw or heard Swamiji’s talk at the Ford Amphitheater on Sunday night (see sidebar). 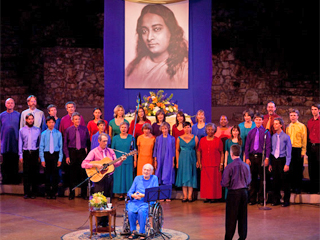 Swami Kriyananda and the choir at the Ford Theater

As Jyotish brought Swamiji back stage in his wheelchair before the program, people seated in the audience could see Swamiji being wheeled in, and they gave him a standing ovation to honor the effort he made to come.

(Editor’s note: Swami Kriyananda took a fall a few days earlier, and his health was precarious for that period of time).

It was a beautiful evening, with the Ford filled to capacity. The choir sang beautifully, Neale Donald Walsh spoke well, and Catherine Kairavi gave a great introduction to her new book Two Souls: Four Lives, The Lives and Former Lives of Paramhansa Yogananda and his disciple, Swami Kriyananda (see sidebar).

Swamiji filled the hearts of all present with devotion for God and Guru, great inspiration, and peace.

We left directly after the event with Swamiji, but Ananda people who were at the book tables said that many of those attending stayed for hours talking and getting information about how they can stay involved with Ananda. It was a great launching for the next phase of Ananda’s work in LA.

It truly was a miracle that Swamiji could travel to LA from Ananda Village, and give the speech with such strength and power. Now he’s been relaxing, resting, and visibly improving. He is getting his energy back, and is able to use his legs more all the time, making the transition from the wheelchair to using the walker. Miriam (Swamiji’s nurse) was able to get him a beautiful nayaswami blue walker and matching cane, so we’re ready for the future.

Bharavi and her twin daughters Gracie and Lexie, are being welcoming and gracious beyond anything we can describe. 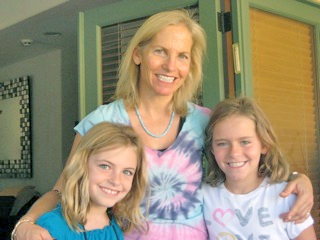 Bharavi and her children

(Editor’s note: Bharavi is one of Ananda’s core members in Los Angeles. She made her house available for Swamiji and his staff).

Swamiji’s apartment that Bharavi created from her business office is beautiful and comfortable. The rest of us are also getting settled in, and it’s really going to be a wonderful time. 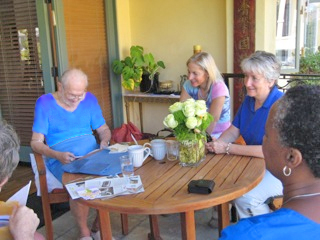 Swamiji relaxing in his new home

The first week in Los Angeles has been a busy one. In spite of recuperating from his fall on August 17, Swamiji has been launching many projects here.  The Monday after the Ford talk, he was mainly staying at home.  Then several large boxes arrived filled with fun and amazing gadgets from a catalog order he’d placed while still at Ananda Village.  He kept all of us busy trying to figure out how they worked, and entertained the 8-year old twins with al the electronic wonders.

That evening he had a long discussion with Sean Meshorer, Director of Ananda LA, about next steps for the work here. 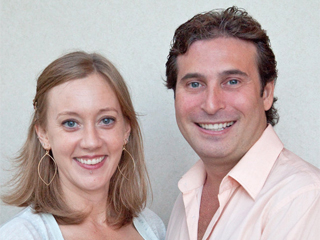 He also met with Nandini, our publicist from Ananda Assisi, and her new co-worker, Collin, who just received Kriya Initiation during Spiritual Renewal Week at Ananda Village. They are heading up the effort to manifest Swamiji’s movie The Answer about his life. Collin lived in LA for a number of years and has produced several movies. Nandini and Collin are following up with leads for investors and contacts to help move the project forward. 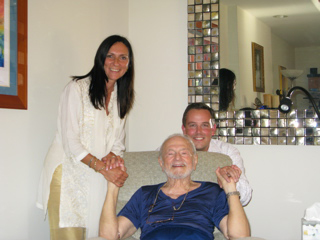 (Editor’s note: Swami Kriyananda has written scripts for two films. The Wayshower is about Yogananda’s life, and The Answer is about his own, as Yogananda’s disciple. The scripts are based on the books Autobiography of a Yogi and The New Path. Both films are in pre-production stages.)

Yesterday, August 25, was busy throughout the day. In the morning Swamiji met with Sean, Bharavi, and Jonathon, the team for The Wayshower, to discuss next steps for the film about Master’s life. Jonathon is also a disciple of Master and Kriyaban with impressive film credentials.

After the meeting, we went to a small film studio where Swamiji recorded an hour-long interview about why the movie is important in the world today, what was Master’s message, and why Swamiji wants to make a film about his guru’s life.

It was an inspiring interview which will be edited down and used for the pre-production website to draw investors. We’ll probably use the entire interview for other purposes as well.

Finally last night, Jyotish and I were planning to go to a small Open House for the West Hollywood Meditation Group. They were expecting maybe 20 people.

At about 5 pm, Swamiji asked us what the event was in the evening and would it be helpful if he came. We quickly called Sean who got the word out through Facebook and text messages.

When we arrived at the venue at 7:30 pm there were about 50 people seated in a small, rather warm room, and by 8:00 there were nearly 100, many of whom were first-timers. Swamiji gave an enthralling satsang for 90 minutes sharing about Master, the nature of bliss, and much more.

I think those present had their lives changed. Bryan McSweeny (Ananda LA’s “official” videographer) recorded it, so we’ll post it soon. 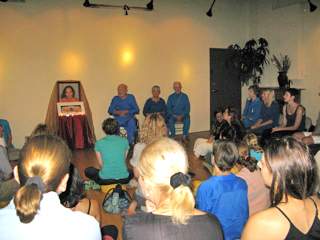 We will keep you posted as often as we can.  We send our love and friendship in God and Guru. 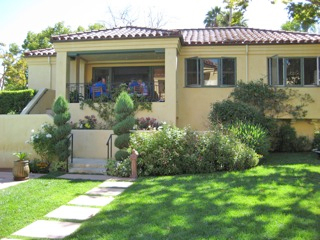 New temporary home for Swami Kriyananda and the team