Dear ones, I do not have a great deal of time for writing at this present time (the packers and shippers are upstairs packing boxes for India as I speak!), but I wanted to briefly share a delightful experience from my wonderful, and deeply inspiring visit to Ananda Village for Spiritual Renewal week.

A large group of us had gathered in Swamiji’s dome at Crystal Hermitage. Nayaswami Jyotish and Nayaswami Devi were giving a question and answer session, which, in itself was fun and deeply inspiring. Nearing the end of the evening, the mood was lighthearted. Devi was telling us of a very funny experience she and Jyotish shared recently. Laughter was resounding throughout the dome.

I happened to look at the altar immediately next to me. I was sat on the floor right by the beautiful statue of Yoganandaji. I had observed the statue quite closely earlier on in the evening because Devi was telling the group a little of its history as we were waiting for all the devotees to arrive. Sando (deceased), the artist who fashioned the statue, was directed by Swami Kriyananda when it came to fine-honing Master’s features. Swamiji would say, alter the eyes a little this way, or the mouth a bit that way, until a near perfect form of Master’s face was ready to adorn the altar. 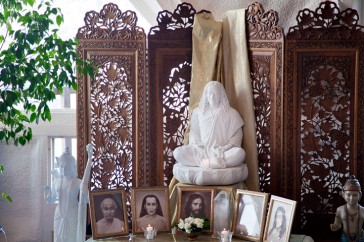 So I had studied this lovely face quite well, being so near to it. Imagine my surprise then, as Devi held her audience in tucks of laughter, when I glanced at Master’s face, only to find him with the biggest grin and not only that, but he seemed to be chuckling as well. I did a double take. I recall Jyotish glancing at me half quizzically as I did this, but then gave it no more thought as he carried on laughing himself.

I pinched myself, for not only was Master appearing to me grinning and chuckling, but his face had become alive with a ‘glow’ that was not of the physical light that we know. I can describe it no better than that because I know no words to illustrate the vibrancy that was emanating from this statue, not just visually, but I felt his joy in my heart also.

I held the statue in my gaze as long as I could, looking away briefly out of courtesy to the speakers, but when I glanced back he was still ‘there’. When the evening came to an end I looked again. Master had vacated the scene. The statue was merely a statue.

Dears, believe what you will, but I know that Master was indeed present that night and enjoying Devi’s hilarious tale with the rest of us, and why would he not, when he has become the Sea of Mirth Itself?*

*pertaining to Master’s poem Samadhi, from Whispers from Eternity