A shining light has passed out of this world, and into another. It’s joyful and sad at the same time.

Maria and I worked together for the last five years, I supporting her role as the webmaster for Ananda.org and other Ananda Worldwide sites. What little I can share in words to tell you what she was like, I’ll try to do here. 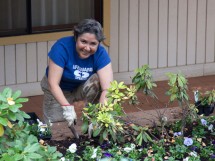 Willingness, like a thread, ran through our entire friendship and working relationship. Simply taking the job of webmaster, was for her — someone with no deep technical ability, and no website experience — an act of sincere, deep willingness to serve her Guru in whatever way he asked.

Websites are complicated animals!: temperamental, cryptic, and occasionally incredibly confusing. We’ve run into cases, for example, where leaving out one double quote could destroy half a page. If that doesn’t sound bad enough in itself, imagine trying to find that missing double quote mark in a sea of brackets and code!

She committed long and often arduous hours to training, working during the day and reading even late into the night. She sometimes had trouble sleeping, and it wasn’t unusual to get an email from her at 11:00 pm, 1:00 am, or later, with a new idea for the website. (She joked about how reading this late was a bad idea, since it always increased our workload. But many inspirations came in that way, and much interesting instruction for me.)

I tried to match her work ethic early on in our time together, but found that I couldn’t. She had reached a level of balance that was still beyond me.

Humor played a large part in our friendship — the same humor that she shared in her talks. She sometimes found things amusing that seemed to me very serious.

For example, regarding her breast cancer in 2006, and possible resulting death, she said, “I’m not finished being cooked, and I don’t want to go half-baked!” In other words, she didn’t want to leave before her spiritual mission was done. An amusing way to put it.

(This is a very small example; read more in the comments on this page, and on Maria’s memorial page.)

Her willingness to serve extended, as far as I could see, to every aspect of her life. She once told a friend and I that a daily prayer of hers was simply to be useful to God and Guru. That’s a no-frills prayer, beautiful and simple.

Gratitude was another quality she expressed that I was grateful for! She’d sometimes remark on how insightful Jyotish or another Ananda minister was, or say, as she often did, “If our jobs aren’t just the bee’s knees, I’ll eat my boots. I mean it, Nabha — I’ll eat my boots.”

From time to time, we had difficulties working together, working as closely as we did for so long. At these times, particularly the last, about a year ago, I found she was much more willing than I was to change. Going into the story would take too long right now, so I’ll leave it at this.

In Maria, I experienced a readiness to forgive and forget, and a willingness to love without asking for anything in return, that I’ve never seen so clearly and so up close.

Even so, I didn’t perceive her saintliness, as others have. Several times over the years I felt a deep stillness coming from her, and thought, “What, that’s Maria? I must be mistaken.”

I identified her, mistakenly, with the superficial aspect of our daily life. Only now in these last few weeks, with her blessings flowing out and felt by so many, has the picture become clearer for me as to who she truly is and was.

A year after we began working together, Maria was diagnosed with breast cancer, and decided to undergo chemotherapy. Her courage during this time is described in her memorial page also.

During this time her willingness — again — was inspiring. She was willing to not pity herself; to focus on serving God, and serving Him in others; and to continue to make the effort to forget herself even when the natural flow of energy would have been in the complete opposite direction. At times of great suffering, there is usually the temptation, which most of us give in to, to think, “Oh, poor me!”

I think she fought this downward pull and won. Swami Kriyananda spoke of this trial as a time when she gained a great deal of spiritual maturity.

My favorite talk of Maria’s is relatively recent: from Inner Renewal Week, February 2010. In this talk, she told the story of a squirrel in the days of Rama, thousands of years ago, in India.

The story is about how the Indian squirrel got his stripes. Do watch or listen to it (you can use this link for the video and this for the MP3) — it’s enjoyable, and very inspiring.

If you haven’t heard it, the story is about a squirrel that asks, “What can I, a little squirrel, do to serve Lord Rama?” What it decides to do is a small, almost insignificant thing — it being a small creature — but takes all the squirrel has, and is filled with devotion.

The squirrel’s devotion pleases Rama so much that he picks it up and strokes its back with his fingers, giving the squirrel stripes.

In the talk, Maria compared herself to this squirrel, by extension inviting us to do the same — to serve God no matter who we are or what we can do, and said,

I can serve God all day long, day in and day out, year in and year out, until my breath leaves my body — in samadhi or in death, whichever comes first — in the hope that at the end of it, my Guru will take me up in his arms and say, “Well done. Well done, little squirrel.”

About a month ago, Maria found a squirrel on the road during a walk. It had died, but she stroked it gently, and found that it was still warm. Another Ananda member came by, and the two of them carried it to a little resting place and said a prayer for it.

I think God sometimes sends us messages through stories that play out in our lives. If so, this tale may have foreshadowed not only her passing, but also how in the end she was “picked up” in the arms of her Guru, in perfect inner freedom.

Jyotish and Devi, in a recent talk with us at the Ananda Sangha offices of Ananda Village, said that Maria has reached more people, through her work on Ananda websites, than any disciple of Yogananda other than Swami Kriyananda.

That is something to think about. When I think of it, I feel awe, gratitude, and joy. For this, but for her spiritual progress most especially, I can imagine Master saying to her in heaven,